Watch potash, which is one commodity that is completely off the radar of investors in the West, but are desperately sought after by consumers in the East.  Potash was hit hard by the global credit crisis and has been basing for a few years.  This reflation by boosting liquidity into the system to stabilize the credit markets by Central Banks could boost potash prices which have been depressed.

Potash is a fertilizer that is critical for emerging economies with rising populations that need increasing amounts of food.  Most of the supply is controlled by a handful of companies such as Potash Corp. of Saskatchewan (POT) and Mosaic (MOS).  These companies control pricing and some of the large consumers may want to secure more affordable long term supplies.  If demand increases, the majors may not be able to boost mine output.  The large caps may be ready to break out as prices find support at decade long trendlines. 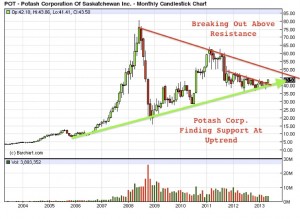 New potash deposits may be needed.  According to the charts the large fertilizer companies appear to be in an uptrend potentially ready to breakout.  This may boost the undervalued junior developers.

Why is wheat soaring and the fertilizer stocks outperforming other commodities?  Demand for higher quality food is growing rapidly in Brazil, India and China.  India spends more on fertilizer every year than it does on national security.

Investors looking to profit on rising inflation, increasing demand for high quality food and decreasing arable land should look for exposure to potash.

Conservative investors should add shares of large producers Potash Corp and Mosaic, which are both bouncing off long term support and are in uptrends.  Rising prices of the majors will boost demand for junior developers that will be able to compete against them.

Speculators looking for greater leverage should study Passport Potash (PPI.V or PPRTF).  The share price is extremely undervalued and could move up ten-fold, if we see anything similar to the 2010 or 2007 potash rally.  That is if it isn’t bought out by Indian or Chinese consumers beforehand.

Passport just announced the acquisition of strategic new land in the Holbrook Basin in Arizona.  Passport Potash President and CEO, Joshua Bleak, commented: "We are very pleased with the action of the ASLD, and the speed with which Commissioner Vanessa Hickman made a decision to free up these lands for potential potash development. It is a testament to the strength of the Commissioner and her team, particularly in the minerals section, that they recognized the significant value these lands would provide to the State Trust for decades to come, which we believe is evidenced by the speed with which a decision was made. The Department has always indicated that they are supportive of potash development in the Holbrook Basin, and this action evidences that support."

In March 2013, the company announced a Preliminary Economic Assessment which showed a NPV of over $2 billion.  This is remarkable considering the fact that Passport Potash has a market cap of less than $35 million.  The company is trading at a ridiculously low level of less than 2% of NAV. 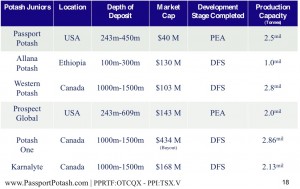 Despite this impressive PEA, which I believed would be a major catalyst, the share price has corrected.  This may have been caused by the overall weak market which is forcing investors to sell their liquid positions like Passport on good news to cover their losses in illiquid situations.

This provides what I  believe to be even a greater buying opportunity.  With this PEA, Passport Potash can meet with end users and show them that this project is economic.  Not only is it potentially profitable but it can be lower cost that some of the other projects at a similar stage. 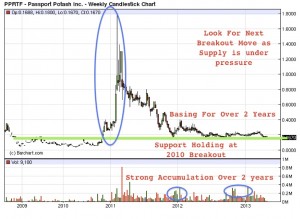 Do not forget it is in Arizona, an extremely mining friendly jurisdiction with infrastructure.  With the markets forecasting a global recovery and rebound, an undervalued, high quality potash play could provide great leverage.

Do not be surprised to see strategic partners such as the Chinese or the Indians to come on board.   It should be noted the project is located near rail lines and has two major highways that intersect the property.  Because it is a shallow deposit its production costs could be significantly lower than its peers.

Passport is currently working on a Prefeasibility Study and methods to even improve the already impressive economics.  As the majors breakout, look for some of the junior developers like Passport to possibly reverse higher and provide great leverage to rising potash demand.

Listen to my recent interview with Passport Potash CEO Josh Bleak where we discuss the junior potash sector and how Passport’s recent PEA shows some strategic advantages by clicking here or on the video player below.

Disclosure: Author is long Passport Potash and the company is a sponsor on my website.