Big news hits the fertilizer sector as Bloomberg reports that Potash Corp (POT) and Agrium (AGU) are in advance M&A discussions.  If Bloomberg is true then this could be a major catalyst for the sector.  Potash Corp is the world's second largest producer and a merger with Agrium could mark a bottom in the agricultural sectors which has been declining for years.  Both companies are struggling cutting dividends and taking losses as emerging economies such as India and China have been waiting on the sidelines to sign contracts.  Today's action may be signalling the end of this downtrend. 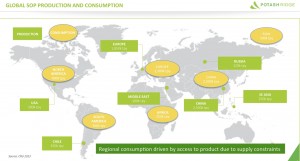 For a couple of months now I have been looking into the agriculture and food sector as it has become so cheap.  As inflation rears its ugly head high quality agriculture stocks could soar as food prices rise.  Witness the recent move in gold stocks, six months ago no one touched them now investors can't get enough of it as the gold price has jumped a couple of hundred dollars.

Similarly, the agricultural market may be in the early stages of a major turnaround not seen in many years.
A few years ago in 2013 the Russians dissolved the potash alliance with Belarus undercutting their neighbors in pricing.  This led to an overall decline in fertilizer costs and food prices which hit multiyear record lows for wheat, corn and many other foods.

However, that may be changing  as Belarus may once again work with the Russians to set a floor to pricing.  Fertilizer stocks may be bottoming such as Potash Corp, Agrium and Mosaic. These developments must be monitored in Belarus as this could set a floor to the global agricultural market which has been in decline since the Credit Crisis.  Also a merger with Potash Corp and Agrium could signal a bottom for the potash sector. 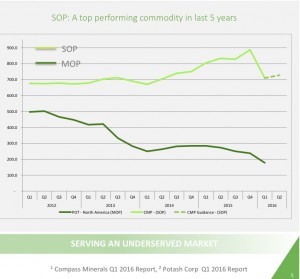 Emerging economies such as China and India are the largest consumers and these deals could be the sign of a turning point in the recent downturn in global food prices.

Don’t confuse SOP with Regular Potash.  Sulfate of Potash is a premium product to regular potash costing triple the amount as it is requited for higher end vegetables, nuts and fruits which can’t handle the chlorine from regular potash.  While the Russian have crashed the regular potash market over the past 3 years, SOP is one of the better performing commodities outperforming many other commodities.

Potash Ridge has two major SOP properties, Valleyfield in Quebec and Blawn Mountain in Utah.  The company’s goal is to get Valleyfield into production by the 4th quarter of 2017.  Potash Ridge is currently permitting and exploring financing options.  Once these areas are de-risked I expect a major re-rating.

Potash Ridge is working with SNC Lavalin (SNC.TO) on environmental studies needed to apply to the Quebec Government to certify the Valleyfield processing facility using 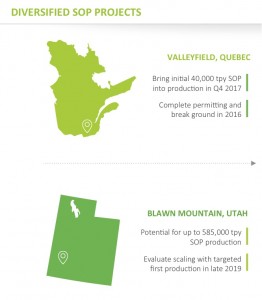 In addition to Valleyfield in Quebec, Blawn Mountain in Utah is where I see the huge leverage to the SOP market.  This could produce more than 10x that of Valleyfield annually and change the US from an importer to exporter of this critical fertilizer which is critical for places like Africa where there are current food shortages.  Blawn Mountain could come into production by the end of this decade.  Potash Ridge is led by management who worked for a major producing nickel mining company called Sherritt (S.TO).

Recently, Potash Ridge announced a Memo of Understanding with SNC Lavalin to develop Blawn Mountain in Utah.  SNC is looking to scale down the 2013 prefeasibility study so that it could help production be more attainable in a timely manner.

Within the next five years, Potash Ridge (PRK.TO or POTRF) could be the largest producer of SOP in North America.  This may be attracting smart money as the company has been able to raise several equity financings this year with some smart mining investors.  The current market cap is small relative to their asset base and what it could possibly be valued at if they get into production and are able to execute on the construction financing.

Disclosure:
I own securities in Potash Ridge and they are a paid advertising sponsor on my website. This should be considered a conflict of interest as I could benefit from price/volume increase and have been compensated.  See full disclaimer and current advertising rates by clicking on the following link:

Section 17(b) provides that:
“It shall be unlawful for any person, by the use of any means or
instruments of transportation or communication in interstate commerce or by the use of the mails, to publish, give publicity to, or circulate any notice, circular, advertisement, newspaper, article, letter, investment service, or communication, which, though not purporting to offer a security for sale, describes such security for a consideration received or to be received, directly or indirectly, from an issuer, underwriter, or dealer, without fully disclosing the receipt, whether past or prospective, of such consideration and the amount thereof.”