In theater a farce is a comedy that uses disguises, costumes and ruses to make believe unlikely scenarios.  Over the past couple of years, we may have witnessed this bizarre script play out in the energy sector.

For awhile, one common misbelief among investors has been that fracking is the panacea that would solve the world's energy problems.  Many investors have incorrectly ignored the coal and nuclear sector as a viable alternative.

However, for many months I warned my readers to be careful of what you read.  Natural gas is historically volatile and that coal and nuclear is crucial for modern industrial nations to utilize in their energy mix.

Natural gas is now breaking the $4 barrier and appears to be headed higher as supplies are tight due to increased demand and limited production.  There is also increasing opposition to fracking especially on groundwater contamination. 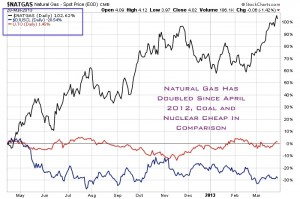 Natural Gas has doubled since the peak of the fracking bubble.   For over two years the coal and nuclear stocks have been ignored by this fracking farce that natural gas would be the sole source of our energy future.  Now coal and nuclear may once again be seen as a competitive alternative.

Coal is about to regain its status by the investment community as the world's king of energy.  Coal has been used for hundreds of years and was traded as a commodity as far back as the Roman Empire.  It will be used in this generation and long after.

In 2012, the natural gas lobby was calling the death of King Coal.  This may have been premature.  Coal is still the largest source of baseload power providing around 35% of the electricity worldwide.

In addition to providing cheap power, the iron and steel industry requires the use of metallurgical coal.  The coal industry provides around 100k high paying US jobs and the U.S. Federal, State and local governments receive over $20 billion annually from the industry.

However, the real growth will come from emerging economies especially in Asia.  Demand is expected to double by 2020 and they are increasingly looking for the cleaner, low sulfur coal.

In the past ten years the seaborne and export markets have been a big boom for the sector and we saw a major increase in M&A up until 2011.  Coal is used more than any other source of electricity in America, despite record low natural gas prices in 2012.

Interestingly, even with the increase in coal consumption over the past few decades the EPA data is showing that noxious emissions have been significantly reduced over the past 30-40 years.  New technologies and higher coal standards have helped.

By 2015 with stricter standards in place, emissions should be even further reduced.  Rhode Island (natural gas) and Vermont (nuclear) are the only states that do not use coal.

In over 20 states coal powers more than half of their electricity.  These states with the higher coal usage have significantly lower electricity costs.

The coal stocks have had a rough couple of years since 2011.  The sector has been painted in a negative light by the natural gas lobby which claimed when natural gas hit a bottom at $2 that natural gas would be the answer for the global energy future.

Investors are beginning to realize shale gas may be abundant in the U.S. but it is not abundant worldwide.  It is not affordable for Asian countries which do not have domestic supplies.  China has just signed a major gas deal with Russia which may indicate to contrarian investors like us that the global powers are looking to secure energy supplies for their growing economies.  These emerging nations require a mix of natural gas, coal and nuclear.

The spot prices of natural gas may breakthrough a psychological barrier of $4.  Once this occurs look for increased investment in the undervalued coal stocks some of which are priced at below liquidation levels.

The most attractive time to buy a sector is when it reaches a point where there is little risk of falling further trading at “going out of business” valuations.

Coal should be bottoming out soon, nevertheless, investors must do their homework in this sector as it faces increasing scrutiny from Federal agencies that will cut dirty coal with high sulfur, mercury and arsenic.

Not all of the coal miners will succeed.  There are different types of coals.  High sulfur, mercury and arsenic coal will not make the cut both in the U.S. and in Asia as emerging nations look to reduce air pollution.

Right now there are still many power plants that burn high sulfur coals but this should begin to go away in 2015.  Asia is also increasing regulations that will eventually move to low sulfur, mercury and arsenic coals.

Utilities and industries are looking for clean coal that has a low percentage of these unwanted byproducts, which produce noxious emissions.

The coal and the power industry have worked collaboratively to reduce sulfur emissions by using lower sulfur coals and introducing various cleaner technologies. Going forward regulations will become even more stringent and arsenic and mercury have been added to the mix.

Therefore, coals with favorable sulfur, mercury and arsenic characteristics will be in high demand come 2015/2016 and potentially command higher pricing.

The rebound in housing and construction from a record amount of fiat money being pumped into it may be causing a pickup in U.S. demand for power.  Coal demand should pick up this summer as natural gas has almost doubled off its $2 low in 2012.

Not all the coal companies will succeed.  Look for coal companies which have increasing revenues and margins as that could be a sign that utilities and industries want the company's higher quality coal.  Stockpiles for the high ash coal are increasing.

However, finding the clean coals that are above the EPA's standards are rare.  These coals will receive premium pricing and increased demand. Also look for companies which have inroads into the seaborne markets which could supply the increased demand coming from Asia.

Investors should remember that coal is one of the most abundant and cheapest fuel sources.  Consumption of electricity is increasing rapidly and coal costs are relatively low.

King Coal is still the leading source of power for America especially as electricity demands increase.  From 1970 until 2000 electricity consumption increased close to 150%.  Coal prices remained relatively flat during that time providing a cheap source of power for manufacturing and industry.  Coal prices are more stable then oil or natural gas prices which have greater price volatility.

Most likely the computer you are reading this bulletin on is powered by coal.  The average American uses about 20 pounds of coal everyday.  If the U.S. wants to become less dependent on Middle Eastern Oil, we have got to produce more higher quality coal at home.

Coal is the easiest and safest fossil fuel to use and transport.  It is a stable material that does not have the risk of spillage problems like oil and gas.

Due to the large reserves of coal, The U.S. still has some of the lowest electricity costs in the global economy.  Producing the high quality, low sulfur coal will allow the industry to meet the environmental standards.

Natural gas is testing new highs at the psychological barrier of $4.  Investors may begin to realize that in comparison coal prices have historically been more stable and affordable.

Remember sulfur dioxide emissions from U.S. coal plants have declined 20% since 1970, while consumption has tripled over the same time period.  This is a result of the coal industry using lower sulfur coals and new scrubbing technologies.

Canam Coal (COE.V or COECF) is optimistic about the coal markets and the momentum they have been building at their four producing mines near Birmingham, Alabama and two under development.  Since November of 2009, the Company has completed two acquisitions. 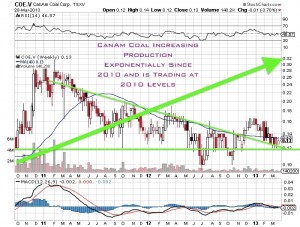 Canam supplies about 40% of its production to local Alabama power and about 60% to local industries.  Customers for Canam's coal are within short distance to the mines.

At the end of last year, Canam was awarded two new contracts to local Alabama industrial users.  The company expects its high quality, low sulfur coal will receive premium pricing and that volumes should grow. 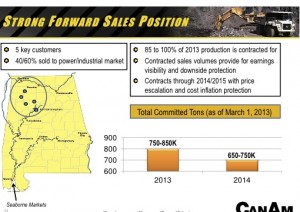 Most of Canam's production is sold out until 2014-2015.  The company is looking to extend the contracts through 2020.    Canam is one of the only coal companies with growing and glowing fundamentals during a difficult time for the sector.

Some of their newer mines are about to reach full production and Canam could possibly double volume.  Remember Canam's coal receives premium pricing as it is low in sulfur, mercury and arsenic should meet new Federal regulations coming into effect.

Canam is being priced at liquidation levels with an updated equipment fleet, millions of tons of high quality-low sulfur  coal reserves, a committed local customer base and committed sales contracts.  The company is trading way below book value.  Take a look at the Canadian and US listed coal companies in comparison. 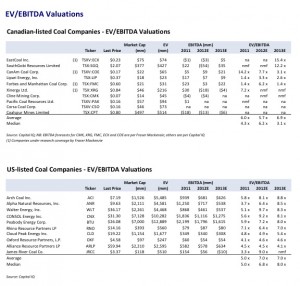 Canam Coal is the only coal miner I am aware of that during this correction in the sector has shown increasing EBITDA.  Canam’s enterprise value is more than quadruple its market cap.

I recently took a trip to Birmingham, AL to visit the properties with CanAm CEO Jos De Smedt and Bob Lewis President of Birmingham Coal and Coke(BCC). 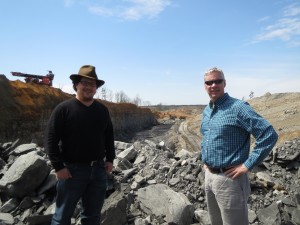 Canam acquired 80% of BCC in 2011 and 2012.  Bob had the foresight years ago to look for and acquire the high quality, low sulfur coal in Alabama.

I was extremely impressed at the quality of the mining operations and the local labor talent, many who have been surface coal miners for generations.  The company is looking to grow to produce over 1 million tons and wants to eventually grow production to 3 million tons per year.

Canam has focused on surface coal mining which is non-unionized and has significantly less costs.  The mines are located with great infrastructure and local support as coal mining has been a way of life for this community for more than 100 years.

The properties are near major highways and within easy access to local ports and seaborne markets.  Canam is run by 30 year Alabama coal veterans who have around a 25% ownership in Canam.

Canam may be the undiscovered leader of the next rebound in coal.  Now investors can buy Canam at a significant undervaluation to its peers.

The great investors take advantage of misplaced assets, hold them and wait until the rest of the world realizes the value.  Take this opportunity from the foolish selling in coal.

Coal will rebound and within the sector there are valuable diamonds such as Canam Coal (COE.V or COECF), which is truly trading at a fraction of what it is really worth.  Don't follow the bandwagon.

Coal will survive and investors who do their homework can find quality juniors like Canam who are increasing EBITDA, sales and in a position to increase margins. 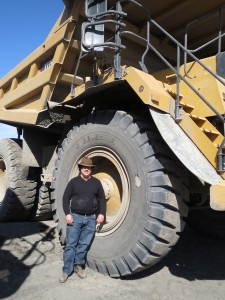 This may be a great opportunity as natural gas breaks $4 to buy a junior coal company that has increasing momentum and positive fundamentals with cash flow unlike many other speculative small cap resource stocks.  CanAm Coal is a growing coal producer in mining friendly Alabama trading at rock bottom levels and has earnings certainty in a financial environment which is looking for cash flow and sustainability.

Listen to my recent interview with the CEO below.

Disclosure: Author and Interviewer owns CanAm Coal shares and CanAm Coal is a sponsor on my website.