Insider Buying May Indicate A Comeback For Coal Stocks

I have recently written about a potential rebound in coal.  It is a hated sector by fellow analysts and the investment community as the consensus believes that coal is dead.  Hardly anyone covers this sector right now, which provides astute investors with discounted situations.  Incidentally, a Barron's article highlighted the insider buying in the coal sector at a time of extreme negative pessimism.  This could indicate a bottom for the coal sector.

Coal giant Walter Energy (WLT) had 11 insider buys of over 2 million shares most notably over $150k from CEO Walter Scheller.  Natural Resources Partner (NRP) had two insider buys.  Another junior U.S. coal producer in Alabama, which I have highlighted for some time is Canam Coal (COE.V or COECF).  The CEO Jos De Smedt bought 149,000 shares at the end of May. As the old saying goes, insiders may sell for many reasons but they buy for only one...potential profit.

I have learned to tread against popular opinion and that great wealth is found during times like these and follow the insiders and the smart money.  As Mark Twain said wisely, “Whenever you find yourself on the side of the majority, it is time to pause and reflect.”

I see comments all across the media that natural gas is the future as it is abundant and cheap.  Do they not realize that natural gas over the past year is up over 70% outpacing the Nikkei and S&P500?

When natural gas was cheaper some plants may have converted from coal to natural gas, but now the price rise above $4 may mean this fuel source is becoming just too expensive. 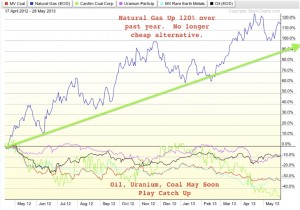 Do not forget that coal is still the most used source of energy in North America and around the world.  Natural gas is up 120% over the past 12 months, while the rare earths and coal are down approximately 30% and oil and uranium are down 10%.   It would cost hundreds of billions of dollars to replace coal with natural gas and decades for U.S. utilities to make such a transition if they choose to do so which is doubtful.  The historical price of natural gas is much more volatile than coal.

Although the U.S. has abundant shale oil reserves the rest of the world does not and pays much higher prices.  Major coal companies such as Peabody Energy is seeing increased demand from Asian nations who do not have large reserves of natural gas.

Many are saying China is slowing in the short term, however I believe over the long term China’s expanding economy will need increasing amounts of cleaner and higher quality coals both for thermal and metallurgical applications to produce steel.   In addition, Japan and Germany have been boosting their imports of coal to record levels.  They must make up for the power that was lost from the nuclear reactors that have been shut down after Fukushima.

Remember Japan was the largest importer of coal in the world before Fukushima even with all of their nuclear plants operating.  Japan has been dealing with a declining yen and rising natural gas prices.  They may be forced to import increasing amounts of cheaper coal.

There are many emerging nations where people have no access to the electric grid.  Countries are looking to modernize their infrastructure affordably.  Coal is economically viable for many of these nations.

Countries like India which had a major power outage recently, need to import cleaner coals from the U.S. as their domestic coal has high ash and sulfur, which contributes to dangerously high air pollution levels.  I know that the natural gas boom in the U.S. is remarkable, but the infrastructure in many parts of the country is not suitable for the utilization of the energy source.  When natural gas hit record lows more than a year ago at $2, natural gas plants were running at full speed and still coal needed to be used.

Do not forget the increasing violence and geopolitical turmoil in the Middle East and North Africa.  A turn for the worse in this region could drive oil prices above $100 a barrel.  The U.S. may cut back on oil imports and look to turn to safer coal, which is abundant domestically.  The coal sector is a major employer throughout the United States.

Fundamentally, coal is certainly not dead, but the coal equities are certainly priced for the graveyard.  Large coal miners like Peabody, Alpha Natural Resources and Arch Coal trade for less than their liquidation value.  The large players have challenges.  Underground coal mining is unionized and many companies can’t pay the costs of the benefits and pensions.  The large companies also have some lower quality coals that must be washed or stockpiled due to increasing EPA standards.

I know people say this is the golden era for natural gas and that it is a very tough time for coal.  Investors must be selective, but I believe there are still opportunities in coal to the astute investor.  I have learned from many years of speculating that the best time to buy is not when times are great for a sector, but when times were tough.  The pessimism and negativity plant the seeds for the blossoming of major gains.

Times are certainly tough for smaller coal miners, but the management at CanAm Coal (COE.V or COECF) believes in the long term viability of coal as a fuel source and that demand will grow going forward.  Asian demand is still very strong with coal growing almost 20% over the next few years in this region.  Despite these difficult times for the sector, CanAm Coal had a record year in 2012 producing over 455,000 tons of coal in mining friendly Alabama.  I had the privilege to visit CanAm's mines in March and they are rapidly expanding production.  This is almost a ten fold increase from 2010 demonstrating significant production growth. 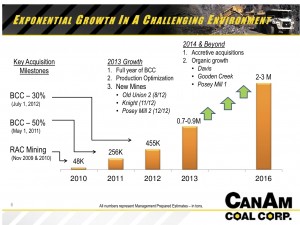 Over the next three years CanAm's goal is to possibly produce 2-3 million tons of high quality coal. The company is developing three new mines and has attracted a significant financial institution to fund the operations. 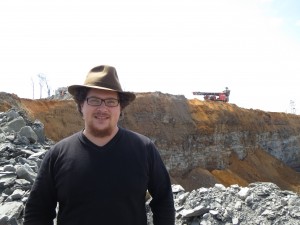 The company is well positioned for 2013 after investing a significant amount into opening up three new mines in 2012.  One of the benefits of CanAm versus some of its peers is that their miners are non-unionized. 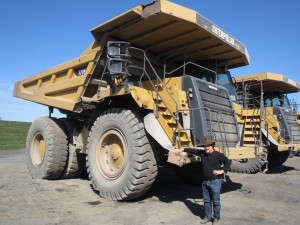 CanAm is a surface miner which does not have as many risks as underground mining.  CanAm is the recipient of the "Sentinels of Safety" Award commending safe and reliable operations.  CanAm Coal mines outside of Birmingham, Alabama where there is easy access to mines with paved roads, rivers and deep water ports.  The easy access to infrastructure reduces costs significantly. 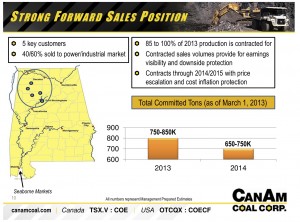 The company already has 85-100% of 2013 production sold out and close to 650-750k tons for 2014.  This provides investors with highly probable cash flow and earnings stability, which is rare to find in the junior mining market today.

The company could eventually generate a significant amount of free cash flow to make further accretive acquisitions, pay down debt, issue a dividend or buyback shares.  CanAm Coal differentiates itself from so many other junior miners and the rest of the coal sector as their production is growing while others are declining.

CanAm's quality coals are already sold out for 2013 as they meet the new EPA standards.  The company is located near the seaborne markets and there is increasing interest from overseas for higher quality coals.

The company is deeply discounted with a market cap that is less than one times EBITDA and trading near a three year low during this transitional tim.  Most of their peers trade three or four times that value and CanAm is considerably undervalued in the sector.

The mines are run by 30 year industry veterans that have put their own money on the table.  Management owns just over 25%.

In a recent press release entitled, “CanAm Completes Transition to Three New Mines and Delivers $1.9 million EBITDA in Q1 2013”, CEO Jos De Smedt states, “With our new mines fully permitted, major mine development now completed and full production levels to be achieved in the latter part of Q2 2013, further significant growth is expected in 2013. In addition, the Company's $14.5 million investment in equipment in 2012 positions CanAm to efficiently optimize production and sales from these new mines. With these building blocks in place, we look forward to strong growth into the remaining of 2013." 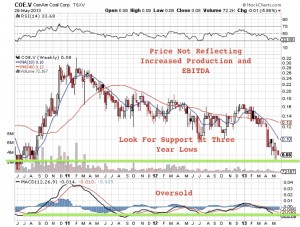 CanAm is testing three year lows, which I believe should hold.  It could fall even further below $.08, which could make it even a better buy.  CanAm has grown production ten fold, yet astute investors can acquire shares at multi-year discount lows now below $.08.

Listen to my recent interview with CanAm Coal (COE.V or COECF) CEO Jos De Smedt by clicking here... We discuss growth plans in 2013 and the record goals that were hit in 2012.

Disclosure: Author is long CanAm Coal and the company is a sponsor.