Recently the gold and silver miners have been outperforming the S&P 500 indicating that we may be seeing the rotation from overvalued equities into the undervalued miners. This is occurring on large volume indicating major investors are beginning to enter the deeply undervalued sector.  The gold miners appear to be reversing on high volume indicating that we are seeing major accumulation at these price levels. A few bullish, high volume reversal days within a couple of weeks indicates that we could be very close or at the bottom of this consolidation. 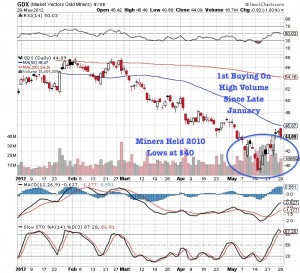 Bankia, one of the largest Spanish Banks, is struggling.  The government is stepping in to nationalize it.  Fear is rising throughout Europe that Greece will exit the Euro and the potential consequence that there may be some failures of major European banks, which may spread to the struggling U.S. banking sector.  Investors are seeing a rapid devaluation of the Euro testing 2010 lows when the Fed came riding to the rescue and announced QE2 in June of 2010.  The only way out of this debt crisis is that the ECB and the Fed will have to print money through another round of quantitative easing.

Many investors including some major institutions such as Jp Morgan and MF Global found themselves on the wrong side of the trade buying European debt and shorting the U.S. dollar.  Now as the Euro collapsed faster than expected they have to quickly move into the U.S. dollar and may be having to cover margin calls by selling their precious metals and mining stocks to record oversold levels.

Gold and silver have been forming a long base holding and bouncing off critical support levels.  So an upward move is expected earlier this summer rather than later. In 2008 when we saw a correction in precious metals and mining shares that was  followed by a powerful rally into new highs.  We expect history may not repeat, but it could certainly mimic that move.

One of our favorite miners, International Tower Hill Mines (THM or ITH), which has been on a hold recommendation for several months is reaching a record oversold level as it goes through a management transition and several analyst downgrades. Share prices are so beaten down that one Tower Hill share can control approximately .2 ounces of Livengood gold and for the price of owning one ounce of gold bullion an investor can control over 100 ounces of Livengood gold. This provides excellent leverage for THM investors to the rising long term trend in gold. We believe that this test of three year lows should hold. We will be following the chart closely.

John Hathaway, Senior managing director of Tocqueville Asset Management in his recent interview with theaureport.com said the following,"International Tower Hill Mines Ltd. (ITH:TSX; THM:NYSE.A) ... it's in Alaska. So when you read all these terrible headlines about Mali and Indonesia, Alaska sounds pretty darn good. Alaska's got infrastructure. International Tower Hill is in a mining‐friendly jurisdiction, near Fairbanks. There's every reason in the world it would want to get this thing permitted and built. I think it will. We just have to figure out how to get from here to there."

International Tower Hill Mines controls one of the largest gold mines in the world and certainly in North America with over 20 million ounces of gold just outside mining friendly Fairbanks, Alaska. Recently the CEO resigned to spend more time with his family. Some of my subscribers have been concerned about the low share price and how the company is moving forward.

Jeff Pontius, Former CEO, Founder and Director of THM discusses the steps Tower Hill Mines is taking over the next few months and why their Livengood Project is a tier one marquis asset.  As you are well aware Jeff is currently CEO of Corvus Gold, which was a spin off of International Tower Hill Mines.   Corvus just hit new 52 week highs.

In this interview, Jeff discusses why Tower Hill is similar to a call option on the price of gold as it provides significant leverage to investors who believe in the long term upward trend of precious metals and the continued worldwide debasement of fiat currency. Click below to view the interview.

THM is testing its three year lows and is 50% below the declining 200 day moving average. The 200 day usually acts as a magnet and we could see a snapback rally in many of the deeply oversold first tier projects. Remember that the Tocqueville, Paulson and Anglogold Group are supportive shareholders of this company recognizing that THM shares provide excellent leverage to the rising price of gold.

Jeb Handwerger Editor and Chief Strategist of Gold Stock Trades will be presenting and speaking at the Vancouver Conference Center East, June 3rd and 4th, 2012 for the World Resource Investment Conference brought to you by Cambridge House International.