Industrial metals outperformed precious metals in the first quarter and this is characteristic after accommodative moves from the Central Banks, which has caused investors to look for commodities essential for growing economic demand.  It may be indeed possible that QE1, QE2, Operation Twist and the $1 trillion LTRO in Europe is causing a flight out of risk off assets such as treasuries and gold into risk on stocks especially banks, homebuilders and industrial commodities.  So we see the Fed announces no new stimulus needed, only days after Bernanke says the opposite.  Ambivalence and confusion adds fuel to the eventual Golden Swan rally.

One could fight the Fed as it continues to make historic moves to refinance banks with massive bailouts by owning tangible assets such as industrial metals, graphite, uranium, heavy rare earths, etc...which may outperform during this risk on cycle.  We may be witnessing a false illusion that the economy has bottomed and further QE is unnecessary yet we see golden swans on the horizon.

These banks are still holding 1.5 million foreclosed homes that are still unsold.  We could see many foreclosure sales over the next few months, where we could see an upswing in asset sales by 25%.  This is why we recently saw Bernanke hint at additional accommodation to continue supporting a moribund economy.  We may be under the optical illusion America is doing fantastic and that the U.S. dollar will rebound.

The reality is that we may be on the verge of a coming gut wrenching inflation where prices of tangible assets could soar.  That is why we focus on wealth in the earth in politically friendly jurisdictions.  There are other potential golden swans such as increased tension with Iran and rising energy and food prices.  We may see further U.S. budget issues in the summer 2012. Last year the debt ceiling debacle caused an accelerated move to $1900 in gold.

It is not time to forget about the gold miners, who are increasing profits and decreasing costs.  Gold miners are priced at below $1200 gold right now which indicates we are nowhere near a bubble in precious metals.  Most investors think that the long term trend higher in the gold price is unsustainable.  We do not agree.  Technically, gold and silver appears to be bottoming.

On this next move higher in gold and silver, the miners could significantly outperform and play catch up.  The last time the large gold miners was this oversold in 2009 the miners doubled.  Do not be surprised if we see a bottom form soon in gold miners as investors realize that the long term trend higher in gold and silver is still intact for possibly several years to come. 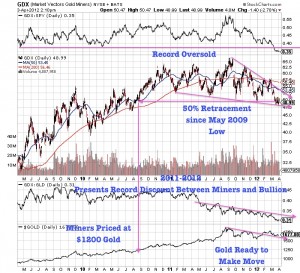 For long term precious metal investors the gold miners are a discounted way of buying gold as it is priced at significantly discounted prices.  The upward move could be exponential.  Do not forget that over the past decade the large miners have outperformed bullion.  Since the second half of 2011 we have seen a divergence where the miners have underperformed equities and the underlying bullion.

This may be a reversion to the mean as miners drastically outperformed bullion and U.S. equities for more than a decade.  We are reaching an area of support  and an oversold condition in the miners which has historically preceded a powerful upmove.  This is where we can see a move back to the long term outperformance of gold miners over other major asset classes.

Stay tuned to my premium service, free for the first 30 days by clicking here...

Disclosure: Do your own due diligence before making any investment decision.