In my premium service last week after the US Election, I told my readers to keep a close eye on the heavy rare earths especially Ucore (UCU.V or UURAF), which has significantly outperformed the beaten down and ignored rare earth sector by a wide margin. 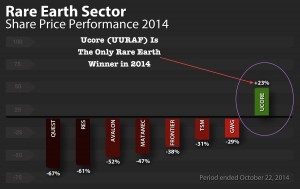 Ucore has been the major winner in 2014 and this relative outperformance may be just the beginning as they announce today a major breakthrough in rare earth metallurgy.  Ucore released results from recent testing of Molecular Recognition Technology (MRT) which produced a 99%+ HREE Concentrate from the ore from Bokan Mountain in Southeast Alaska.  The first step to separation into salt is by producing a pure concentrate which was conducted by IBC Advanced Technologies.  The company is testing to see if MRT can produce and separate the individual heavy rare earth oxides.

Jim McKenzie, President and CEO of Ucore said in the press release that “MRT is a disruptive technology in every positive sense. It’s a revolutionary alternative to the more costly, slower and environmentally invasive Solvent Extraction (SX) based methods of REE concentration and separation. What’s more, we’re excited to now be testing MRT as a platform for obtaining individual high purity rare earth oxides. This objective that has proven highly elusive in the REE processing community, outside of the more expensive and environmentally burdensome SX methodologies currently in use in China and beyond. Ucore will keep our shareholders posted on these further tests as they become available.”

It is possible that Ucore could also use this technology to help other rare earth developers in the West.  Ken Collison, COO of Ucore said. “The ability to generate an HREE enriched concentrate efficiently is crucial to the success of any rare earth project outside of China. We’re excited to be introducing MRT to the REE sector, especially given its substantial record of success in other industries and its potential for rapid, clean and cost effective throughput.”

It appears to be a clean process compared to solvent extraction.  Ed Bentzen, Project Manager of Lyntek Inc. of Lakeview, Colorado who oversaw the technical and scientific evidence said. “No solvents or pernicious chemicals are used. The highly selective separations achieved with the MRT process make REE separations and recovery at high purities possible."

See the full press release on the groundbreaking technology which could change Chinese domination of rare earths by clicking here...

Nobel Prize winning Molecular Recognition Technology is nothing new and has been around since the 1960's.  Its currently used in metals processing but Ucore is the first to utilize it for rare earth extraction and it could be a game changer.  I am excited to hear further developments of Ucore's work in advancing rare earth chemistry and metallurgy.  It appears the recent four and half month downtrend in Ucore is ending on this recent news.  I wouldn't be surprised to see Ucore breakthrough $.40 on further developments. 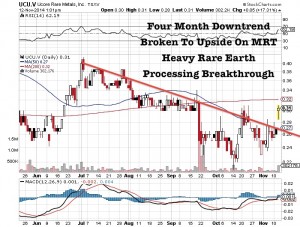 Advancing US rare earth independence is a matter of national survival.  Alaska Republican Senator Lisa Murkowski, who has been a major supporter for Ucore is taking over the Chair of the Senate Energy and Natural Resources Committee.This could be a huge political boost to bring heavy rare earth independence to the forefront of the agenda. Remember she already introduced rare earth legislation which was not being advanced.

Senator Murkowski said, "We have got to change the dynamic here, in this country, with how we view the importance of minerals to our nation...We can’t move forward until Washington (D.C.) gets out of our way...We don’t want to be sitting in a situation where the Chinese are making all of the decisions as to what we are going to be manufacturing – how, when and where – because they have access to all the critical minerals...We have got them here; we just need the ability to develop them.”

Disclosure: I am a shareholder of Ucore and the company is a website sponsor.  Do your own due diligence as I have a conflict of interest and would benefit if Ucore moves higher in value.