A few months ago, I believed uranium would bounce off lows and make a powerful move higher. The spot uranium price is beginning a rebound rallying more than $3 per lb over the past few weeks.

I alerted my readers to the reality that end users of uranium are concerned about geopolitical stability and are actively looking for safe and long term secure supplies of U3O8. Any hiccup in production could significantly impact global supply. 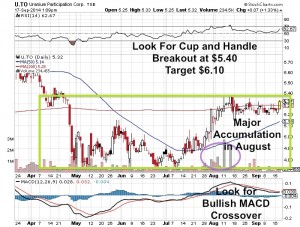 Although there is abundant amounts of uranium in North America and Australia most of the production comes from unstable areas such as Kazakhstan, Niger and Russia. The recent sanctions with Russia could have a major impact on pricing.

Russia through Rosatom operates Kazakhstan production which is the largest supplier of uranium to the world. Europe and the US are some of the largest consumers of nuclear and have relied on cheap Russian uranium for decades.

What happens when the cheap uranium runs out especially at a time when demand is growing? A price spike with triples and quadruples in the junior miners.

China is leading the nuclear renaissance where they may build hundreds of reactors over the coming generation. Despite Japan and Germany's kneejerk reaction to abandon nuclear temporarily after Fukushima, demand for uranium is rising.

Now only a few years later, Japan may turn back on their nuclear reactors and Germany may have to look at turning back on its nuclear reactors this Winter especially if Russia turns off the natural gas taps. The anti-nuke crowd may grow increasingly out of favor when the German population is freezing and in the dark.

End users may have to move quickly to secure supply from the junior uranium miners rather than rely on Russia. The major uranium producers such as Areva, Cameco and Rio Tinto have already been shutting down high cost marginal mines due to the low uranium spot price. Don't underestimate black swans with Cameco which is dealing with labor challenges and technical obstacles in the Athabasca Basin.

In conclusion, expect the uranium price rebound to continue as end users buy in the market and look to secure deals with emerging producers. The supply side is just too volatile while demand is growing. Look for the uranium miners (URA) to breakout especially these three following companies:

1) Uranerz Energy (URZ) just announced its first sale of 75,000 pounds of uranium from Nichols Ranch in Wyoming into long term contracts with nuclear utilities. 2014 has been a transformational year for Uranerz as it started uranium production and is now generating cash flow. I have followed this company for years and am happy to see U.S. produced uranium fuel these domestic plants rather than it being imported from Russia. Uranerz has three long term uranium deals with two major US nuclear utilities and has a huge land position in the Powder River Basin. Do not be surprised to see a major like Cameco acquire this new producer.

2)Looking for huge leverage to uranium?  One should consider Pele Mountain (GEM.V or GOLDF) trading at a nickel.  The company has over 82 million lbs of uranium in the inferred category.  In addition to the uranium, they own valuable rare earths and recently announced that they are working with Canmet, a branch of Natural Resources Canada on processing.  CanmetMining has a long history of supporting optimization research at Elliot Lake.  Although the processing for rare earths at Elliot Lake is well known as it produced rare earths in the 1980's, new metallurgical research could drastically improve recoveries.  Elliot Lake was home to some of the great Canadian uranium mines in prior decades which mined over 300 million pounds of uranium.  Mining could return if end users want a secure and affordable source of uranium and critical rare earths right in mining friendly Ontario.

3)Anfield Resources (ARY.V or ANLDF) just acquired from Russia's Uranium One, a US uranium mill and prospective uranium properties.  This makes Anfield one of the few potential uranium producers in the U.S. as there are only three licensed uranium mills in the entire country.  The other mill operators are trading at much higher valuations compared to Anfield.  Having the ability to mine and mill uranium is a huge advantage now for Anfield.

Disclosure: I own these three stocks and they are all website sponsors. Conflicts of interest apply. Please do your own due diligence.