The U.S. equity markets are breaking into new 15 year highs, after an unprecedented move by Bernanke to stimulate the economy over the past five years. Increasingly, investors may look to cheaper, out of favor sectors such as the uranium and rare earth sector.  These sectors are crucial for the clean carbon reducing future of emerging nations such as China and India which are dealing with dangerous levels of air pollution.

Investors may be asking themselves, where could there be the ability to outpace some of the overbought sectors such as financials and housing.  If this rotation into commodities takes hold and the rally continues, look for exceptional gains in the uranium and rare earth stocks which have been basing for over two years.  The materials sector historically lags other sectors such as the financials and industrials, but eventually outpace as a bull market develops. 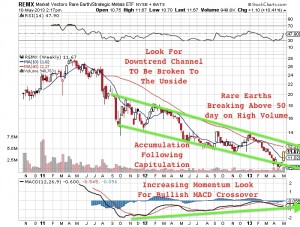 We have witnessed an extremely peculiar rally in that U.S. equities are hitting new highs at the same time that uranium and the rare earth sector is hitting a new low. This shouldn't last for much longer as a recovering global economy demands clean and cheap energy, fuel efficient vehicles and high tech products such as smart phones and Ipads.

Eventually, as the stock market climbs into new highs the dividend paying large caps become too expensive and that is when we could witness the rotation into more speculative possibilities, especially in the uranium and the rare earth mining sector, where there is potential for outsized capital gains as the need for clean carbon free energy increases.

In addition, demand for high tech products such as smart phones, Ipads, and High Definition TV’s and Monitors are growing at an unbelievable rate. This could cause supply shortages for critical metals used in lighting and monitors.

A reason for this underperformance in rare earths is that Asian markets have not yet kept pace with the rebound in US equities. However, that may change as a strong U.S. consumer is a boom for Chinese and Japanese exporters.

In the past six months, the Japanese Nikkei Index has outperformed all other markets including the United States. This may indicate the beginning of an inflationary rally in Asia and may signal that Chinese and Japanese markets may also test new highs.

The U.S. equity market is continuing to rise without any pauses or healthy corrections. This is becoming a parabolic move where caution should be exercised. In such upward moves like we are experiencing now a healthy correction would be warranted.

Due to quantitative easings and negative interest rates, investors are being herded into richly priced dividend yield paying equities and bonds, which may look nice today, but could be awful long term investments especially when we see inflation reemerge.

Look at recent rallies, the markets applaud a better than expected 7.5% unemployment rate as U.S. and European Central Banks continue to advance easy money policies. The market is looking for any moderate news to move higher.

Copper jumped higher and may be bouncing off of a major bottom around $3. Rare earths may follow that performance as well as it tracks the industrial metals closely.

With interest rates so low, investors are speculating in equities paying dividends but soon may look to enter the commodity sector which may present a better value with potentially greater gains. Do not avoid the rare earth metals sector where we may see a short covering combined with new buying from investors who are sitting with hefty gains in equities.  Double digit gains could be expected.

Industrial end users, which are hitting new highs, may secure long term sales contracts for basic raw materials such as the critical rare earths at these record low interest rates and prices. It may be exactly the time for them to invest and secure long term raw material contracts with their record cash positions and high valued stock prices.

However, the rebound in U.S. equities may soon be spreading to the East. The Nikkei has been one of the best performing markets boosted by a record devaluation of the Yen over the past 6 months. This pickup in Asian markets may boost the demand for rare earths, which are crucial for the high tech, chemical and clean energy sectors.

Lynas, one of the first rare earth producers outside of China is rallying as Malaysia voted in the pro rare earth party. Lynas has their separation plant in this county and they have been dealing with a vocal opposition of environmental activists.
Some of the Lynas opposition may be coming from Chinese sources. Remember China wants to control the rare earth market and has tightened exports before.

In addition, Molycorp Inc. (NYSE:MCP) the owner of Mountain Pass, the largest rare earth deposit outside of China, is making a powerful breakout above the 50 day moving average. This is the largest high volume gain since it went public back in the summer of 2010. The company showed sales are increasing and demand is picking up.

This recovery in the large rare earth miners may prove to be a turning point for the junior rare earth developers of critical and heavy rare earths.

In 2010, rare earth prices exploded as diplomatic tensions built up with China. The demand for these metals are rising exponentially as they are used for smart phones and TV’s which is just entering the emerging world. In the Western World, there are more than seven screens per household. In China there is less than one. 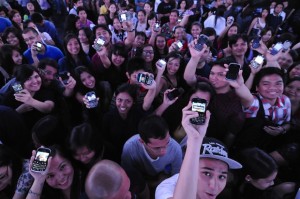 There will be a dramatic shift over the next decade in the need for rare earths especially the critical rare earths used in these screens like Europium, Terbium, Yttrium, Dysprosium and Neodymium. Rare earth prices have been under pressure due to the weak commodity environment and major stockpiling in 2010.

Nevertheless, according to many sources, industrial end users will look to secure deals possibly in the second half of 2013, which should support rare earth prices and the value of some of the junior miners I closely follow and own.

Look for the critical rare earth miners advancing towards feasibility in mining stable jurisdictions where there is a history of mining such as Pele Mountain Resources (GEM.V or GOLDF)  who is making excellent progress at its Eco Ridge Mine in Elliott Lake, Ontario that has a well established resource of uranium, rare earths and scandium.

The company completed a successful drill program at the end of 2012.  Pele Mountain is currently updating its resource estimate on the project.  The Eco Ridge Mine is located in a proven mining camp which produced uranium and rare earths in the past.  The mineralogy and the geology are well understood.

The demand for rare earths is growing rapidly in the use of clean energy, smart phones and defense industries.  Uranium is also seeing a strong pick up in demand as China is building new reactors and Japan is planning to turn back on additional reactors possibly as early as this summer.  The Russian HEU agreement which supplied converted uranium from warheads is set to expire by the end of this year. 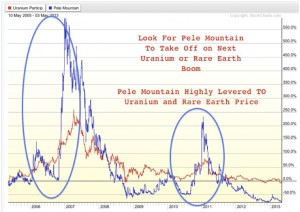 Having the uranium and the rare earths together in the same deposit at Eco Ridge is quite unique and has economic advantages.  The uranium can pay for most of the operating costs and it provides diversification to the investor.  Historically, Pele Mountain is highly levered to the price of uranium and rare earths.

Listen to a recent interview with Pele Mountain CEO Al Shefsky.  We discuss the current market environment and how Pele is moving full speed ahead.

Disclosure: Author/Interviewer Is long Pele Mountain and the company is a sponsor on my website.

Listen to other interviews with movers and shakers in the mining industry below...