I have been following a small cap graphite company for many years.  I invested in the company last year and have been highlighting Great Lakes Graphite (GLK.V) since last spring as a unique situation to play the clean energy market and the increased demand for lithium-ion batteries or what I call lithium-graphite batteries.  An important part of the graphite industry is the processing of the material at the microscopic level so that it can be ready for end users.  For months I have been waiting to hear news that the commissioning at the Great Lakes Graphite Matheson Micronization Facility has begun. 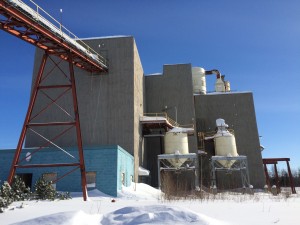 Today Great Lakes Graphite announced major progress in that they can now energize the Matheson Facility starting the equipment and preparing for commercial production.  All permits are now in hand to begin operations.  I now look forward to hearing news that Great Lakes Graphite is selling micronized graphite to end users especially in the clean energy battery sector.  The news today is significant for Great Lakes Graphite and could be a fundamental catalyst to drive the price to new all time highs.

Great Lakes Graphite CEO Paul Gorman said “From a Canadian perspective, we believe that these steps we are taking today are setting the stage for Canada to become a significant player in the supply chain for batteries for new applications such as electric vehicles and grid storage.”

The company believes the Matheson Micronization Facility has the potential to produce approximately 10,000 tonnes of high-carbon graphite concentrate per year.  The plant is adjacent to a major highway and rail.  Great Lakes is different than many graphite companies which are so far from cash flow.  I am excited to hear about the beginning of production and potential sales of micronized graphite in the near term. 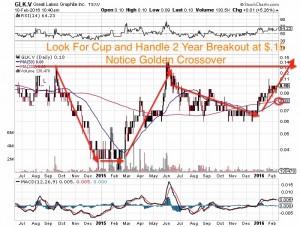 Great Lakes Graphite (GLK.V or GLKIF) is making a golden crossover of the 50 and 200 day moving average.  As they should announce production and sales of graphite in the near term I expect the company to be rerated higher and breakout of 2 year highs at $.15.

Disclosure: I own shares and warrants of Great Lakes Graphite and they were a website sponsor in 2015 so I would benefit if share price increases and I have a conflict of interest.  Make sure to do your own due diligence as there are many risks in a startup small cap situation like Great Lakes Graphite.