"The main purpose of the stock market is to make fools of as many men as possible."
Bernard Baruch

The majority of investors continue to chase the equity markets and U.S. dollar higher which both look very overbought.  Despite these high priced,  risky levels, gold, silver and platinum are testing strong areas of support and multi year lows.

The Venture is testing 2008 lows and near 2003 gold valuations of a ridiculous $400 an ounce.  Don't be fooled the majority of investors selling their resource shares for pennies on the dollar to chase the overbought equities, could be capitulating at exactly the wrong time.

The Venture is cheap priced at $400 au/oz.  This is a ten year low testing 2003 levels.  Gold is more than 50% higher than its pre credit crisis highs, the S&P 500 is now breaking through 2007 highs and the Venture is still discounted more than 70%.  The Venture appears historically mispriced and discounted indicating its buying time for long term value investors, not selling time. 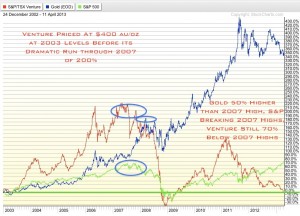 The only reason to sell is if the market or share price fully reflects the value of the underlying assets.  We saw that when some of our junior recommendations were bought out for huge premiums back in early 2011.  We may be seeing that euphoria in the banks and in the dollar right now, but we are definitely not seeing it in the miners which are trading at historic discounts to net asset value.

Investor sentiment in mining shares is extremely pessimistic, valuations are priced for a severe collapse, yet the fundamentals show completely opposite.  This is a buying opportunity for long term value investors.  This is definitely not a time to get caught up in the panic in the resource sector and follow the masses.

Be careful of being shaken out of your precious metals and mining shares.  In 2008-2011, we saw a similar scam in the U.S., where many walked away from their homes at the bottom going into foreclosure, destroying their credit and capitulating.  Four years later housing and the U.S. equity markets recovered.  To paraphrase Will Rogers, Bet on inflation as it is the only thing that goes up over the long term.

We could witness seeing something similar in housing back in 2008 with the junior miners in 2013.  Precious metals funds are seeing a record number of redemptions and the majority may be getting fooled as they may be selling out or near a bottom.  Selling based on negative sentiment, fear and emotions rather than fundamentals is akin to gambling.  We may be witnessing classic capitulation in the Venture and precious metals, as investors are capitulating just because prices are falling not because of negative news or fundamentals.  The recent gold and silver decline to new lows could be a fake out as the fundamentals for precious metals are stronger than ever.

Despite false reports of Cyprus being forced to sell its gold, the early release of the Fed Minutes, the bank downgrades and the bearish reports on gold and silver the price could hold support and reverse higher.  Gold and silver may fake many out as it breaks new lows only to reverse higher.  A reversal in precious metals prices could help turnaround the junior mining sector, which has still not recovered from the 2008 credit crisis like the housing market.

All the fundamentals for gold and silver to reverse higher are present.  The debt crisis continues to metastasize albeit out of the sight of the majority of investors in the United States.  Across Europe capital is getting nervous after witnessing major depositors in Cyprus lose close to 60% of their savings.  Short term, the majority of investors may be running to the U.S. dollar and U.S. large caps, but long term capital will step up to support the precious metals and mining sector.

Across the globe, governments are punishing savers and fighting deflation through confiscation of bank accounts, quantitative easing and negative interest rate policies.  Expect to see more of these easy money moves to increase the velocity of capital and boost investments especially as commodity prices are depressed.

Investors and banks around the world are sitting on a record cash position and eventually will not want to get caught.  Governments fighting deflation with negative interest rate policies and outright penalties for bank deposits will continue to force investors to look for alternatives to paper currency.

Fiat currencies are being actively debased by Central Banks who are quietly purchasing gold as the price declines.  I believe major capital is looking at strategic wealth in the earth assets which have a good chance of coming into production in politically stable jurisdictions.  Some of the worst performing gold equities these past two years were exposed to geopolitical risk andrising project costs.

I have always reminded my readers to look for miners with lower costs and operate in mining friendly jurisdictions.  Now it is time for investors to look for the quality projects and management teams which will build valued during this downturn.  Its may not be time to sell, but to rotate into more stable companies who have outperformed.

Eventually, we could see powerful moves into the Venture Index as investors seek capital gains over minuscule dividends which may not be able to beat inflation. The bank stocks may soon lose their steam as investors look for profits from growth or discovery rather than cost reduction and layoffs.

The Venture is oversold and historically undervalued compared to the Dow.  Savvy investors may be already looking at deeply discounted, quality assets with excellent management teams who can bring assest into production.  Shaky, momentum gamblers may be fooled into selling discount assets to chase overvalued vehicles.  Caveat venditor.

One company, I think could benefit from a declining Euro and rising gold price is Edgewater Exploration (EDW.V) that is one of the few gold mining companies gaining a lot of investor interest as it recently announced receipt of the Environmental approval by the Spanish Government. Permitted gold mines in first class mining jurisdictions are still highly sought by institutions and is demonstrated in Edgewater's ability to raise $5 million during a difficult market.

Edgewater's Corcoesto Gold Project is a million plus ounce resource at the bankable feasibility stage. It is relatively a high grade open pit mine. The Corcoesto Gold Deposit is located in a first world jurisdiction and is permitted. There is plenty of upside exploration but due to the tough financing market, funds are focussed on the Bankable Feasibility Study and advancing this asset toward production.

Most gold companies out there are early stage operations. Edgewater stands out with a tangible, permitted asset in a first class mining jurisdiction that is advancing towards Bankable Feasibility.

Disclosure: Author and Interviewer Owns Shares and Edgewater is a sponsor on my website.