Despite this four year historic bear market in gold and junior mining equities, Pershing Gold (PGLC) raised $11.5 million.  They are backed by some deep pocketed shareholders. Over 21 million shares of insider buying has occurred over the past six months.  Recently on April 10th, 2015 one of the directors acquired over 7.69 million shares.

Management is hitting impressive grades and the next few weeks could be exciting as they possibly announce a better stock exchange listing, new 43-101 Resource and a Preliminary Economic Assessment.    The CEO stated in the recent update,“…we anticipate increased ounces and higher grade in the updated resource estimate expected later this quarter.”

See my last interview with the CEO by clicking on the following link. 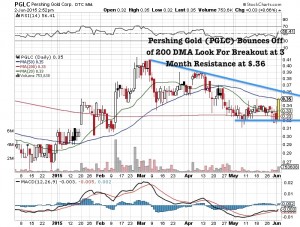 Pershing Gold (PGLC) is bouncing off the 200 Day Moving Average on high volume indicating that this is an area of support rather than resistance as it acted in the past.  I added to my position in Pershing Gold (PGLC) recently when they announced the start of their 2015 drilling program at Relief Canyon in Nevada.  The objective is to upgrade and grow the resource by testing near surface, high grade mineralization.    The drilling is planned to include approximately 75,000 feet (nearly 23,000 meters). The current cost estimate for this phase 1 drilling is approximately $3.5 million.  I hope to hear good news from this program and an updated resource sooner rather than later.
See the full news release put out about drilling recently by clicking here...
Disclosure: I own shares and Pershing is a website sponsor.  Be aware of the conflicts of interest.  I am not a financial adviser.