I have just returned from PDAC, the largest mining show in the world where I was invited to be a speaker.  This is my second year presenting at the show which is attended by over 30,000 people from all over the world.  It is a great honor and privilege to be selected by the highly prestigious PDAC committee.  Only two years ago, the sentiment was completely different.  In 2011, the mood was euphoric and may have marked the top in the junior mining sector.  This year the sentiment was negative and may be marking a capitulation and major bottom.

The theme this year at the conference was that explorers and developers are having a difficult time raising capital as investors chase the overbought Dow and Nasdaq which is hitting record levels and making multi-year breakouts.  Surprisingly, this is at a time when the gold and silver miners are hitting multi-year lows despite gold and silver holding the $1500 and $26 area.  I expect support for gold and silver to hold as the equity markets are overbought and our sectors look to rebound off of these oversold levels. 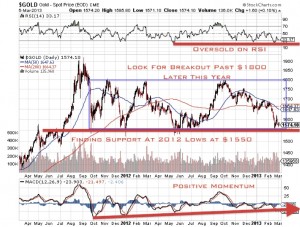 The recovery in the general equity market may soon increase confidence and risk on speculative behavior.  This should be good for our sectors in the miners and the metals as investors look to put their cash to work.  However, at the moment junior miners are concerned about financing.  This may eventually change.  I met major investors and fund managers that are looking to rotate into the undervalued junior miners hitting record oversold levels instead of continuing to buy the already overbought equity market.

Meanwhile, in this gloomy environment, many of the juniors may be bought out or merge.  We should start seeing an acceleration in merger and acquisition activity as companies seek alternative ways to cut costs and survive.  This process is quite healthy and plants the seeds for the junior market recovery.

Cash strapped companies should merge with competitors who have more capital.  Companies with cash are watching their treasuries very closely as even positive technical and geological developments have been ignored by this market.

This negative sentiment usually predicts a major bottom similar to the post Bre-X era and the 2008 crisis.  At the moment, the public markets are not supporting the juniors and soon private equity and cash rich miners may pick up fire-sale assets.  Conditions are ripe for a major industry consolidation or privatization.

Investors should review junior companies that are cash rich and may benefit from this time.  One of our featured companies, Miranda Gold (MAD.V) is well positioned to profit during these tough times.  Miranda is looking for quality assets in Nevada and Colombia that are trading at rock bottom prices and are strapped for capital.

The experienced management team with strong shareholder support was astute enough to raise C$5 million at the end of last year.  Having over $8 million in the bank puts Miranda in the driver's seat to take advantage of this discounted mining market.

Be prepared to see major transformations as financially sound mining  companies with cash gobble up the undervalued and financially strapped miners. 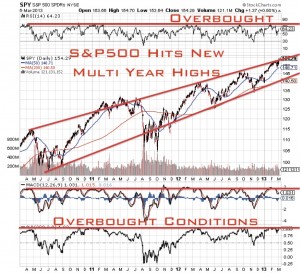 With the general equity markets hitting new 5 year highs, confidence and speculation should return to the junior market which historically has a positive correlation with equity prices.  This risk on behavior will eventually trickle down into the speculative mining sector as investors look for leverage in an inflationary market.

I was speaking with several private equity funds at PDAC who are looking to enter the sector as it is just horrendously oversold.  Some of these deep pocketed funds could privatize these assets, sit and eventually turn a profit.  The large miners are writing off over $50 billion on mines with increasingly high costs or ones that are located in questionable mining jurisdictions.

Right now, it may appear the majors are reluctant to buy junior assets.  In the past, they have made major acquisitions near the top of the cycles.  This time around the majors should have learned from their mistakes in the past and instead acquire assets as they are oversold.

Remember, the majority of investors are selling miners for ridiculous low valuations and chasing the equities into extremely overbought territory.  This may be precisely the time to go against the widespread negative sentiment and to continue to look for opportunities in the junior mining sector.

I believe that the Dow's move into record territory after a four year rally fueled by currency devaluation and record low interest rates may be a snare.  Trillions of dollars have been printed all over the world to produce one of the fastest stock and real estate rebounds.

This should eventually give investors more of a reason to be concerned about inflation rather than deflation.  The housing bubble crash and the near collapse of the global financial system required record government interventions and bailouts.

Many U.S. citizens walked away from their homes losing their credit and property to the banks who shouldn't have given them a mortgage in the first place.  Then these same banks wrote the properties off and sold it to hedge funds who purchased them for pennies on the dollar and are renting these properties out for an impressive cash flow.

This should be a learning lesson for us with regards to commodities and our undervalued mining equities.  Stick to the long term and don't get shaken out of core positions as the smart money will turn around and buy these junior assets graciously from you.  Trillions of dollars of Fed stimulus have forced investors from bonds and cash into equities.  The Fed is purchasing $85 billion a month to buy mortgages and treasuries.

In October of 2011, I called a major reversal rally which surprisingly has not yet helped the commodities and the miners.  I observe a parabolic up-move capitulation into equities as investors reluctantly buy the Dow at these overbought areas.  Instead, astute contrarian investors should look at the undervalued junior miners who should survive this downturn.

The bull market in the S&P500 is extended for many months.  Investors are beginning to put their money back into stock funds after sitting on record cash positions for many months.

Eventually, this should begin to affect the mining sector and commodities as an inflationary, risk on economy benefits the miners which provide leverage to rising commodity prices and increased demand.  A large part of this rally has been manipulated by the Fed's printing programs, which should eventually cause a rotation into our mining sectors.  The reality is Central Bankers are inflating our way out of this economic crisis and will eventually cause gold and silver to breakout into new highs possibly by the end of 2013.

Miranda Gold (MAD.V) has a strong and experienced geological team in Nevada and Colombia. Wisely sensing tough times ahead in the junior market, Miranda’s management raised capital back in the end of 2012.  Miranda now has about $8 million in the bank and is looking for high quality assets held by companies who are cash strapped.  This may be a great opportunity for Miranda shareholders.  Strategic acquisitions may build value during this painful downturn in the junior market.  While the majority are looking to chase the Dow into record territory, savvy investors are looking for overlooked and under-loved assets.

This may be one of the most oversold and undervalued junior markets in many years.  Stick with companies with experienced management, strong shareholders and cash like Miranda Gold.  Miranda Gold is a project generator.  They have 7 projects in joint venture, which allows them to conserve their treasury while others use their capital to explore the properties.

Despite a 13 year bull market in precious metals, this recent downturn has shaken out the incompetent companies operating in questionable jurisdictions.  However, there will be some companies with the experience and the financial backing to actually thrive and pick up valuable assets in the best jurisdictions at bargain basement prices.  Miranda Gold may be one of those companies.

They are exploring and evaluating projects in Nevada and Colombia.  These jurisdictions are favorable to financiers and investors.  Nevada is one of the safest jurisdictions and Miranda is focused on the Cortez Trend near the impressive Barrick Goldrush discovery which is growing every year.  Miranda has a significant discovery drill intercept that needs further exploration.

Colombia is one of the hottest areas as it is under explored and there have been three huge 10+million ounce discoveries in the past 10 years.  Miranda has signed a strategic alliance with major Agnico Eagle to explore Colombia.  This was a significant announcement that has heretofore been ignored by the market.  This financial backing by a major gold miner which was essentially a non dilutive financing allows Miranda to be more aggressive in its search for highly promising gold properties. 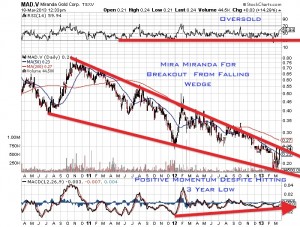 In conclusion, Mira Miranda (MAD.V) in this tough junior market.  This downturn may actually be a blessing for a cashed up experienced geological team which can build value during difficult times.

Author and Interviewer is a shareholder and Miranda is a sponsor of my free website and newsletter.