Uranium and Rare Earths Should Rebound On China Rally

We notice with interest that the popular media is ignoring the World Trade Organization case against China for restricting exports of critical materials which has a significant impact on the global economy.

These critical metals are not only crucial for your Ipads and smart-phones, but for our top secret, most advanced weaponry.  Looking for substitutes for rare earths has proven to be a poor return for investment.  For fifty years they have been trying to find alternatives only to find out that the chemical characteristics of rare earths are inimitable.

I have been a major proponent to advance domestic strategic mines in the U.S. and Canada.  Recently the U.S. Department of Defense partnered with one of our rare earth recommendations to advance studies.

This move may show investors that the our national security is dependent on domestic critical rare earth production.  I would not be surprised to see Canada make a similar move to support rare earth mining and development.

China recently during the quiet holiday season announced that they were tightening exports again on critical materials.   Rare earth export quotas for next year will drop again.  China claims that they are cutting back because of the weak global economy.

Nevertheless, stealthily China continues to announce infrastructure plans within China and has been stockpiling these critical materials for their own domestic demand.  For months, we have been predicting a rebound in China’s economy as iron ore prices began rising.

Now we read headlines that China’s exports are very strong even with a rising yuan.  Risk assets such as the miners and industrial metals should rally on this news.   More smart money from the investment community is realizing that China is far from a hard landing but they may be in the midst of a powerful recovery.

Exports have jumped to a seven month highs despite the debt issues in Europe and the United States.  This rebound in China may be the spark in the undervalued miners which have been in a downtrend for close to two years as economists predicted a Chinese hard landing.

Many investors have been concerned about the recent Fed minutes which indicated some sort of exit plan from quantitative easing.  These accommodative actions have boosted bonds, the housing and the financial markets with easy money.

We may be witnessing capital flowing to the growing economies such as China.  All these actions over the past few years by Central Banks could be starting an inflationary cycle which could boost the undervalued commodities such as uranium (URA) and industrial/strategic metals (REMX).

China's equity markets are up around 20% in the past six months far outpacing Europe and the United States equity markets.  Many do not realize yet that not only is China the world's biggest supplier, but their own economy has grown to a point where they may become the largest consumer of these materials as major industries continue to move their factories into China.

China continues to control the rare earth industry despite attempts from companies like Molycorp and Lynas to begin production.  Both companies have been plagued by delays and obstacles.  Mining and refining rare earths is not an easy ballgame as it requires advanced metallurgy.

For decades the world has been relying on cheap rare earths from China.  Nevertheless, this will be rapidly changing over the next few years.  The Chinese are especially short on the critical rare earths needed for permanent magnets, wind turbines, guided missiles and lighting as they are building their own facilities to manufacture these finished products.

Molycorp and Lynas should be able to supply a large amount of light rare earths after they work out their issues.  However, Lynas is still dealing with protestors in Malaysia and Molycorp is dealing with delays and rising costs to start production.  The disappointing performance in these two equities have hurt the entire sector.

In 2011 and 2012, we experienced a decrease in price of the entire industrial metal sector as QE2 expired and the US and European debt crisis intensified.  However, we may be at a turning point for the undervalued rare earth and uranium miners as China leads a rebound.

Large amounts of quantitative easing in the U.S. was announced in the second half of 2012.  The new Japanese Government is also devaluing the Yen to boost the Nikkei, while restarting nuclear plants.  China is rebounding quickly announcing infrastructure projects and starting construction on nuclear reactors.

China's decreasing rare earth exports combined with declining production and rapidly depleting heavy rare earth resources could cause an even greater supply shortfall in 2013.  China is consolidating the rare earth industry and cutting down on critical metal smuggling.  This will help the Chinese have greater control of their own domestic production.

This year should be quite active in both the critical heavy rare earth space and the uranium sector as Asia rebounds.  These rare elements are vital for our latest high tech devices and there are only a few viable companies that can get into production in a timely manner.  In the rare earth mining sector, geopolitical support and infrastructure is crucial.

Let's revisit Pele Mountain Resources (GEM.V or GOLDF) whom we have written about over the past year and has both uranium and the critical rare earths. 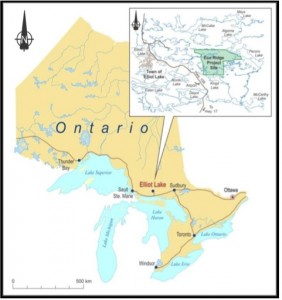 Pele owns a GEM in the only Canadian mining camp to have ever commercially produced rare earths and the two year downtrend is being broken to the upside as it moves above its 200 day moving average.  A major trend change could be occurring as uranium reverses higher. 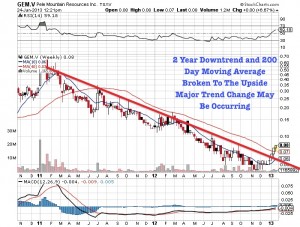 Their Eco Ridge Mine is located in Elliot Lake, a proven mining camp.  The local community has expressed great support for this project.  Read the entire mayor and city council’s letter by clicking here which states:

Elliot Lake is a proven mining camp and has produced more than 300 million pounds of uranium and heavy rare earths as a byproduct.  It may be the only place in North America where the heavy rare earths such as yttrium were historically once produced.

Unlike many of Pele's competitors, Elliot Lake has outstanding infrastructure with roads, rail, ports and power.  Pele's technical team is headed by Roger Payne who has spent 20 years working in Elliot Lake and is well respected by the local community as well as by his peers in the mining industry.

The company recently released an NI 43-101 Preliminary Economic Assessment with an NPV of over $1 billion and a before tax payback period of 18 months.  This is pretty impressive for a company with a market cap below $10 million.  Pele is looking for the opportunity to raise funds to take it through feasibility by working with end users and strategic partners for potential off take agreements in 2013.

The infrastructure at Elliot Lake is excellent and it is one of the great Canadian mining camps.  This has a major impact on potential low capital expenditures.  The geopolitical support from Elliot Lake is very strong which could help the company as they work diligently and  speedily to get Eco Ridge into production.

The world is racing for critical rare earth supplies and uranium resources.  Ontario is especially interested in a potential uranium deposit as nuclear power supplies over 50% of the electricity in the Province.  Pele Mountain's Eco Ridge mine at Elliot Lake may be one of the answers to Ontario in the years ahead as the Government looks for clean energy solutions to decrease carbon emissions.

In October of 2012, Pele Mountain released news that they were able to produce a rare earth concentrate and uranium yellow cake.  This was a major metallurgical milestone.

Pele Mountain may be one of the first rare earth candidates to get into production as the metallurgy and mineralogy is well known, has great infrastructure and very strong local support.

Here is the kicker.  A rising uranium price could be the economic advantage to propel Pele's Eco Ridge into the forefront of considerable candidates for industrial end users. 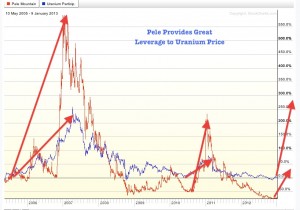 If the trend turns in both the rare earths and uranium, we expect Pele to outperform as it did in 2007 and 2010 on previous price rises in the underlying commodities.  Pele has a history of great price rises with rising uranium and rare earth prices.  History many not repeat but it tends to mimic.  Stay tuned.

See my recent interview with Al Shefsky CEO Of Pele Mountain Resources (GEM.V or GOLDF) below.

Disclosure: Author Owns Pele Mountain and Pele is a sponsor on my free website.  See my current list of sponsors by clicking here...

We are offering ideas for your consideration and education. We are not offering financial advice.  None of our content is provided to invite or encourage any person to make any kind of investment decision. We are not financial advisors.  We advise you to consult with a professional financial and investment advisor before relying on any content.  Please do your own due diligence!

I will be giving two presentations at The World Money Show in Orlando,FL. Learn more by clicking here...