Is The Critical Rare Earth Sector Making a Positive Turn?

I have just returned from the Vancouver Resource Investment Conference where I presented on the critical need for many different strategic metals.  The rare earth sector is beginning to attract interest as the U.S., Chinese and Japanese markets hit new 52 week highs after the changes in leadership in both countries.  The rare earth/strategic metals ETF (REMX) has crossed the 200 day for the first time since 2011 and I am monitoring for a bullish golden crossover. 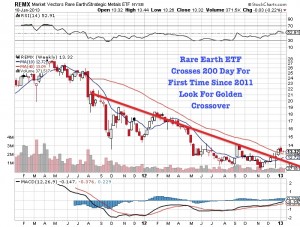 A rebound in high tech and the automobile industries could spark further interest for heavy rare earth supplies outside China which are critical to today’s latest cutting edge technologies. We are bullish on the monetary metals such as gold, silver and platinum but also believe investors should diversify into the strategic rare earths, tungsten, antimony and uranium which will grow increasingly important as society requires high tech and clean energy solutions.

The growth in the use of smart phones, tablets and clean energy will put more demand on heavy rare earth production which China currently dominates. Japan, Europe and the U.S. must develop their domestic assets and may need to accelerate investment as the economy rebounds.

Rare earth prices have been pulling back and consumers have been reluctant to buy due to fears of an economic slowdown.  However, that trend may be ending as investors realize that global stimulus by Central Banks may be sparking an inflationary rally.  Many world markets are hitting multi year highs including the U.S., China and Japan.  Sentiment is growing bullish for the rare earths as the ETF reverses above the 200 day moving average.

This may put pressure on industrial end users especially car manufacturers who are seeing increasing sales especially in Asia.  For instance, General Motors sells more cars in China now than in the United States.  New fuel efficient cars require dysprosium and there are no substitutes without major costs.

I expect increasing amount of end users to partner with junior rare earth miners who may be trading at significant undervaluations.  The rebound in this sector may be phenomenal as the heavy rare earths have the greatest short term supply risk of any metal. 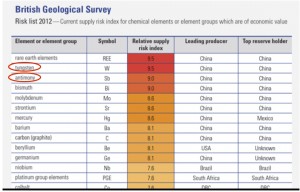 Over 14 months ago, we commented on Molycorp's CEO Mark Smith's testimony in front of the House Foreign Affairs Committee.  At that time we needed a true visionary to promote U.S. rare earth independence.

Instead, in my humble opinion, we got a little leaguer.  Molycorp should've differentiated between the heavy and light rare earths.  At that time we believed that Mark Smith's testimony omitted some important facts.  We asked the following question at that time.

"Where does Molycorp get its heavy rare earths? Smith claimed Molycorp possesses a complete suite of rare earths at their Mountain Pass property. Assays have shown that this mountain possesses predominately light rare earths with little or no heavies."

Not once were the members of the committee informed of the importance of the highly critical dysprosium, yttrium and terbium minerals, or the serious consequences China’s supply monopoly poses for American industry or U.S. national security.  It was an opportunity lost to educate the public.

At that time, when Molycorp had a much higher valuation, we recommended publicly they should've acquired the only domestic heavy rare earth asset, Ucore's Bokan Mountain which has the largest NI 43-101 compliant heavy rare earth asset.  Molycorp and Mr. Smith may have been in a different position today if they took an alternative path.

Instead, Molycorp (MCP) under Mr. Smith's direction purchased Neo Materials, a rare earth processor operating in China for over a billion dollars.  For a fraction of that value they could’ve acquired Ucore’s heavy rare earths.

At that time, we asked how is the U.S. going to be rare earth independent if Molycorp is going to China and Estonia for processing?  Molycorp shares have fallen close to 60% since the Neo Materials acquisition. 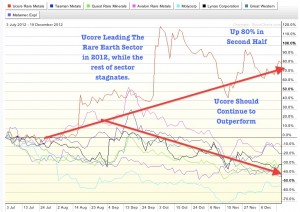 In fact, over the past six months, Ucore’s shares have rallied close to 80%, while Molycorp has fallen close to 54% and most of the other rare earths are in negative territory.  See chart below.

Fourteen months later after Mr. Smith's testimony when we posed these concerns about where Molycorp will obtain its heavy rare earths, CEO Mark Smith abruptly leaves the company.  Molycorp is dealing with a SEC investigation regarding its public disclosures and lawsuits related to engineering issues.

While Molycorp struggles with a transition of leadership, Ucore (UCU.V or UURAF) is moving full speed ahead.  Ucore just announced a partnership with the U.S. Department of Defense who may assist them in advancing the project and the pilot plant.

In addition, The State of Alaska is very supportive of rare earth development in the state and recently sponsored a rare earth conference where Ucore's Bokan Mountain was highlighted.

With this political support and low CAPEX, Ucore may be the first to produce heavy rare earth oxides such as dysprosium, terbium and yttrium for our national defense and domestic industries.

Ucore's recently published Preliminary Economic Assessment (PEA) demonstrates that Bokan Mountain has possibly the lowest Capex with one of highest rate of returns in the rare earth business.  Ucore has assembled some of the best mining engineers and chemists who all believe that Ucore's Bokan Mountain will be the answer for U.S. rare earth independence from mining to separation. 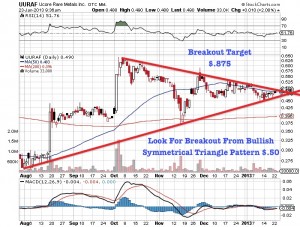 We hopefully anticipate a breakout from this four month triangle consolidation in early 2013.  We are seeing positive momentum and a bullish crossover on the MACD.  From the facts we stated above, we expect Ucore to continue to lead the rare earth rebound especially as they should be updating the markets with an updated resource from their world class heavy rare earth asset.

At the conference last year in Vancouver  I was on a panel with three other experts.  I was the only analyst who was bullish on Ucore due to several strategic factors such as geopolitical support, excellent management and great infrastructure.  In my premium service it was one of my only rare earth recommendations with an outperform.  Now looking back it seems that the markets are supporting my analysis and I continue to expect Ucore to be a leader in not only mining rare earths but in separating and supplying extremely valuable rare earth oxides to U.S. industries.

Listen to an archived interview with CEO Jim Mckenzie discuss the innovations Ucore has developed last year and why they could be first for U.S. rare earth independence.

Disclosure: Author is long Ucore and Ucore is a sponsor on http://goldstocktrades.com/blog

We are not a registered investment advisor and information and analysis provided is for entertainment, informational and educational purposes only.  Check with a registered financial advisor before making investment decisions.   Some companies may not be registered in the United States with the SEC.   From time to time,  Gold Stock Trades and its directors, officers, employees or members of their families, as well as persons interviewed for articles on the site, may have a long or short position in securities mentioned and may make purchases and/or sales of those securities in the open market or otherwise.  Please see our list of current sponsors and featured companies for any potential conflicts of interest.

I will be giving two presentations at The World Money Show in Orlando,FL. Learn more by clicking here...