China Markets Breaking Out Into New Highs May Boost Commodities

For months, we have been highlighting to our readers that China’s economy is beginning to pick up which could positively influence commodity prices.  The fears of a slowdown were overblown. 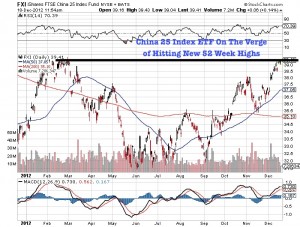 China's stock markets (FXI) have been rallying since early September because speculation is rising that the newly chosen Communist Party may boost the economy.  The China 25 index fund (FXI) is approaching a major 52 week high breakout.

This may be impacting iron ore and industrial metal prices which have moved higher as Chinese industries may be beginning to aggressively stockpile ahead of 2013. 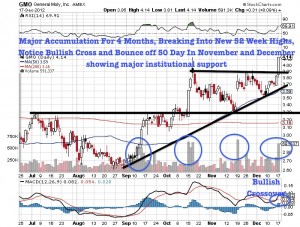 One of our molybdenum North American assets General Moly (GMO) is hitting new 52 week highs as moly is critical in the production of high strength and lightweight steel which the Chinese need for infrastructure projects.

Uranium miners (URA) are rebounding as well gapping above the 50 day moving average as China starts construction on new reactors and as Japan announces a pro-nuclear party, whose goal is to use additional stimulus to weaken the Yen.

There have been pundits fearing a China slowdown but the charts are showing otherwise.  China may be rapidly acquiring natural resources during the quiet end of the year market to secure comm0dity supply  in expectation of a major state funded  stimulus.  Attention must be paid to this renewed interest in ferro alloy, rare earth (REMX) and uranium miners (URA) during a quiet Year End market dominated by Fiscal Cliff news which has diverted the focus away from these undervalued sectors which are rebounding.

China is investing in infrastructure projects and has been stimulating the economy in 2012 and may increase that in 2012.  China now dominates the steel making industry and accounts for more than 60% of world demand.  They have also become a net importer of many industrial metals for their own domestic economy.

The media tends to sell doom and gloom about the global economy and especially the oversold commodity sector (DBC).  They highlight that the major commodity producers have already begun to cut production.  This may be indicating to our contrarian antennae that the bottom has been reached in these commodities as mines shutdown putting pressure on available supply.  India, the third largest exporter of iron ore has cut back considerably this past year, which may cause a near term deficit.

The global printing of money started by an open ended QE3 and culminating with unemployment targets by the Fed is beginning to cause a flight into risk on assets as investors are realizing paper currencies are losing value and are looking into real undervalued industrial metal assets such as molybdenum, platinum (PTM), uranium (URA), copper (JJC) and nickel many of which is a fraction of the value it was before the credit crisis.

This may be benefitting some of our undervalued industrial miners such as General Moly with world class assets.

We originally highlighted this company on our blog in early 2009, long before the Hanlong Group from China took a major interest below $2.  Click here to see our original posting…  Now it is hitting new 52 week highs in a weak resource market.

General Moly just announced that they can begin construction on its world class, high grade Mt. Hope molybdenum mine in mining friendly Nevada.  Mt. Hope is considered one of the largest and highest grade moly mines in the world.

Bob Pennington, Chief Operating Officer of General Moly, said "After receiving funding from POS-Minerals Corporation, our joint venture partner on the Mt. Hope Project, and obtaining authorization from the BLM on reclamation bonding, we will now move beyond our ongoing cultural clearance program and initiate light construction activities including early well field development and clearing and grubbing as we prepare for heavy construction in the spring."

We are witnessing a major high volume 52 week high breakout on the positive news.  Many major institutions such as Posco, Hanlong, Arcelor Mittal and Sojitz have done their due diligence in this asset and are confident investing at much higher prices taking a long term approach. This provides General Moly with strong financial backers from Korea and China who understand that demand over time will continue to rise and supplies of high grade moly mines are rare.

Check out my interview with Bruce Hansen CEO of General Moly from earlier in the year.