Ready For The New Bull Market in The Junior Mining Sector?

Right now, the investment community regards commodities and junior miners as the ignored red headed stepchild as they have  been in a downtrend for more than seven years.  The TSX Venture Exchange is hitting all time lows as this bear market becomes the most devastating in history.

Whenever you mention gold and silver stocks, investors relate to the wipe out in many stocks which includes not just the penny junior but the leaders like Barrick (ABX), Newmont (NEM), Yamana (AUY) and Goldcorp (GG).  Instead the talk on the street is the high flying tech sector such as Apple (AAPL), Facebook (FB) and Google (GOOG).  Its reaching bubble territory.  Apple alone is worth four times the entire mining sector put together.  The divergence between tech stocks and mining stocks has once again reached dot com proportions.  History may not repeat itself but it tends to be similar.

What we are seeing right now with a high priced tech sector and the extremely discounted miners is comparable to the major cycle low at the turn of the millennium.  Right before Y2K the dot com's were reaching a bubble while the miners were completely ignored.  We then witnessed a major expansion in the mineral sector for seven years from 2000-2008 while equities underperformed followed by a seven year contraction from 2008-2015 where the tech stocks have outperformed the commodities from 2008-2015.

It is possible we are once again at or near the turning point or bottom in the junior mining sector and near a top in the tech sector.  Only a handful of the tech high flyers have pushed the equities higher.  Already the transports and utilities have been under-performing.  It may be wise to hedge gains made in the S&P500 and Nasdaq and increase accumulation of precious metals and the junior miners near historic lows.  Remember the greatest gains are made in the early stage of a bull market.  Early stages of bull markets come after the previous bear market capitulation. 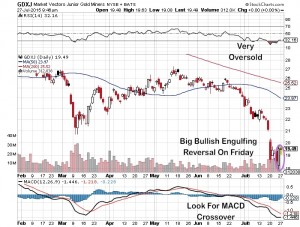 July 24, 2015 may have marked an interim low on the GDXJ as it experienced a classic bullish engulfing reversal pattern on high volume following a major capitulation.   Since that low, support has come into the GDXJ. If its the beginning of the rally, follow through should occur by the end of this week ending August 7th.  I am still cautious until I see some additional buying as the precious metals rallies have been fake outs in the past.  In order to confirm the interim low I would like to see some increased buying before the end of this week.

Please stay tuned to my premium service which will be monitoring technical developments and which recently highlighted these three stocks last Tuesday that are bouncing higher on major volume. 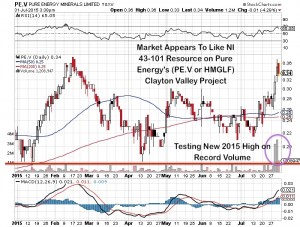 Lithium is the one bright area of the resource space as the price has been rising and on Tesla (TSLA) building a gigafactory in Nevada.  Pure Energy has 8000 acres around the only producing lithium mine in North America.  Its a brine deposit which is the lowest cost type of lithium to process and its only three hour drive from the gigafactory.

Please see full press release on the new resource estimate by clicking on the following link.

Also check out the article entitled, "Buffett, Musk to spark a lithium boom" published in the USA Today.

2)I am a shareholder of Fission (FCUUF) and believe the merger with Denison (DNN) could benefit the entire Athabasca Basin.  M&A is the name of the game in uranium.  Notice the recent merger with Energy Fuels (UUUU) and Uranerz and the proposed merger of Fission with Denison and another merger of Uranium Resources (URRE) and Anatolia.  The combined larger entities could attract strategic/institutional investors which could open the capital markets to improved exploration and development budgets.  In this bear market companies need to consolidate in order to cut costs and attract major institutional interest.

Now Denison with Fission will have the best portfolio of high grade advanced uranium assets in the Basin plus free cash flow from Denison's toll milling agreements and management fees with Uranium Participation Corp (URPTF).   Fission shareholder's will have a major US listing on the NYSE MKT with Denison and a better chance of attracting more funds who have market cap and listing requirements.

See the news release of the definitive arrangement between Denison and Fission:

Despite all this merger chatter, Fission is hitting and growing PLS by leaps and bounds with just outstanding results.
See the news release which shows seven new high grade holes:

Also keep a close eye on Fission 3 (FISOF) and Canex (CSC.V) who have just begun drilling at Clearwater which is adjacent to PLS and is by far one of the most prospective targets of Fission 3's immense portfolio in the Basin.  This is high risk but the gains can be huge as we witnessed with discoveries in the Basin in the past.  Fission's famous award winning geologist Ross McElroy believes Clearwater may be one of the most prospective targets in Fission 3's portfolio.

See the full news release from Fission 3 and Canex by clicking on the following link:

3)Pershing Gold (PGLC) recently rolled back its shares and uplisted to the Nasdaq.  Quite often after such moves some of the penny stock players sell their shares.  It appears there was a high volume reversal just a few days ago.  It may be coming off the bottom.  It has one of the most advanced mining projects with a permitted mill in Pershing County Nevada next to some of the big boys such as Coeur (CDE).  They have been hitting amazing high grades and the CEO is former Franco Nevada.  He has made major deals with the largest mining companies in the world in the past.
Listen to my last interview with Pershing's CEO Steve Alfers by clicking on the following link: