Miranda has recently announced a significant alliance with Agnico Eagle, a $7.5 billion mining giant, to explore for gold in Colombia, one of the best countries to work in South America. Miranda already has a working relationship with Agnico in Nevada and Ester Dome in Alaska.

According to CEO Ken Cunningham, this deal will put over $2 million dollars into the Miranda treasury over two years, strengthening the companies financial position at a time when it is challenging for exploration companies to raise capital. In addition, Agnico will be picking up 70% of exploration costs and overhead in Colombia.

Currently, the major miners are looking to invest in Colombia. Mining is a depleting business and the big boys need large and long living mines in politically friendly jurisdictions.

We have witnessed the rise of resource nationalism and violence in Argentina, Bolivia, Mexico and Peru. Some of the majors such as Barrick and Pan American are putting holds on giant projects due to rising costs.

Colombia is transforming itself into a mining friendly jurisdiction and possibly the top place to work in South America. For this reason, Miranda has been working diligently in Colombia for about two and a half years and have developed an impressive exploration database.

Agnico Eagle who is focusing on growth is able to jump start their Colombian exploration by joining forces with Miranda who has experienced exploration geologists and technical personnel already there.

The major miners such as Agnico use their in house exploration personnel around operative mines to attempt to replenish reserves. The majors look to Miranda to provide high powered, boots on the ground and grassroots exploration team for Agnico in Colombia.

Miranda has a myriad of catalysts in the pipeline in the second half of 2012 at their Nevada, Colombian and Alaskan Projects. Drilling and assaying are currently underway. It must be remembered that they are only one significant drill hole away from a major discovery on any one of their multiple projects located in mining friendly Alaska, Nevada and Colombia.

During these difficult and volatile time in the marketplace, project generators like Miranda can preserve their treasury and at the same time provide shareholders with a chance of participating in a major discovery. 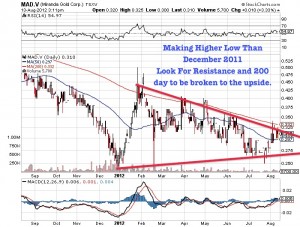