Powerful Risk On Rally Benefitting Gold and Silver Explorers In 2012

Gold’s accelerated move to $1900 in the summer of 2011 past overhead resistance indicated the market was waiting for an inflationary QE3.  The market got a surprise as Bernanke waited until 2012.  This was no surprise for my readers and precious metals declined lower in the second half depicting a surprise move with gaps lower.

Luckily we were able to call the top in silver in April 2011 and gold in September 2011 as it reached overbought conditions, locking in partial profits.  On April 28, 2011 I wrote, “Remember that I am recommending partial profits if your winnings enable you to play with the house’s money and you are still holding silver from our August  2010 Buy Signal at $18. Other readers who have not been able to build a position can wait for the inevitable pullback as additional buying opportunities.”  A few days later in May we saw a volatile decline in silver of close to 40%.

Likewise in August of 2011, I became concerned of a correction in gold as it reached overbought territory.  On August 5, 2011 I wrote, “Although the technical picture for precious metals is improving, there will be periods of volatility as the global markets shake. A consolidation in gold would be normal and healthy.”  A few weeks later gold topped and corrected for the rest of 2011.

Mining equities and precious metals sold off in the third and fourth quarter of 2011. When such unexpected short term pullbacks occur we must monitor the rebound.  Negative news which causes a temporary decline with a powerful recovery indicates strength and resilience.

The precious metals and natural resource market appears to be finding its footing and now may return to close some of those downside gaps in 2012 .  The recent selling panic in gold and silver bullion has abated and reversals are beginning to occur.  We are on the verge of a breakout at $35 in silver, $4 copper and $1800 gold could be significant.  Mining stocks are also making dramatic moves higher especially uranium and rare earths.

One should never get caught up with a selling panic like the end of 2011 especially in gold and silver bullion which has had significant up moves over the past 18 months and past ten decades.  Recently gold’s accelerated move to $1900 and silver’s to $50 was overdue for a restorative pullback.

It must be emphasized acting in a knee jerk fashion following the herd and panic by selling at discounted levels for pennies on the dollar must be avoided.  Some analysts were caught up with the decline irrationally calling the end to a 10 year bull trend.  How foolish!

Gold and silver are finding support and the end of 2011 was not a time to call the end of a trend, but to realize that gold and silver was providing a discounted buying opportunity.   The mining shares have never been so oversold in this entire decade long run as it was in the end of 2011.  The recent volatile selloff created an extreme oversold condition where reversals occur.  Although the recent rise has been on volume, a break above the 200 day  on increased volume for the miners and silver could indicate that the downside gaps made in 2011 may be closed sooner rather than later and potentially very quickly.

Gold Stock Trades has weathered several corrections in miners, gold and silver over the past 10 years and each time we have maintained a strong hand.

It is normal and necessary to have corrections.  Quality mining equities and precious metals begin new bases and reach compelling valuations that long term, contrarian investors can use to their benefit by adding to positions or initiating purchases in favorite stocks or sectors which one has not participated in yet.

One must not be discouraged or give up during volatile selloffs like 2008 or 2010 or 2011 and run to cash.  One must use short term volatility to one’s advantage and go against the latest fad.  We buy winter coats in the summer.

We must stay focussed on the long term trends and realize that the mining stocks have been beaten down in 2011 to dramatically oversold levels.  It is time to pick up resource stocks especially in uranium, rare earths and gold/silver explorers selling at great discounts.

Despite recent carnage silver and the industrial metals are exhibiting relative strength to gold in 2012.  The long term trend for silver is intact and it appears to have found support at its long term trend around $30.  The momentum indicators have bounced off oversold levels.  Silver has all the right criteria for a fast move to test all time highs.

It is no surprise why the uptrend in commodities is intact.  The West is monetizing debt and printing dollars at a record pace to alleviate the debt crisis.  Risk on has been the name of the game in 2012. 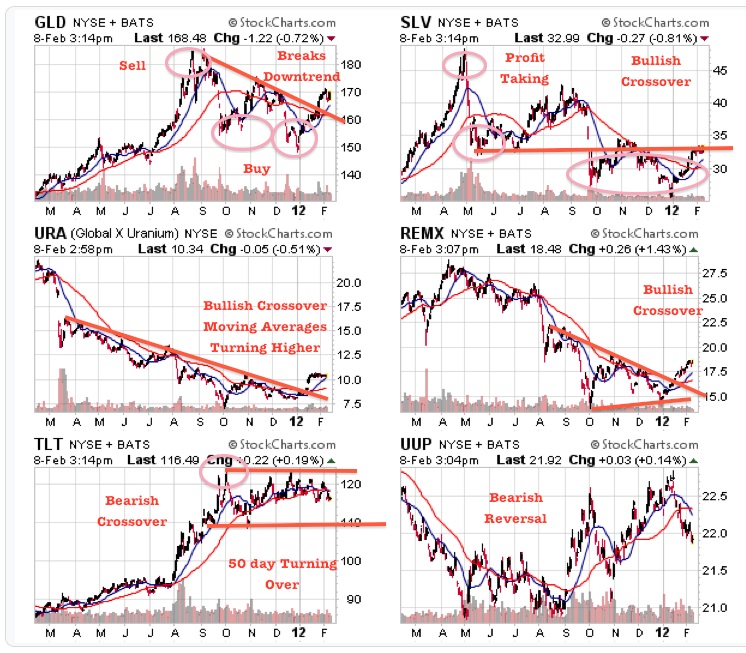 Those on the sidelines in cash and treasuries, playing risk off are in fact playing a risky game as inflation appears to be the flavor of the day.  Look for technical breakouts in gold, silver, copper, uranium and rare earths as they all appear to be reversing higher as the moving averages transition upward.  The risk off trade in Treasuries and the U.S. dollar appears to be losing momentum and dangerously teetering on a decline.  Pay attention to the ball not the windup as we may be witnessing a change up.   To get scouting reports, specific targets and up to the minute updates on the natural resource market click here.

One company we are closely following is Miranda Gold (MAD.V or MRDDF).  Learn more about this prospect generator by clicking here...

They are engaged in nine joint ventures some of which are with the big boys such as Agnico Eagle at Ester Dome near Fairbanks, Alaska, which has just announced encouraging drilling indications. Some of which are right next to the big boys in the world famous Cortez Trend in Nevada, where Barrick is continuing to announce world class bonanza discoveries.