We are in the midst of a powerful rebound in our select uranium miners such as Uranerz (URZ).  The charts indicate an explosive 220% rebound since October lows.  For months we sent out reports that Uranerz will outperform as they are well funded and have already initiated construction on their Nichols Ranch In Situ Uranium Project, which should be producing uranium by the end of the year.  They also have agreements with Cameco and Exelon, two major nuclear players.  In fact Uranerz is leading the sector over the past three months regaining its 200 day moving average and rallying over 225% from October lows. 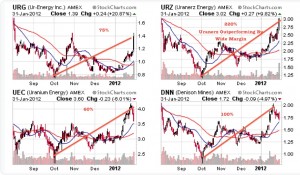 See the map of their enviable land position between Uranium One and Cameco by clicking here.

I wrote to my readers back in October, “In relative performance to the S&P Uranium stocks returned to 2009 levels, extremely oversold and demonstrating negative divergences for several months.  Keep your hands on the nuclear plow.  If one has not invested in this sector, this is a chance to buy wholesale.  The coming months will give geometric gains as safe, modern, clean and affordable nuclear reactors come online.  Stay steadfast to reap the coming rewards.”

Check out the recent interview with Dennis Higgs, Executive Chairman of Uranerz, discussing the uranium market and updating us on current developments in the Powder River Basin in Wyoming.  For Dennis Higgs bio as well as the other experienced managers and directors click here...

Gold Stock Trades will not regale you with the growing presence of nuclear facilities throughout the world despite the German and Japanese negative stance.  It is well known that reactors are going to come online in increasing numbers and that uranium will be in rising demand.  In fact, several reactors are being built right here in the United States as well as all over the world.

The U.S. Nuclear Regulatory Commission is scheduled to approve Southern Co.’s application for the first construction permit to build modern nuclear reactors in more than 30 years.  Southern is planning to build two new generational reactors and the NRC is considering a license to build additional newly designed reactors in South Carolina.     Nuclear power accounts for 20% of all electricity being produced in the United States and is expanding with the construction of new safer, efficient and cleaner nuclear reactors.  This is being done all over the world.

The once in a millennium earthquake and tsunami in Japan has triggered a knee jerk panic driven reaction from politicians especially in Germany and Japan.  However, the U.S. Nuclear Regulatory Committee released a study nearly a year after Fukushima stating “Public health consequences from severe accidents are very small...successful implementation of existing mitigation measures can prevent reactor core damage or delay or reduce offsite releases of radioactive material.”  The study, called the State-of-the-Art Reactor Consequence Analyses (SOARCA), looked at worst case scenario situations and its impact on health.  This means the U.S. is going full speed ahead on nuclear while Germany and Japan continue with skyrocketing electricity costs.

It is to be noted that four of the giant Japanese nuclear builders are aiming their sights to countries all over the world especially the emerging nations, which are constantly seeking inexpensive and clean electrical energy.  They are responding to this global need by sending teams of experts to sell the building of a new generation of reactors.

Japan wants to sell nuclear reactors abroad to boost their exports.  The companies that are participating are Hitachi and Mitsubishi Heavy Industries among others.  The Japanese claim that emerging nations can learn from the Japanese Nuclear Experience.    The Giants do have a vocal opposition at home who are criticizing this outreach by calling it hypocrisy and the setting up of double standards.

Japan is impaled on the horns of a nuclear quandary, weighing their thirst for exports against their own domestic naysayers.  Money talks.  The Japanese Nuclear Industry posted an annual profit of over $3 billion dollars which made a welcome addition to their balance of exports.

They have gone so far as to offer interested emerging nations not only the building know how, but they are offering them loans to assist them in this pursuit.  It’s almost an offer that these young nations will find hard to resist in their search for efficient and affordable, clean electricity.

Moreover, there are reports that Germany and Switzerland are fast coming to the awareness that the costs of locking up their nuclear plants will cost large amounts of capital.  Siemens published a report that it would cost Germany more than $2 trillion dollars to wean off nuclear by 2030 causing major deficits.  Imagine they are placing their trust in foreign providers.  It is going from wholesale to retail at great costs to their economies.  Capital will flow to countries that make sane, rational decisions with regard to nuclear.

Recently, Russia and the United States have taken a page from this Japanese imperative.  Formerly at loggerheads during The Cold War, they are now uniting cordially to ensure that nuclear fuel is available for the growing number of new generation of nuclear reactors.

We have remained steadfast in highlighting the importance on our select list of uranium miners right here in the United States.  This means jobs and new ancillary industries rising to accommodate the increasing uranium output.  We are speaking about new cranes, highways and even cities.  We are talking about a U.S. nuclear revival.

How does all this relate to our subscribers?  It is evident that nuclear power in not only here to stay but will proliferate as world demand keeps on growing.  Our select uranium stocks have been rebounded considerably after being left for dead only weeks ago.  Our subscribers are having their patience rewarded.

The German and the Japanese liberals will reconsider their knee jerk political reaction as their policies weaken their once proud credit rating and economic standing.