Uranium miners that are close to production in Wyoming are gaining a lot of enthusiastic interest from investors over the past few weeks.   Some of the miners out of Wyoming have made huge percentage gains such as Uranerz (URZ), UR Energy (URG), Cameco (CCJ) and Uranium One (UUU:TSX) as more mines are expected to receive permits to begin operation. There are thirteen mines being developed in Wyoming.  Wyoming produces the largest amount of domestic uranium with Cameco’s (CCJ) Smith Ranch Mine which is also the largest U.S. facility. 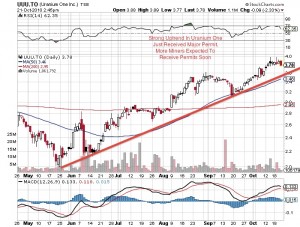 There have been recent developments with the recent issuance of the Moore Ranch project to Uranium One which is partially owned by the Russian Government.  Just recently Uranium One’s Moore Ranch received its NRC license, which is the first uranium mine to be permitted in several years and was a major milestone for the industry.  Unfortunately for them due to Uranium One being largely owned by the Russian government, congressional members wrote a letter that shows their concern of U.S. uranium possibly supplying Iran. America is one of the largest consumers of uranium and a lot of the supply of uranium comes from nuclear warheads from Russia.  More than 90% of uranium used in this country is imported.  However, that program with Russia is coming to an end by the end of 2013 and the U.S. will need to find alternate supplies.  Investors realizing this crunch are buying these miners with great enthusiasm.  Right now the new mines from Wyoming are key to the future of power generation in the United States.  Investors are seeing this concern about future local uranium supply.  A concern is that many foreign countries are controlling U.S. uranium which is vital to this countries future power generation.  These small miners will be acquired at premiums or be subject to hostile takeovers in 2011 as they move closer to production.  Cameco (CCJ) recently had an off take agreement with China which will also put pressure on supply over the next few years.  I expect more agreements with miners to be announced as foreign investors scramble for future supply.

I believe these assets provide dollar diversification in low risk mining jurisdictions.  Uranium could move parabolic as more power plants are built and there is not enough uranium available.

Wyoming is a friendly mining jurisdiction and many of these projects are in-situ mining, which means they have to dispose of water.  Groundwater contamination is the greatest concern for local residents.  Investors must research which projects have local support and permits for water disposal as the Environmental Protection Agency could hold a project up for this reason.

Although many commodities have reached new highs the uranium stocks are just beginning its major move.  The growth in nuclear and the supply demand constraints will drive uranium prices very high.  These uranium miners who will progress into production  The U.S. has over 20% of its power comes from nuclear power plants.  There has also been bilateral political support to increase nuclear energy to reduce carbon emissions and is an essential component of the clean energy push.  Expect to hear more news of acquisitions as miners make progress and move closer to production.