The global debt crisis and the war on deflation by the Federal Reserve is causing more producers to find ways to invest their cash.  This low interest rate environment which may continue for some time will force producers whom are sitting on large cash positions to acquire more reserves.  Mergers and acquisitions in the mining sector have increased over this past year due to a lack of major discoveries as well as supply and demand changes in emerging economies.

We have seen a trend of investments from Asia to purchase stakes in mining companies.  In 2009 the Chinese Investment Corporation, a state owned company, took large ownership positions in Teck Cominco and Penn West Energy Trust. Recently in June, China National Nuclear signed a contract with Cameco to supply 23 million pounds of uranium.  Hanlong Investments took a large stake in General Moly, one of the leading North American molybdenum developers.  Korea Electric Power signed a deal with Denison Mines another uranium developer. Sojitz bought a 25% interest in the Taseko’s Gibraltar Copper Mine. Then recently we saw BHP Billiton trying to make a deal with Potash Corp. and Kinross, a large producer buying Redback, an exploration company.  This trend should continue through 2011.

For producers it is more efficient to acquire explorers to replace their reserves rather than rely on their own exploration team.  I am focussing on the junior mining sector whom are close to production rather than the large producers as they will receive large premiums on their assets.

Following the mining sector on a daily basis the evidence of keen interest to acquire resources is apparent.  There is a search for real assets and natural resources.  Foreign countries are looking for natural resources to diversify their holdings and supply their emerging economies. Large mining producers are searching for replaceable reserves of gold, silver and industrial metals.  As the U.S. attempts to reflate their economy at all costs, precious metals and natural resource assets should receive a premium. 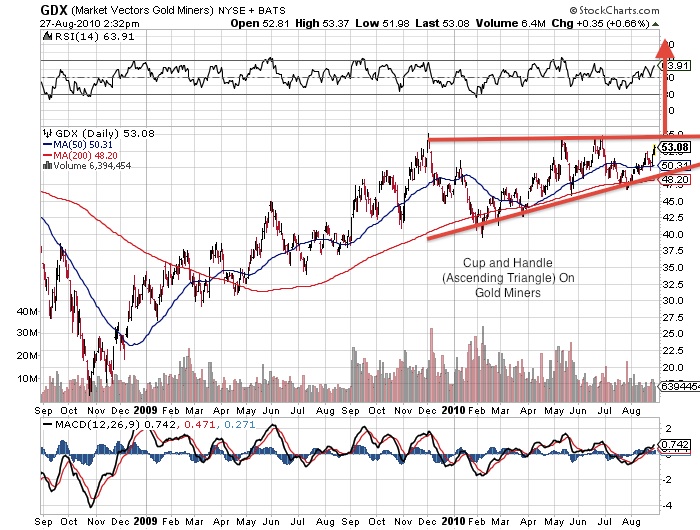 The Gold Miners are close to a major cup and handle breakout.  It also appears to have set up an ascending triangle pattern.  A breakout from this pattern could lead a major move into new high territory.

The strong trend in gold miners is signaling that interest rates will stay low as the Federal Reserve makes every attempt to reflate the economy.  Precious metals prices should stay high which would make producing mining companies highly profitable.