In 1883, a historic cataclysm of 10 days shook the world and vaporized Krakatoa, an island between Java and Sumatra. An umbrella of ash rose 50 miles high and sent sonic reverberations seven times around the world. Deaths numbered 120,000. Scientists of that time were awed by the magnitude of nature’s forces that were being unleashed. They speculated that one day ways would be found to harness this energy. Even the Bible concurred with the physicists, that all inert matter contained particles of energy that if harnessed could provide inexpensive and abundant energy to replace the coal, steam, and oil that fueled the industrial revolution of that era. Now, if Faraday and Boyle could return to 2010 they could witness the fulfillment of their most visionary dreams with the advent of The Nuclear Age.

International demand for uranium is rising. Knowledgeable investors who made a killing when uranium reached $136 a pound in June 2007 are once again in the accumulation mode. The Russians, Koreans, and particularly the Chinese are investing in joint ventures all over the world to gain control of future supply.

In fact, our contract with Russia to dismantle nuclear warheads expires in 2013, not far away. This will further exacerbate the supply and demand deficit. China is likely to purchase offtake agreements with uranium miners who don't have any.

It's important to find the miners who are in the driver's seat. This is the miners' market to catch a solid bid at higher levels. Certain miners who are close to production with uranium that's not yet purchased are set up to reap the benefits of this hot sector. Recently, uranium hit a 24-month high of $61 a pound. Typically, when uranium begins to make its upward move it does so with atomic force, giving large profits to the lucky holders.

It's interesting to note that only eight mines in the world yield more than 50% of global production. Moreover, in reality, there's not a lack of uranium deposits, but there is a lack of assets that possess production potential. Already in the United States there are a 104 plants with more coming. China has 11 plants and is constructing another 28 reactors. This doesn't include the facilities existing in France, Germany, Japan, Iran, among others. Today’s nuclear plants are sophisticated, safe, and efficient, far removed from the fossils of yesteryear.

As gold got overbought in October, and I saw a coming rally in the US dollar, I focused on the junior uranium miners in Wyoming as many miners were expected to receive licenses. Some of the miners out of Wyoming have made huge percentage gains -- such as Uranerz (URZ), Cameco (CCJ), and Uranium One (SXRZF.PK) -- as mines have begun to receive permits to begin operation. Earlier, Uranium One received its NRC license on its Moore Ranch Project and recently Uranerz received its draft license on its Nichols Ranch project. 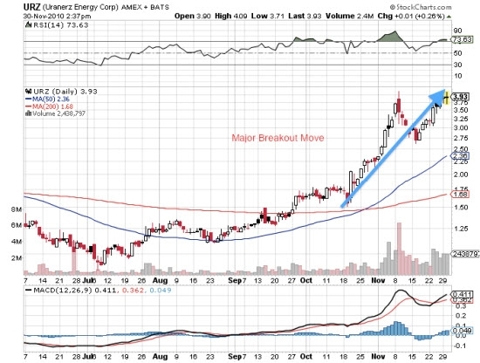 Uranerz has doubled in the past month. Once miners receive their licenses their shares should be rerated by Wall Street. Wyoming produces the largest amount of domestic uranium with Cameco’s Smith Ranch Mine, which is also the largest US facility. Not all of these mines will move to production and only a select few have no local opposition and other key permits.