Look at uranium versus oil over the fourth quarter.  Uranium is making higher lows on strong volume while oil continues to decline.  It is clear that uranium is showing great relative strength technically, but what could be some of the positive fundamentals driving this outperformance. 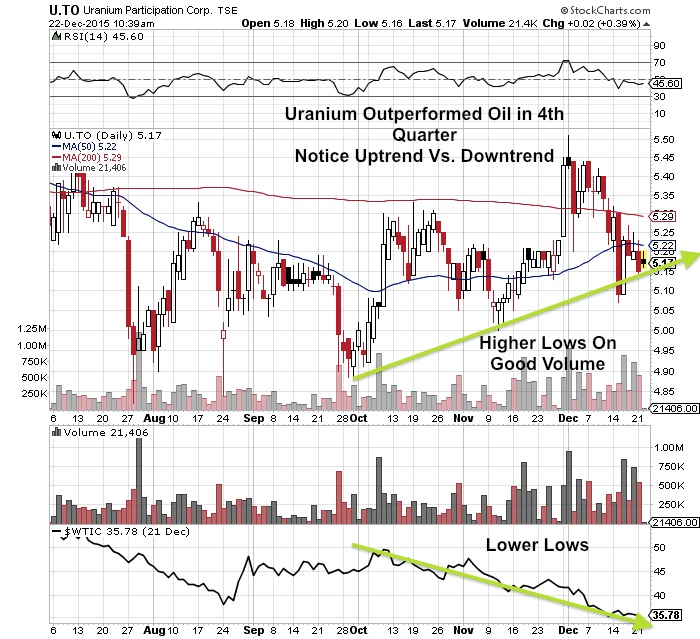 Emerging economies such as India and China can no longer rely on dirty fossil fuels.  Recent news out of Paris on Climate Change could be putting pressure on long term energy planners looking to decrease their carbon output by securing long term off-take supply contracts with uranium miners (URA).
Notice recent news that came out of the beaten down uranium sector.  After the Fission Uranium (FCU.TO or FCUUF) merger with Denison (DNN) fell apart, Fission announced a signedbinding letter of intent to sell $82 million or 19.9% of the company at a huge premium to the market to CGN Mining.  CGN is listed on the Hong Kong Exchange and the controlling shareholder is China Uranium Development Company, a division of China General Nuclear Power.
Earlier this year in April I wrote in this article that "China may be on the hunt for acquisitions to secure long term uranium supply in addition to the Indians.  It will be hard to find as many of the marginal producers have already shuttered mines and the low uranium spot price has made it challenging to finance development projects...Focus on Fission Uranium (FCU.TO or FCUUF) which is continuing to grow and expand the Patterson Lake Discovery, a once in a generation high grade discovery which has already over 110+ million pounds of uranium.  As soon as it breaks out and continues its upward trend I expect either Cameco, Rio or the Chinese look to chase it."
Dev Randhawa, Chairman and CEO, of Fission Uranium, commented on the recent deal with CGN Mining,
"This is an historic moment for Canada's uranium industry. It is the first time a Chinese company has invested directly in a Canadian uranium company. We are thrilled that CGN Mining has chosen to invest in Fission, PLS and the Triple R deposit. CGN Mining's understanding of the uranium business is superb and we are excited at the opportunity to work with them. CGN Mining's knowledge and expertise will be invaluable as we progress PLS and add to shareholder value."
Mr. Xing Jianhua, Chief Financial Officer of CGN Mining, said,
"CGN Mining and Fission Uranium have worked hard together to forge this partnership. Both companies have a strong drive to cooperate and achieve the synergy which will result in sustained, mutual benefit."
See the full news release on the Fission Deal by clicking here...

Ross McElroy, President, COO, and Chief Geologist for Fission, commented in the recent news release,
"Following extensive evaluation and highly targeted staking, Fission 3.0 has further enhanced its already-strong exploration portfolio in the Athabasca Basin region. Our award-winning technical team is also making good progress with early-stage exploration work on a number of the company's high-priority projects as we explore for near-surface uranium mineralization in the world's leading high-grade uranium district."

Its important to pay attention to what may be one of their top targets Clearwater West which is Joint Ventured with Canex Energy (CSC.V).  The property lies adjacent and to the south of PLS Discovery. 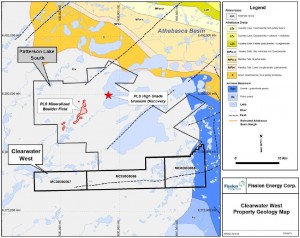 Canex recently drilled three holes and confirmed “geological features which makes the area highly prospective for hosting high-grade uranium mineralization.”
In conclusion, I expect investment interest in nuclear to recover quickly as emerging economies look to secure offtake agreements and take equity positions in Canadian junior miners.  Remember the Fukushima incident in March of 2011 could have been one of the biggest black swans in TSX Venture history.  However, news out of Fission may mark a bottom in the junior uranium sector and possibly the TSX Venture hovering around historic lows around the 500 mark.
Disclosure: I own Fission, Fission 3 and Canex.  Fission 3 and Canex are website sponsors. Please be aware that mineral exploration is very risky.  Make sure to read the risk factors on public filings.  Do your own due diligence as I have a conflict of interest as I would benefit if share price goes higher.  This is not investment advice.