Rare earths are a critical part of the Chinese economy and now they are taking a major step in looking to advance rare earth supplies outside of China especially in North America.  The Chinese have seen the exponential increase in demand of these magnet materials especially in clean energy and want to benefit over the next generation by expanding their rare earth processing capabilities worldwide.   For many years I alerted my readers to the possibility that even the Chinese may look to invest in rare earths outside of China.

Over one month ago, I highlighted a deal between a giant Chinese rare earth company and a junior Canadian company which shook up the entire rare earth landscape.   Pele Mountain Resources (GEM.V or GOLDF) soared on record volume following the announcement.  I believe as investors become more aware of the significance of this agreement and as the deal gets closer to being finalized the stock should be revalued higher.

What do Pele Mountain and Shanghai Mining want to do?  They want to process high grade rare earth monazite at Elliot Lake.  Why Elliot Lake?  Elliot Lake produced millions of pounds of uranium over the decades and was once known as the uranium capital of the world.  It is the only place in Canada where rare earths were commercially produced back in the 1980's.  Elliot Lake has a history of dealing with radioactive material safely and securely which is crucial for permitting and processing monazite.  The infrastructure and regulatory support for permitting monazite processing in Elliot Lake may be one of the best in North America.

This permitting and regulatory advantage at Elliot Lake may be the reason why Shanghai Mining, a huge Chinese rare earth technology company is interested in the junior Pele Mountain.

Big news just crossed the wire that shows that all levels of the Canadian Government support this agreement between Pele Mountain and Shanghai Mining to build a rare earth processing facility in Elliot Lake.  Pele Mountain Resources in a recent news release expressed their appreciation to Federal, Provincial and City Government officials for supporting the Memorandum of Understanding, which will bring a global leader in rare earth processing to Elliot Lake. 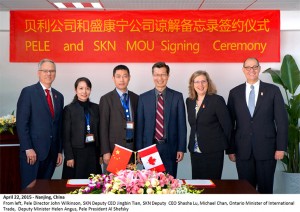 Pele's management just returned from China where Shanghai Mining and Pele Mountain had an official signing ceremony with Ontario's Minister of International Trade who stated, "Ontario is very keen about this agreement. Having rare earth processing in Elliot Lake, Ontario, Canada makes sense."

Al Shefsky, President and CEO of Pele stated, "We deeply appreciate the support and encouragement we are receiving from all levels of Government for our MOU with SKN. We are especially grateful to the Government of Ontario for Minister Chan's visits with SKN & Shenghe in China this year and his ongoing efforts in support of our proposed development of integrated rare earth processing operations in Elliot Lake." 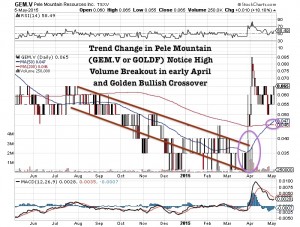 Pele Mountain (GEM.V or GOLDF) broke out on record volume in early April and since then we have witnessed an important bullish golden crossover.  I expect that the downtrend may be ending and we could see a sustained move higher.

Disclosure: I own shares, warrants and options in Pele Mountain as I am a shareholder and consultant.  I would benefit if the share price increases.  Please do your own due diligence.