One junior gold miner that I have been very bullish on for many months is outperforming the GDXJ benchmark by a wide margin.  Integra Gold (ICG.V or ICGQF) is up over 60% in 2015 alone outperforming the GDXJ by 50 percentage points.   This is incredible relative strength and confirms my prediction that this is one of the premier junior gold mining companies on the entire exchange.

They are on the verge of a major 52 Week High breakout as they announce very impressive drill results.  These results are significant as they confirm extensions of the Triangle Deposit and show that all zones remain open laterally and at depth. The results are exceptional and I expect more to come as there are eight drills turning on the property with five drills in the Triangle Zone.  Look at these high grade results driving the share price to test 52 week highs. 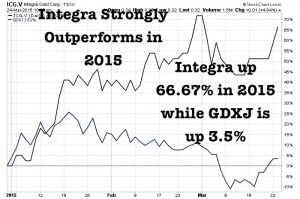 Integra recently announced an updated resource in early February which showed a major increase in the indicated category.  Integra Gold (ICG.V or ICGQF) owns 100% of the Lamaque South Gold Project in Val-d’Or, Quebec and is currently drilling 50k meters with eight diamond drills.

If you know of a more active junior in a stable jurisdiction tell me.  I can’t find another company as exciting as Integra.  Integra recently made a bullish golden crossover of the 50 and 200 day moving average and is hitting new six month highs past $.325 as investors see the significant increase in resource at the highest grade target and the exploration upside on the project.

Integra is a unique junior as they own 100% of a project which has a low cap-ex and high grade returns in an area with a ton of M&A activity.  Management has experience operating gold mines in Val D’or and advancing this project into production.  It is a dream team of Quebec miners with decades of experience mining in Val D’or.

It appears that the technical team has shown wider zones at depth in the Triangle Zone increasing the overall grade and size of the resource.  What is significant about this is that historically the most productive and profitable ore in the neighboring mines were in the lower zones. 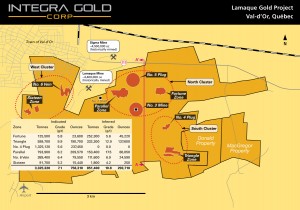 This year Integra appears to be extending a number of holes at depths below 900m with up to eight core rigs drilling.  I believe the majors are beginning to recognize the growth potential of this high grade gold project in mining friendly Quebec as long as the major institutional funds.

Integra recently appointed Charles Oliver to the board.  Charles was the lead portfolio manager for Sprott and has decades of experience evaluating mining investments.  He may be an excellent liaison for Integra to gain even further recognition among his network of financiers as they move toward production.

In addition, Integra just added Petra Decher from Franco Nevada to the board and Jacques Simoneau who was the exploration manager for Goldcorp at the Eleonore Mine in Quebec which grew to over 7 million ounces of gold.

Integra is making a bullish golden crossover of the 50 and 200 day and breaking new six month highs made in September of 2014.  It could go into new 52 week highs at $.40 once drill results spread through the investment community. 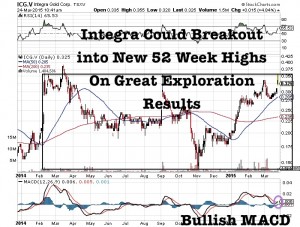 I just interviewed Integra Chairman George Salamis who started his career in Val D’or with Placer Dome.  He explains his history working in Quebec and the current technical team assembled to build value and take this asset to the next level.  Listen to the interview by clicking here... or viewing below.

Disclosure: I am a shareholder of Integra and the company is a website sponsor.  Please do your own due diligence!