I know things are probably hectic around this time of the year.  However, the deadline to weed out the companies who have not delivered in 2014 and take tax losses for the year is coming to a close.

The last day to do this for my Canadian subscribers was Wednesday December 24th, 2014.  My American subscribers have until the end of the day to sell stocks for a tax-loss.

Focus on the best junior mining resource companies and add to winners by placing stink bids 15-20% below the market.  You may buy some shares at a discount over the next few trading days.  I list my favorites in my premium service.

If some of my subscribers took profits after doubles and triples in some of our winners such as Western Lithium, Niocorp, and Canamex then one can take some losses to offset those gains.  Investors who want to get to back in to those positions have to wait 31 days. 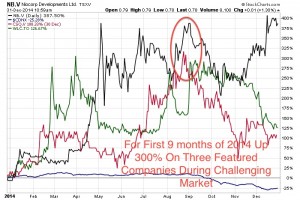 In a historic bear market, 9 out of 10 stocks fail.  As the old adage states, "When they raid the house, they get them all."  However, I have been blessed in that most of our featured companies are hanging in there and two of them more than doubled and one almost quadrupled in one of the worst years in resource history.  This indicates to me that our system of research and due diligence is improving and should show outsized gains once the 200 day moving average begins sloping higher.

Its my opinion to rotate into what I believe are exciting and dynamic junior miners which I listed in my premium service.   I focus my newsletter on the outperformers and companies who constantly deliver on their set out goals.

The major miners such as Barrick, Newmont, Coeur, Hecla and Agnico Eagle are constantly on the lookout for quality projects which could improve their balance sheets with good grades, infrastructure and favorable geopolitics.

Since the downturn in gold in 2011, the exploration industry has been suffering with a lack of capital.  The pace of development has significantly slowed down.  Eventually, this could be the catalyst for a supply shortfall in gold and possibly gaps higher in price in 2015.

Mcewen Mining Chairman Rob Mcewen who built mining giant Goldcorp was just quoted on Kitco News that he believes gold could reach $2000 USD an ounce by the end of next year as there will be a major shortfall in supply on the horizon.  Mcewen said, "...The next time gold runs, there's not as much gold available... there's going to be a gap in production that could be three to five years long before it's properly addressed."

The recent decline in oil could reduce the gold producers cash costs especially in the United States.  Newmont and Barrick may increase focus on acquiring high quality projects in Nevada where the most profitable gold mines in the world can be found.  The major miners could surprise in the new year as they may show better profits and eventually boost dividends and free cash flow as they reduce exploration budgets. 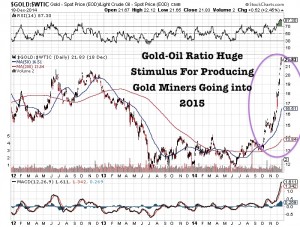 This could be a great time for a cash rich junior to make a new discovery in a favorable jurisdiction in Nevada.  The cost of drilling is at record lows and this is actually a great time to be exploring at the possible beginning stages of a bull market.

In conclusion, tax loss selling is coming to a conclusion.  I expect news flow to increase starting next Monday.  Keep a close eye on the first few trading days in January as it is a barometer of the year to come.

Disclosure: I own all companies mentioned and they are website sponsors.  Please do your own due diligence.

P.S. I will be speaking at the 20th Annual Vancouver Resource Conference on January 19th, 2015 at 1PM.  The topic will be "Picking The Winners in the
Junior Mining Sector Despite The Worst Bear Market in History".
Learn more about the event and register by clicking on the following link:
http://cambridgehouse.com/event/33/20th-anniversary-vancouver-resource-investment-conference-2015
P.P.S. I was recently interviewed on the radio by Mining Industry Veteran Jay Taylor on my favorite resource stocks and technical analysis signals to help know when to get in and out of various stocks. See the interview by clicking here...