Governments around the world especially in the emerging economies are now beginning to worry about inflation and currency devaluation.  Turkey and India have taken emergency measures to increase rates and the U.S. is tapering as there are growing concerns about significant declines in their respective fiat currencies.  Even the Russians and Chinese are concerned.  The ruble and yuan are hitting new lows.  Paper currencies may be on the verge of failing.  Eventually, a new currency backed by gold could be established to restore trust. 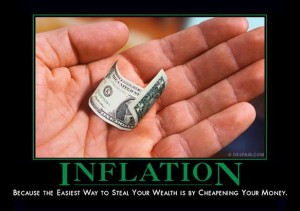 Globally, governments have been debasing the currencies of their economies since the 2008 crash to stimulate financial markets.  The U.S. has been the most active at quantitative easing and have artificially spiked the equity and housing market.  We may begin to see governments trying to take emergency measures to reverse these hyper-inflationary moves through rate hikes but it may be too little, too late.

Interest rates may soon drastically rise as the U.S. dollar, Ruble, Yuan, Euro and Yen turn lower.  Look for nations to play hardball for tangible natural resource assets.  Don't be surprised to see a rise of resource nationalism where governments expropriate mines from private companies.  Governments can devalue fiat currency and manipulate financial markets over the short term but it can’t fight the long term upward trend of metals and commodities.

Remember what Yogi Berra said, “A nickel isn’t worth a dime anymore.”  The dollar, dimes and nickels have lost more than three quarters of its purchasing power in the past 30 years.  I remain steadfast in my approach to accumulate the best mining assets in stable jurisdictions.

Precious metals and particularly industrial metals continue to maintain its value over the long term.  Despite the slowdown in the East, growth over the long term will continue its upward rise.  I continue to look for undervalued commodities trading at multi-year lows that could have a few catalysts to drive the price higher.  For instance, I have liked uranium and rare earths for years as they are cheap compared to technology stocks and real estate.

Many of the junior resource miners are incredibly discounted especially when considering long term supply demand fundamentals and the risk of inflation.  Some commodities such as copper, uranium and nickel are way off their highs from a few years ago.  Most investors chase the commodities when they are rising or breaking out into new highs.  Don’t forget them now when they are on sale and are being almost completely ignored by the investment community.  Eventually, the masses will return to our sector and the winners will be the early ones like us.

Our junior resource miners are some of the top in their field and many have outperformed despite the recent downturn.  Don’t think that just because some are significantly cheaper doesn’t mean that they are not worth owning anymore.  The opposite may be the case, these miners may be more valuable and better bargains then in the past.  When the upturn comes look for the neglected stocks to wake up.  For instance, International Tower Hill Mines (THM) released a Feasibility Study last year in a bad market which the analysts gave poor reviews and targets of $.10.  The stock went down to $.30 but is now over a $1 as I expected.  As soon as the gold price started moving back up Tower Hill led the market.   Each year we lose value in our paper currencies.  Our mining assets should grow in value over the long term especially when the commodity prices turn higher which I expect they will be very soon.

Some of us who have invested in commodities and mining stocks remember past frenzies and price spikes as shortfalls loomed. In the late 1990's, it was palladium that went 5-6 times its original breakout point.  Remember when the industrial metals, oil and uranium spiked in 2007 based on explosive China demand?  Or when rare earths soared after China cut off supply to China?  Or when silver ran from $18 to $50 in 2010 following QE2?

In late January I told all my subscribers that its time to watch nickel as Indonesia instituted an export ban cutting off possibly a quarter of global supply.  Now six weeks later the nickel price powers through the critical $7 mark and Bloomberg writes an article entitled "Nickel Heads for Bull Market..."  Its better to be early, then late.  Why is nickel so important and breaking out past $7? 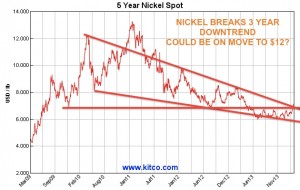 Nickel is used to make stainless steel which is used in a wide variety of industrial and consumer applications.  As populations expand and urbanize more stainless steel is required.  As emerging economies grow they need more nickel for alloys used in pipelines, jet engines and nuclear power plants.  More nuclear plants, pipelines and skyscrapers are being built now than ever before.

Demand for nickel is increasing every year.  Indonesia supplies over a quarter of worldwide nickel.  Over six weeks ago I wrote, "The announcement that Indonesia has banned exports could have a dramatic effect on supply and cause a reversal in the nickel price which is still more than fifty percent below its all time highs." 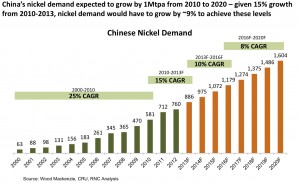 To put this move from Indonesia to ban exports into perspective think of all the OPEC Gulf states ceasing oil production or Chile cutting copper exports.  China may be growing nervous.  Close to 75% of China's nickel pig iron supply comes from Indonesia.

Other countries such as Japan, Australia, Canada and the U.S. could be significantly impacted by this rise in resource nationalism in Indonesia.  The nickel price should start moving higher very soon.  There are very few sources of high grade nickel outside of Indonesia,  The Philippines is another option but they are also considering an export ban.

Even though there is still a large amount of nickel in stockpile, experts are predicting that inventories could run out by mid 2015.  Enter center stage Royal Nickel's (RNX.TO or RNKLF) Dumont Nickel Project in mining friendly Quebec, which could begin construction by the end of this year and start production in 2016. 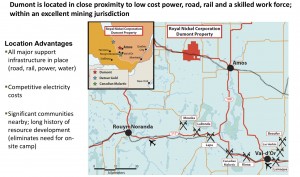 Royal Nickel has the management team that knows nickel possibly better than any other junior as they worked for Inco the major nickel miner which was bought out by Vale back in 2007 for a great return for shareholders. 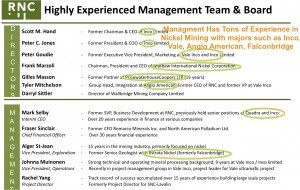 The rise of resource nationalism in Indonesia is nothing new.  Nations may have already been planning for the export ban this month by stockpiling.  Nevertheless, smart investors should position themselves in top quality assets like Royal Nickel's Dumont Project as inventories begin to run down low in the second half of this year. 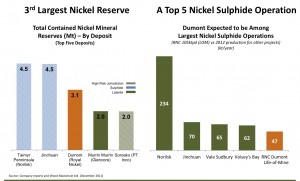 There are very few high quality nickel projects ready to be built like Royal Nickel's Dumont Project.  Before the previous run up in 2006-07 there were plenty of undeveloped projects.  This is not the case today.

Royal Nickel owns one of the only mines I know of with a construction ready project, experienced management that specializes in nickel and a strong treasury of close to $15 million.  Nickel is one of the few commodities that China needs desperately as they have very little from their own production. 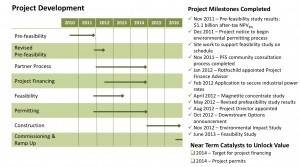 Royal Nickel's Dumont Project is one of the largest nickel deposits in the world and probably the largest, most advanced and best quality nickel project in control of a junior miner.  With a market cap of less than $40 million, $15 million in cash, priced significantly below book value and a $1 billion NPV top tier nickel project, Royal Nickel is significantly undervalued and could be a ten-bagger.

Look at the Board Of Directors and Management sheet and you can see all the top level experience formerly from Inco which rewarded shareholders with a buyout from Vale in the last up cycle.  Now may be the time to prepare for the next bull market cycle in the industrial metals with Royal Nickel as the Indonesian Export Ban sparks a supply shortfall going into the second half of this year. 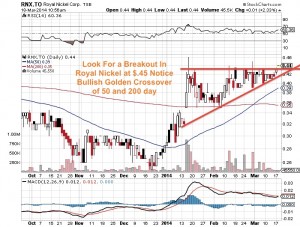 Listen to my recent interview discussing the nickel market and current events with Mark Selby Interim CEO of Royal Nickel and formerly of Inco by clicking here...

Disclosure: Author is long Royal Nickel and company is a website sponsor.