We are almost at the third anniversary of the once in a millennium Fukushima Disaster.  Lessons have been learned from the accident.  The nuclear sector is once again rebounding, getting up off the mat and making a late round comeback.  The uranium miners are just beginning to breakout forecasting that the uranium price may be on the verge of a reversal off of 8 year lows. 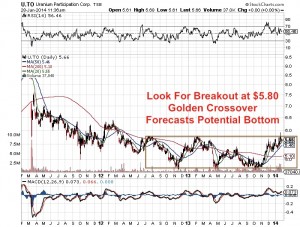 Cameco (CCJ) and Uranium Participation Corp. (U.TO), the two major bellwethers for the sector may be just beginning to make a move.  Cameco just hit a new two year high. 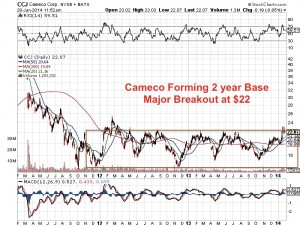 Smaller players I follow such as Uranerz (URZ), Laramide (LAM.TO), Lakeland (LK.V) and Pele Mountain (GEM.V) have made major moves in the new year making phenomenal gains on high volume outperforming the larger bellwethers.  From a technical perspective the charts look excellent for our featured uranium companies. 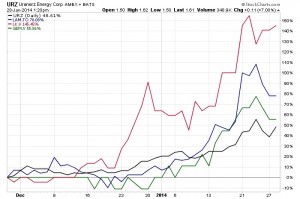 The junior uranium mining sector may be forecasting a turnaround in the spot uranium price for the following reasons.

1)Investment demand is returning as Uranium Participation Corp (U.TO) raised $50 million to buy spot uranium.  The uranium price is still 50% off pre Fukushima prices and 75% below the 2007 top.

2)Japan has plans to restart more than 15 reactors.  Some may turn back on before the end of 2014.

3)Some of the older uranium mines operated by Rio and Areva in Africa and Australia have been shut down or mothballed due to low uranium prices.  Cameco's Cigar Lake in the Athabasca Basin continues to be delayed as well.  Even one mine shut down or mothballed could cause a supply shortfall, now we are witnessing several.  This could mean 20-25% of future supply could be at risk.

4)The agreement between Russia and the U.S. to recycle uranium from Soviet Nuclear Warheads expired at the end of last year.  This removes an additional 24 million pounds of supply.

5)A major legal backlash in Germany from the nuclear utilities has ruled that the nuclear moratorium was unconstitutional.

6)Numerous banks are turning bullish on uranium including JP Morgan, Bank of America, TD Securities and Scotiabank with upgrades and higher targets as nuclear utilities especially from emerging economies are expected to secure supply.

With the recent closing of the $20 million State of Wyoming loan, keep a close eye on Uranerz (URZ) which has all the permits and financing to begin production at its Nichols Ranch In Situ Uranium Mine in the Powder River Basin. The company has attractive off take contracts with some of the largest U.S. utilities and is undervalued compared to its peers.  It must be considered immediately as it finds support along its 200 day moving average. 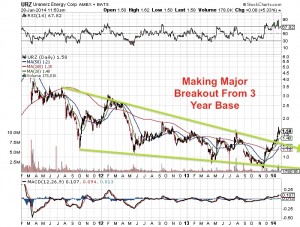 As it moves into production in the 1st quarter of 2014, I believe the shares could be rerated higher as it begins to generate revenues and attract value investors. With a low uranium spot price Uranerz has the advantage of having off take contracts at higher prices. This future income may distinguish Uranerz from its peers in the U.S. uranium mining sector in 2014.

The uranium sector is undergoing a major process of being cut off from cheap Russian uranium which came from nuclear warheads. The U.S. is the largest consumer of uranium with 104 nuclear plants and has relied on imported uranium from Russia over the past twenty years. However, that has come to an end in 2013.

For many years I have been preparing my readers for this time when the market would go into a major supply deficit. Unfortunately, the wildcard that was dealt to my readers many whom are experienced uranium investors was the Fukushima disaster caused by a once in a generation earthquake. Despite that event, I predicted at that time that new nuclear reactors will continue to be built despite others who claimed the death of the nuclear sector.

Now close to three years after Fukushima there are more nuclear reactors being built than before the tragedy. Despite following this sector for many years, new investors have the opportunity to get in at ground floor prices. The major decline in the resource sector combined with Fukushima allows investors to buy producers at valuations that would be given to a start up explorers.

The Wyoming uranium producers such as URZ should be invested in as they could fill the uranium shortfall from the end of the Russian agreement. Uranerz, Uranium One and Cameco all operate in the Powder River Basin. Cameco is opening and plans to start at additional mine sites.

I expect to see huge production growth in the Powder River Basin over the next decade and Uranerz could significantly benefit as it has possibly the best exploration package in the strategic Powder River Basin. Wyoming could really benefit from this uranium renaissance as it is the largest uranium producing state in the nation. Also many places in Wyoming are amenable to in situ uranium operations which is more economic than conventional mining. 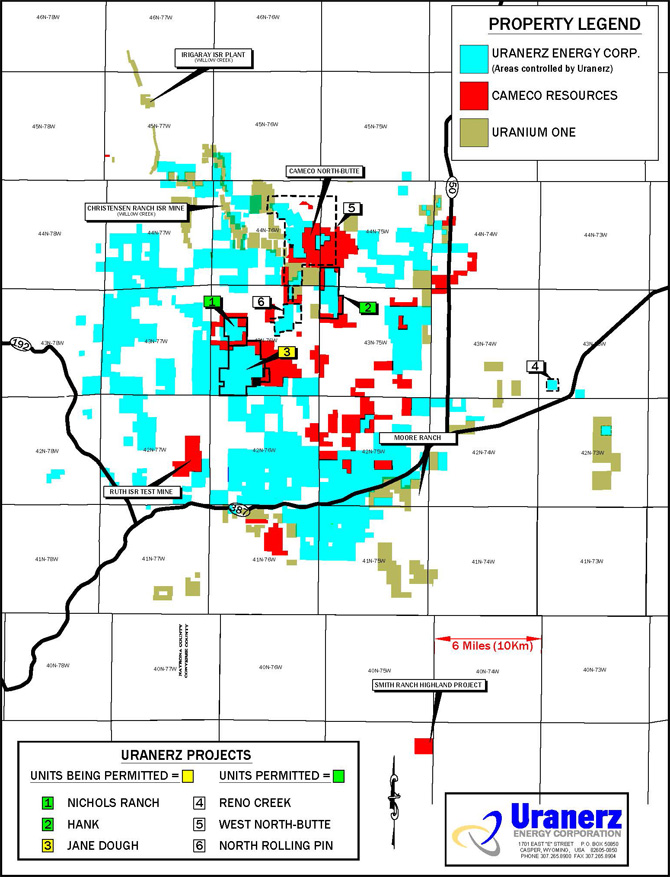 Companies like Uranerz can survive with prices below $40 unlike many conventional miners who have already cut back on production. The time to get into these situations is before the uranium price spikes higher which it may already have started doing since early November.

A bullish golden crossover of the 50 and 200 day moving average in the uranium price may be signaling a turnaround. Japan is expected to turn more reactors on in 2014. Many of the planned mines have been mothballed and existing production has been suspended on projects from Australia to Canada to Kazakhstan. Rio Tinto is having problems at its Rossing and Ranger mines. One mine shutting down can put significant upward pressure on the uranium price which is very thinly traded.

Listen to my recent interview with URZ Chairman Dennis Higgs below.

Disclosure: Author/Interviewer owns URZ and the company is a sponsor on my website.