The recent low price in uranium which hit 8 year lows in 2013 may actually be the catalyst to look for higher grade and more economic uranium deposits in the Athabasca Basin in mining friendly Saskatchewan.  Higher cost mines are being shut down or delayed, however new uranium discoveries are receiving a lot of attention especially in the Athabasca Basin which is the highest grade uranium mining district in the world. 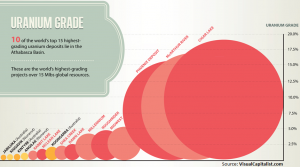 This low price in uranium is why Cameco, Rio Tinto and Denison have been buying junior uranium explorers in the Athabasca Basin trading at bargains. These assets are high grade meaning potentially lower production costs in a stable jurisdiction.  Smart money knows nuclear power is here to stay as there are more reactors operating and under construction now post-Fukushima than from before the once in a millennium natural disaster.

Even after Fukushima, the Athabasca Basin has been the one bright light in a resource sector covered with darkness.  Right after Fukushima, Cameco and Rio Tinto, both with billions of dollars of market cap went into a bidding war over Hathor.  Rio won with a bid of $642 million.  Eventually, Denison bought out Fission for their J-Zone asset next door to Roughrider making themselves a target for either Cameco or Rio.

Now, Fission's new spin out is buying Alpha for $180 million for the new Patterson Lake South Discovery.  What does all this M&A activity in Athabasca uranium miners mean in a bear market in the resource sector?   Smart money is telling us that the Athabasca Basin represents one of the great areas to make wealth in discovery of uranium.

Look at the Athabasca Basin bellwethers such as Cameco, Rio and Areva whose share price has moved significantly higher to pay top dollar for the best discoveries in the Basin. 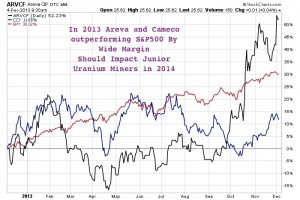 The Athabasca Basin is attracting capital that is looking for 10-20 fold increases. The key to invest in early stage exploration is to find the right people. Look for the best personnel who have proven track records of success in this area with this commodity.
Jody Dahrouge was instrumental in the discovery of Fission's J-Zone Discovery which was bought by Denison and the Patterson Lake Properties where Fission and Alpha have made a massive discovery.

Jody is now the exploration manager for Lakeland Resources (LK.V).  Lakeland just announced an option agreement with another junior.  This will help the company increase the probability of a discovery without major dilution as the partner will spend $1.2 million over the next 12 months and $6.5 million over 48 months.  This will make Lakeland one of the more aggressive explorers in the Athabasca Basin with anticipated drilling beginning in the first quarter of 2014.

Lakeland's share structure may be one of the best in the Athabasca Basin with close to 30 million shares outstanding. Close to 40% is owned by management and institutions. There is a very small float for retail investors.
When everyone was looking at the Eastern part of the Basin, Jody suggested to look west which was underexplored and Patterson Lake was discovered. Now Jody is telling Lakeland to go to the northern part of the basin for the next major discovery as this area has been totally neglected by explorers. 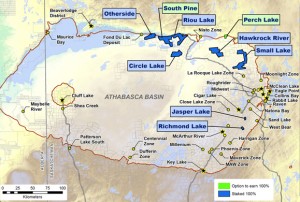 Lakeland has acquired a large land package across the Northern part of the Basin. Lakeland just announced that exploration is active on the Riou Lake Uranium Property located in the Northern Part of the Basin. They are doing the initial work for a winter drilling program in the first quarter of 2014. 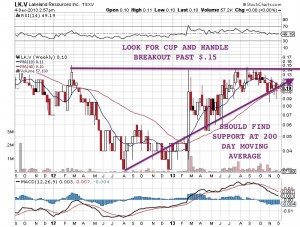 Lakeland believes there will be strong news flow over the coming several months that could build significant value in this early stage situation. Although this is early-stage and ground floor, this company has the people, the properties and the share structure to potentially create a lot of wealth for uranium investors.  Lakeland should find support at the 200 day moving average.  Look for a cup and handle breakout at $.15 which could lead to a major move.

See my recent interview with Lakeland's exploration manager Jody Dahrouge who is one of the best geologists in the Athabasca Basin.

Disclosure: Author/Interviewer owns Lakeland and they are a sponsor on my website.