Generally, bullish factors may be coming to a confluence in this natural resource market rebound, which we not only predicted almost one year ago, but we reiterated over the summer that such developments of a rotation from the overvalued dollar and treasuries into the undervalued precious metals and miners.

The current euphoria may be the “caffeinated” response to a severely oversold market combined with short covering.  Discretion in the marketplace is oft the better part of valor.   Be assured we are watching  this encouraging activity with an eagle’s eye.  It is most welcome as the mining stocks seek to emerge from their season of discontent-the summer goldrums.  The Post Labor Day risk on rally has presented us with a plethora of significant new developments.

One company that we recommended in July is U3O8 Corp (UWE.TO or UWEFF).  Since that time a lot of institutional interest and analyst coverage has been initiated.  The company has also graduated to the TSX from the Venture Exchange demonstrating its rapid growth from a small junior to a mid-tier uranium mine developer.  This Berlin Project will gain further awareness as it announces its Preliminary Economic Assessment by year end 2012 and move into Pre-Feasibility. 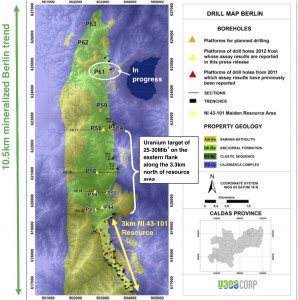 Yesterday, U3O8 Corp confirmed that they extended the mineralization at Berlin over 6.3km, which means that the resource may be about 1.5 times bigger than the original resource which is around 47.6 million lbs.  We expect more drill results from the northern portion and further infill results to expand the previous resource estimate.  Based on these exploration results showing the continuity of the mineralization to the north, we expect a large increase of uranium, vanadium, phosphate, molybdenum, rhenium, yttrium, neodymium and nickel.  We are excited that the company has reiterated its target of producing a Preliminary Economic Assessment by year end 2012.

We have been attracted to their flagship Berlin Project in Colombia where they showed incredible uranium resource growth in 2011, almost seven-fold increase and expect to see impressive growth in 2012.  The main project is in pro-mining, pro-business Colombia.  The Berlin Deposit also contains valuable amounts of phosphate and vanadium and rare earths as a byproduct.  U3O8 Corp. has shown some very positive metallurgical recoveries.  What is really fascinating about this project is that it might attract the eyes of the majors such as BHP and Rio Tinto who are dealing with rising costs and depleting mines in Austrailia and Africa.   The phosphate, vanadium and rare earths may pay the way with the uranium as pure profit.  The positive cost aspect of operating in Colombia may make the majors more hungry for this rapidly expanding asset. 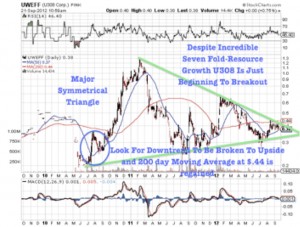 We expect the downtrend started by the Fukushima Accident to be broken to the upside and the 200 day moving average at $.44 to be regained.  It is finding support at its rising 50 day moving average and is forming a major long term bullish symmetrical triangle.  Despite an incredible seven fold increase in uranium resources it is still being ignored by the market and priced at long term support near three year lows.  This represents an undervalued play that could see a repeat of the fall of 2010 move where it made almost a seven-fold increase in price.

Sign up for my premium service to get these updates ahead of the masses by clicking here...