The Spark To Invoke The Spike In These Mining Sectors

For many centuries, the Middle East has been a simmering cauldron that now may be coming to a boil.  Across the centuries we have witnessed world events being influenced by what occurs in this geopolitical arena.

We have only to witness Abel and Cain, Esau and Jacob, Ishmael and Isaac, among others.    Even today, these classic blood feuds continues across the centuries.  They extend as far as Egypt,Darfour, Kashmir, Somalia, China and most recently Mali where there are many major gold mining companies operating.

This brings us to this moment.  We must keep an eagle’s eye on the Iran-Israel situation.    The main issue is that Tehran must sense that this moment presents them with a critical window of opportunity.   While The West is struggling to make some sense of a troublesome economic morass, Iran is working 24/7 to come up with a working nuclear warhead.

Oil has rallied off lows in October for six straight months outpacing equities, treasuries and precious metals.  It may be receiving a premium due to the Middle Eastern turmoil and may be forecasting an oil spike.  The $115 mark is a key psychological area which is about to be reached again and a breakout could cause a spike to $150.  Are investors positioning for a black swan event in the Middle East?

It should be emphasized here that the uranium and rare earth miners have been the only two mining sectors since the beginning of 2012 to outperform the S&P 500.  Both sectors have a very common attribute, these metals are crucial for energy independence and are already in a supply shortfall.  A spike in oil could be a major catalyst in the price of uranium and rare earths which are the essential ingredients for clean energy. 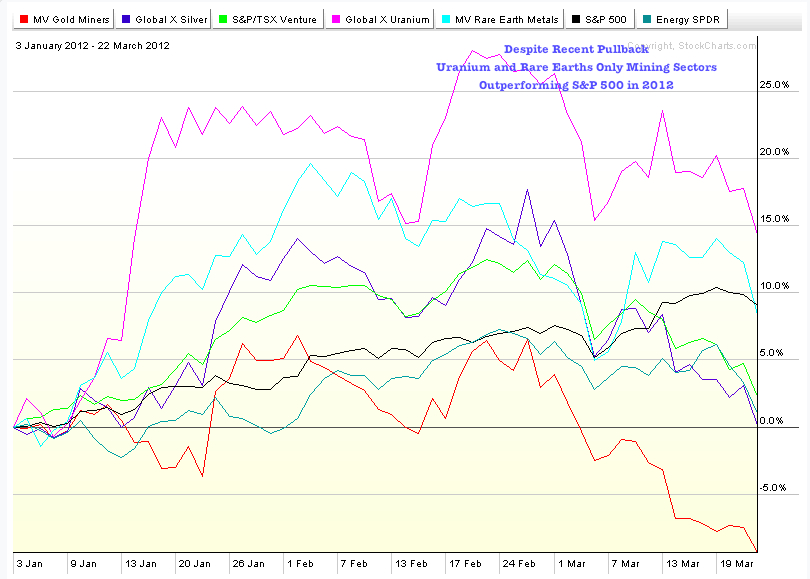 Understand that the International Atomic Energy Administration (IAEA) published a report to this effect back in 2011 which we highlighted to subscribers.  Heretofore, this arm of the United Nations has been loathe to publicize such data.  Therefore, it is surprising that an arm of the United Nations should be condemnatory of the Mullahs.  One could reasonably conclude that when the U.N. issues such a cautionary statement, it behooves us to listen.

Gold Stock Trades feels that the hour is late and attention must be paid.  While The West is weak economically and has its own basket of see-saw rallies one day and cardiac declines the next day that are seized on by the sharks of the media for the day’s news.  Therein lies the difference between the fiscal feud in The West and the religious feud in The Middle East.

Take note that the average age in Iran is below 28 years.    Remember that the young people recently demonstrating in Tehran might well have succeeded in overthrowing the old fundamentalist regime, but for the silence of The West including the United States.  The aging Ayatollahs realize that they must soon make their move while Europe and the U.S. are stuck in their economic quagmires.

Our position in uranium and rare earths takes time to germinate and reach fruition.  At the moment they may be out of favor as the herd piles into overbought “blue chips” not realizing that rare earths and uranium have bottomed and are actually outperforming.

The distraction of the daily markets are taken as temporary diversions as we patiently await rewarding paydays.  Imagine the effect that the closing of the Strait of Hormuz might have on the global financial markets and the need for energy independence.  Therein lies the spark to evoke the spike in our strategic metal mining selections.

As for The West it is a matter of survival so they must also consider preemptive moves sooner rather than later, which includes rebuilding national stockpiles of uranium ore and critical rare earth metals.  We are witnessing warnings that there are sleeper cells throughout the European and U.S. metropolitan cities.

What do all these stratagems mean for GST subscribers?  Gold Stock Trades believes that the Middle East kettle may boil over which may ignite the uranium and rare earth resource sectors in a Vesuvian spike.

Recently the boards were colored crimson.  Only two stocks stood out in the green.  It was Corvus Gold and Tasman Metals.  Corvus made a high grade discovery on its North Bullfrog Project.  Tasman announced an extremely robust PEA, with a lot of revenue from dysprosium an element vital to modern industrial nations and at risk of a supply shortfall.

For sure the majors and sovereign governments including the Chinese are sitting on large amounts of cash and treasuries and are in trouble.  They must rapidly look for promising uranium and heavy rare earth miners.  We feel confident that our current list has sufficient takeover candidates when the big boys (Barrick, Goldcorp, Agnico Eagle, Cameco, Molycorp) go shopping.

Gold and Silver is undergoing a retrenchment which some observers consider a bearish signal, but we consider a secondary buying opportunity.  Notice in 2011, that base metals involved in industry were grossly underperforming gold.  Should a spike occur in the Middle East all of these boats might rise in a tidal like move especially critical energy metals such as uranium and rare earths. Remember that the mills of our miners grind exceedingly slow and fine except when exogenous developments such as a surprise eruption in the Middle East.  The tide may turn to truly value the miners which uncharacteristically has underperformed bullion.  Remember for most of this past decade and over the long term the miners will continue outperforming.

Charts on gold and silver exhibit what is called by some a “reverse head and shoulders” which is a bottoming formation.  The 200 day moving average is still sloping higher maintaining the long term uptrend.  Gold and Silver are currently testing support at $1600 gold and $30 silver.  These consolidations are characteristic especially after such powerful upmoves in 2010 and 2011.  It may now be the uranium and rare earths turn to play catch up.

The recent end of 2011 lows have held and we may see a reversal off of the lows in the miners.  At this time gold, silver and the miners may be the most oversold it has been since the 2008 credit crisis  which proved to be an excellent buying opportunity.  We believe the charts are basing and preparing for its next move higher which may be the breakout move.  We may be witnessing the shakeout before the breakout.

This low volume rally in equities and uncharacteristic pullback in the miners is characteristic of a fear driven market that does not follow traditional methods of fundamental analysis.  Eventually all the miners will break out of this zig-zag pattern and outpace equities as they have done over the past decade.

Our subscribers have been informed that the ebbs and flows of nuclear
power development are now morphing into a genesis for possibly turning
Saskatchewan into "The New Saudi Arabia". Prime Minister Harper returned
from China with a deal that brings almost $3 billion dollars worth of
energy deals which includes uranium from Cameco's motherlode in the
Athabasca Basin to satisfy China's insatiable hunger for its domestic
expansion into the construction of nuclear power plants.
The uranium producers are rallying and we believe that the explorers in
the Athabasca Basin may start their breakout move as well especially
Athabasca uranium which hit alteration on three out of five holes in late
November.
Nearly one year after Fukushima, the news continues to support the upward
move in uranium miners and our belief in the long term viability of the
sector.  The Chinese National Energy Administration announces that their
countries hunger for nuclear ore is increasing and that they are looking to
acquire Canadian uranium miners.  There are also indications that both the
Germans and the Japanese may be turning back on nuclear reactors.
For some time we have been a lone voice saying that sanity will return to
this sector.  The long term supply demand fundamentals are just too strong.
Investors are beginning to realize that wind and solar just can't compete economically
with nuclear.
The big boys are focusing on the Athabasca Basin in mining friendly
Canada.  The majors such as Paladin, Rio Tinto, China and surprisingly the
Government of Iran are having problems dealing with the ever rising threat
of resource nationalism as exemplified by their experience in Namibia,
which is making noises that they may institute a super tax on miners.
The superiority of the Athabasca Basin is compelling to the majors and to
China.  One company taking advantage of this increased interest in the
basin is Athabasca Uranium (UAX.V or ATURF) who today announced
mobilization of their drilling crew.  UAX CEO Gil Schneider commented "With
the positive results from the program last winter, the company is extremely
excited about exploring the Keefe alteration zone..."
Listen to my recent interview with Reza Mohammed, Exploration Manager of
Athabasca Uranium discussing the history of their flagship Keefe Lake
Project, their exploration goals this year and why the big boys are
interested in the Athabasca Basin.