From the players who gave Newmont (NEM) and Franco Nevada (FNV) to the world of precious metals, there are significant new developments. Gold Stock Trades focusses on the significance of expansionist moves that slowly but surely augurs a profitable future for New Gold.

New Gold has consolidated the ownership of the Blackwater Property by taking over Silver Quest.  The importance of this particular chess play not only allows New Gold (NGD) to command precious territory in British Columbia, but builds a commanding (100%) ownership of a rapidly growing deposit in a mining friendly jurisdiction.

New Gold has a growing and large cash position.  They are committed to using these dollars to build an important growth profile.  The management team of New Gold represents the rare combination of aggressive new talent united with experienced prospectors with a great track record.

With this acquisition, New Gold’s  Blackwater resource will increase from 5.8 million ounces to 6.5 million ounces.  Additionally the company added a very large land package that boarders the western portion of its current one.  Management intends to be there for the long haul and they want total ownership.

This reminds us of the example of Fronteer Gold which afforded us a sizable profit as they were eventually bought out for $1.3 billion.  Click here to see prediction of buyout made on thestreet.com.  Fronteer made sure to buy 100% of the Long Canyon deposit from AuEx.  Once this deal was secured new high grade discoveries were made on the property.  This made the new bride very attractive, exactly for what Newmont was looking.

GST feels that this recent New Gold transaction is prophetic for profitable growth.  New Gold’s Management is writing an outstanding prescription and are located in the right pharmacy.  Expect a series of positive developments emanating from this exciting growth prospect as they complete these acquisitions. 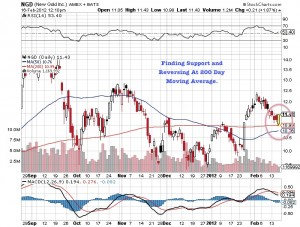 Today New Gold is reversing after hitting the 200 day moving average and long term trend support.  New Gold’s strong cash position and increasing profit margins puts them in a unique position to capitalize on this current correction in the miners.  This experienced management team is using this current weakness to increase their long term position in British Columbia on sale.  It is wise to follow these astute investors and look at this recent correction as a buying opportunity.  Since early 2009 when we initiated coverage on this company at 1/6th the price, New Gold has done a remarkable job with keeping Cerro San Pedro running in Mexico, developing El Morro with Goldcorp in Chile and advancing New Afton in British Columbia to name a few.  Long term shareholders have been rewarded.

On a related note, the recent volatility in silver (SLV) in 2011 has created an oversold position not seen in several years.  Despite downside gaps silver appears to have found support at the $28-$30 level.  It still has not yet made a decisive breakout of the $35 area to close the downside gaps from mid September.  The recent crossover on the MACD shows that the momentum for buying silver is increasing indicating a possible breakout.  The bottom will be confirmed with an upside breakout at $35.

Another company we began following in our premium service is Corvus Gold (KOR:TSX or CORVF:OTC).  We just returned from a trip to its North Bullfrog Property 90 minutes north of Las Vegas near Beatty.  Corvus has just hit high grade gold mineralization in this major step out program and is just beginning to start its 2012 high grade exploration drilling program.  Should the results continue to proliferate it may well transform what is now a small exploratory company into a major domestic resource organization.

Drill results are so encouraging that Corvus CEO Jeff Pontius who is not ordinarily given to hyperbole stated, “...the encouragement the North Bullfrog Project has generated over the past 12 months has led us to substantially expand our property position as it appears we may be on top of a major new Nevada gold discovery in an area with excellent infrastructure and a highly skilled workforce.”

Listen to our recent interview with Corvus below.