Many years ago, farmers in Pennsylvania noticed a murky liquid seeping up through the soil. It didn't take long for entrepreneurs to find a use for this oily stuff. It was advertised as a cure for baldness, impotence and sundry medical conditions. Little did the super-salesman of that time realize that they had come across a vital component of the industrial revolution. They called it Snake Oil.

Recently, a professor at the University of Tokyo, spinning a story, announced a latter-day version of the discovery of the lost continent of Atlantis. Brought up from the briny depths of King Neptune were stories of huge deposits of rare earth elements (REEs) located 20 fathoms beneath the sea. You might as well chalk this one up to tales about Rhinemaidens, leprechauns and sunken pirate treasures. Truth be told, the professor's article may have value for readers of science fiction. You might find a pot of gold at the end of Finian's Rainbow more quickly than you can bring up REEs from Davy Jones Locker. The search costs would be prohibitive. You would be well advised to file this story into the bin labeled Myths and Fairy Tales.

Now back to reality. Mitsubishi has joined the growing ranks of Lynas Corporation (ASX:LYC) investors. The company recently disclosed the purchase of a 10% stake accumulated between the dates of May 24 and June 7 at the cost of approximately AUD$325 million. In the face of the Malaysian brouhaha and the World Trade Organization (WTO) ruling against China, Mitsubishi's buy and Siemen's recent joint venture is a bold vote of confidence that Lynas is here to stay and that REE resources must be produced outside China.

The WTO may take a long time in the execution of its decision as the matter falls into the delaying hands of lawyers, appeals and politicians. However, experienced market players have been through news-driven developments on other occasions. Stocks can be drawn and quartered by media stories that can exacerbate day-to-day events and cause short-term fluctuations only to be forgotten the next day. With Lynas, we are witnessing a classic example of how panic can influence hasty and erroneous conclusions. It is important to play our cards close to the vest.

In assessing the barrage of stories flooding the news, we are deluged with often-conflicting items. One story purports that the Malaysian Prime Minister is requiring Lynas to institute several corrective procedures before moving forward there. Lynas responded that it would get the work done within the targeted end of 2011 timeframe.

Stories and opinions from anonymous sources hinting at further delays could be planted to confuse the lay retail investor. Possible short sellers are driving skeptical stories in order to turn a profit. Gold Stock Trades takes anonymous sources and fishy stories with a grain of salt.

Articles in the press, namely The Wall Street Journal, have highlighted the possibility that we may be witnessing a bubble in the rare earths. They cite a preponderance of short sellers hovering as vultures in the skies over the sector. Moreover, there may be the presence of a fine Chinese hand at work. After all, it is to Beijing's benefit to throw as many monkey wrenches as possible into the grist for the Malaysian mill.

Where does this leave investors? At this moment (and I stress moment), we take a long-range view. Gold Stock Trades is convinced that the REE arena will reemerge as a source of profit once this particular black swan is overcome. We maintain a cool hand in what is a developing story.

Not all the cards are in the hands of the Malaysian bureaucracy and the Green Party. Many interests are looking forward to Lynas providing REEs, particularly Japan and its highly technologically dependent industries. Lynas may well have other moves that it can make. Is it too fantastically far-fetched to think it could dump Malaysia and move to another venue closer and more economical to its Australian base? Think Papua or Borneo. After all, Sumitomo Corporation of Japan has bankrolled Lynas thus far. This is only a matter of conjecture at this point and Lynas will make every attempt to satisfy whatever corrective measures are necessary to develop the Malaysian project. One way or another, these critical ores will be refined to satisfy the survival, not only of Japan but advanced industrial interests elsewhere.

At this point, what may be impediments on the Lynas road to production may actually accrue to the benefit of other REE recommendations on our select list. These companies are undervalued and just emerging. They have resisted falling below long-term trendlines and are now testing overhead resistance areas. The survival of Japan's modern industrial base is at stake. It is full speed ahead for large, corporate investors who stand undeterred in their growing position of the stock.

The Lynas stock chart reveals the penetration of the 50- and 200-day moving average to the upside. This strength continues in the face of bad press, negative news and announced government hurdles. Technically, this reveals that the stock has passed from weak to strong hands. Additionally, a very significant development has occurred with another one of my recommendations. Tasman Metals Ltd.'s (TSX.V:TSM; OTCPK:TASXF; Fkft:T61) Norra Karr Project has been declared a National Interest by the Swedish Government. This classification is crucial because it guards Norra Karr from any land use issues that may occur in the future. The importance of this development is best expressed in the following words issued by the government: "REEs are of great importance in modern society and access to these elements is very limited within Europe. The Swedish Geological Survey is therefore of the opinion that assets such as these should be accessible to future generations. Norra Karr is a very important project from a material supply point of view, both for Sweden as well as for Europe. The mineral resource at Norra Kärr is the only NI 43-101 compliant REE resource in mainland Europe."

Tasman's Norra Karr project is located near the capital of Stockholm. The site has great infrastructure, which allows year-around access. This is no Wall Street house hyping a stock. It bears the official seal of the Swedish Government. Attention must be paid. 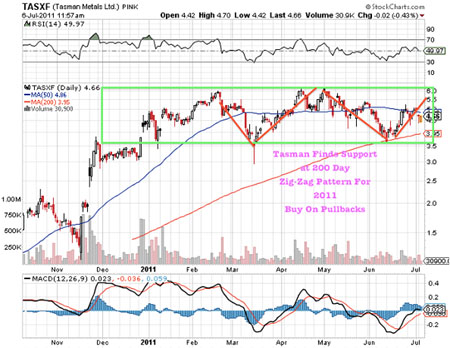 Tasman has found support at the 200-day moving average and maintains its long-term uptrend. The company did not violate March lows in its most recent selloff since May. Tasman has been stuck in a range between $3.50 and $6.00. In May, the commodity selloff brought Tasman down along with it extending the consolidation. Now it is forming a six-month base and did not break down technically in early June. Tasman is forming a W consolidation and I expect a breakout into new highs by Autumn of 2011.

Similarly, Ucore Rare Metals Inc. (TSX.V:UCU; OTCQX:UURAF) is in a kindred situation. The governor of Alaska is on record advocating fast-track development of this company. Ucore's Bokan Deposit is the only heavy REE (HREE) mine on American soil. It has based and reversed in the $0.60-$0.65 area for many months, making a major move. I would not be surprised if Molycorp Inc. (NYSE:MCP), which is not exposed to HREEs, gets interested in Ucore's assets before it is too late. For the past six months,Gold Stock Trades has been highlighting Ucore as a takeover target by such entities as Molycorp. Such majors stand to profit from the inclusion of HREE Ucore's dominance. The possibility of Ucore being taken over by resource-hungry majors is gaining increasing attention from brokerage houses and institutional interests. The National Strategic and Critical Minerals Policy Act is now moving through both the Senate and House of Representatives. It enjoys bipartisan sponsorship at the highest levels because of the importance of fast-tracking domestic production of vital metals for national interest including Ucore's Bokan Mountain HREE deposit. That is not Snake Oil; that is real opportunity.