He who fights and runs away
May live to fight another day;
But he who is battle slain
Can never rise to fight again.
-- Oliver Goldsmith

Traders entered the new year exiting their commodity positions on fear of growing austerity measures and possible exit strategies out of Central Bank quantitative easing strategies. There has also been a huge move into risky equities from traditional safe havens, but that may end in the next few weeks.

When the conductor desires to lower the volume and tempo of the orchestra, he motions downward. After sometime it is followed by a loud and explosive crescendo. At this time I am navigating readers to be cautious and play defense in equities, gold, and mining stocks. This correction will take some wind out of the sails of latecomers to this precious metals rally who bought when gold and silver were way extended in October and November of 2010, and who are now having to suffer through a possibly quick but painful decline. However, this current shakeout will provide a slew of new mining recommendations and buy signals on gold and silver bullion. Corrections in secular bull markets shake out the weak hands, while the disciplined investors wait for oversold conditions and long-term support to add or enter long positions. Many high-quality mining stocks are creating sound bases and will provide highly probable signals where the odds are more favorable for a significant gain.

I have been counseling defense since October 2010 -- when I sold my core bullion positions and moved into uranium, molybdenum, and recently rare earths -- and have been making very large gains in the past three months. The gold bullion market has been range-bound and volatile. Our firm's individual miners have acted much better, outperforming gold and the large-cap miners.

Now this consolidation in gold just made a fake breakout for the third time after finding support at the 50-day moving average. There is nothing as bearish as a fake breakout. It was quite important that this most recent attempt to break out from the 50-day should have been successful. That third reversal was quite bearish as institutions came back after the holiday break to sell their gold positions and bid up the US equity market. This signals that the short-term trend has been exhausted and that we could see a quick shakeout in gold and mining stocks. Gold appears to be forming a bearish head-and-shoulders pattern. Further weakness today should confirm this pattern and the selling should intensify. 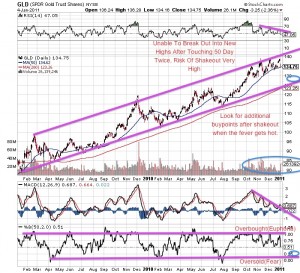 Gold will again approach our long-term support areas indicated in the blue circles in the chart above, which is when I take a large and aggressive position in bullion and mining stocks. I prefer to buy at support and when fear is high. All markets are volatile with ebbs and flows between euphoria and gloom, including gold. This correction is very healthy for the long-term secular bull market in precious metals. I believe it still has many years to run, but there will be corrections and times to buy when fear is increased and where gold is at key support levels. That is why I have urged readers to lock in profits when stocks have reached targets as they will be able to enter at highly profitable times similar to the end of July 2010. This is a disciplined approach which removes getting caught in the euphoria and gloom of the market. This gold topping pattern needs to be monitored, and during times like this, the quote above from Oliver Goldsmith needs to be reviewed. In the market, one must learn which battles should be fought and when it is better to retreat.

The high volume distribution and failed breakouts into new highs is indicating institutional selling. I choose to fight another day.

Over the past three months, gold has been consolidating, working off overbought levels. I believe this next correction will set up precious metals investors with the next major buying opportunity in bullion like we saw in late July 2010.

There will be profits in miners and precious metals as we have seen in the past. Over the past few weeks it has been hard for me to find sound patterns, and I was reluctant to make new recommendations because of the overall gold bullion market. The recent bounce off the 50-day failure at new highs signals that now traders should wait for further weakness as this will provide the next ideal buying opportunity. The bearish head-and-shoulders pattern coupled with high-volume reversals should signal caution. Instead of getting caught in the hysteria, it is best to try to capitalize on it.