The global debt crisis and the war on deflation by the Federal Reserve is causing precious metals to approach a key resistance level.  Gold is nearing a 52 week high while silver is close to breaking $19.  A break above these levels on high volume could be the beginning of a major move higher.

Gold and silver has been a safe haven asset.  Many concerns were expressed if miners would collapse in a weak equity market.  However, since the last Federal Reserve meeting, gold and silver has shown impressive relative strength compared to the overall market. The Federal Reserve discussed the increase of treasury purchases to keep interest rates artificially low. They also made it clear that every attempt will be made to prevent deflation.  This low interest rate environment and weak economic outlook which may continue for some time has encouraged investors to move money out of equities into safe haven assets such as gold and silver.  Gold and silver is also gaining interest as investors are realizing bond yields are too low and may be risky at these level.

The Fed’s greatest fear is deflation, high unemployment and a move into new lows in equities before the election.  If the S&P continues to deteriorate and unemployment data comes in negative, I expect an announcement of more central bank interventions to reflate the economy.  This next round of quantitative easing could cause a massive rush into gold and silver.

Many are concerned of the safety of fiat currencies during a global debt crisis.  The global economy is built on spending and investing.  Many investors were concerned if a downturn in the equity market would drag down junior miners.  These past couple of weeks have proved that is not the case.  Junior miners have made major moves higher.  A breakout into new 52 week highs in the miners is highly probable especially as the price of bullion breaks out. 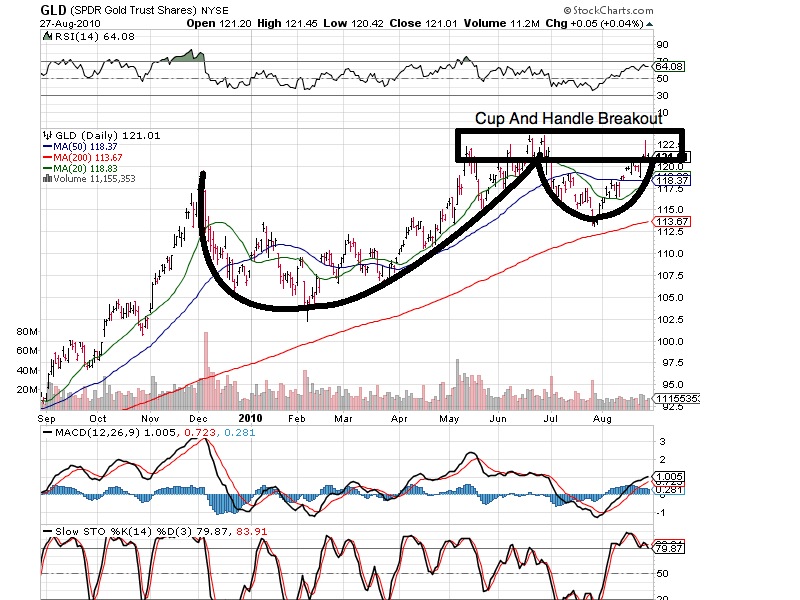 The saucer (cup) and handle pattern is the chart reader’s favorite pattern.  Great performing stocks tend to have a strong base before an extended move.  Gold’s (GLD) pattern is very rare and this setup tends to be very profitable.  Similarly to what we saw in September of 2009, I expect a major breakout.  Is this pattern showing investors that a major event may be brewing?  Time usually tells the tale as news or events are announced after the breakout.

High quality gold and silver explorers are making major moves already.  It is important to pay attention to the gold and silver junior miner sector as we may be setting up for peak gold and silver.  High quality explorers with mineable assets should be followed as gold and silver discoveries are rare and producers are paying a premium for these properties.  These miners tend to have great leverage to the price of bullion especially if we see more government interventions and quantitative easing.

Yesterday, Fronteer Gold, a stock that I have recommended to my readers bought out Auex Ventures to control completely the Long Canyon Project.  The Long Canyon discovery is high grade and open pit. Fronteer is consistently coming out with impressive results from this project.  Long Canyon represents continued resource growth as it is expanding and open in all directions.

A major move in bullion could cause these explorers to make large percentage gains.  If you haven’t researched high quality junior miners yet, now is the time before a major move.