In a recent landslide election, Republicans took back control of the Senate and House. President Obama's approval rating is very low.  Although there a few making money in the stock market, the majority of the American people are fed up with close to 100 million people not working.  Welfare and entitlement spending is out of control.  The debt is still soaring close to $20 trillion and the dollar is rising making it even harder for politicians and banks to avoid default.

Somehow irrationally despite billions of dollars being printed under the guise of QE, the US dollar is rising.  The question I ask is how long do you really believe this dead cat bounce in the US dollar will last?

It may be just a bounce in a long term downtrend and is only relative to the other fiat currencies in fast decline.  Smart investors should be accumulating gold and silver coins and high quality junior mining stocks trading now at historic lows.  It should be noted that coin sales are picking up especially mint grade numismatics. 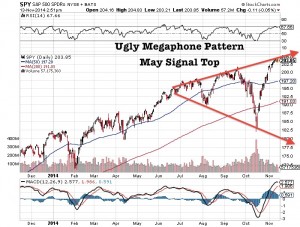 Avoid the large cap equities like the S&P500 making a classic megaphone top, US dollar and long term treasuries as these are markets overbought and where the fundamentals do not justify the current valuation.  I am very concerned about the exuberance in banking and real estate as the numbers of unemployed in America are still at record levels.  Avoid "fairy tale" sectors which try to say that Price Earning Ratios do not matter or that we are in a new era which justifies obscene valuations.

The Middle East Arab Spring has turned into an Islamic Winter.  Black swans could still be on the horizon.  Now the US is looking to team up with Iran to fight ISIS and possibly ignoring the threat of Iran's nuclear ambitions.  Russia just stated  What we are seeing with the rise of the dollar and decline in commodities may be part of the war no longer fought with bullets and missiles but with foreign exchange rates.  The ruble is collapsing along with the Russian Economy.  China and Russia may begin to look to trade in Yuan to avoid the negative consequences of currency wars.

Those with US dollars are able to purchase gold and silver at low prices despite record demand.  The US Mint is showing record sales.  Many have asked how is gold and silver going down in price when demand is at record levels?  The only answer is that some games are being played in the paper market.  This week the regulators just fined the major banks for manipulating exchange rates.  Investors may be just beginning to lose faith in the manipulated paper markets and are just buying physical coins.  Some numismatics such as Mint Grade Morgan and Peace Silver dollars have had a nice rise this past year despite a decline in gold and silver prices. 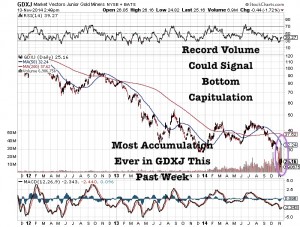 The junior gold miners (GDXJ) are hitting record volumes which indicates massive capitulation.  The bear may be getting exhausted.  We know that bear markets end in panic and many bail at the low.  This time of the year the San Francisco Resource Conference was a main gathering for junior mining investors for many years.  Now it is cancelled.  This indicates to me that the public investor has panicked out chasing the bull market in US large caps, the dollar and long term treasuries.

When the retail investor is gone, the smart money accumulates.  Don't rush, there may be retests of this bottom and long term resource investors should look to add to high quality position on weakness.  Remember that bear market bottoms are the best times to buy.  Notice the increase in recent M&A deals such as the acquisitions of Brigus, Rainy River, Cayden, Prodigy, Osisko, Bayfield and Scorpio.  I expect the junior mining sector to get leaner and meaner with larger, stronger and consolidated stories.

One of my favorite takeout targets in the gold space is Integra Gold (ICG.V or ICGQF) who owns the Lamaque South Gold Project and the Sigma Lamaque Milling Complex.  The Abitibi Greenstone Belt is one of the areas where the majors are looking to expand.  Yamana, Agnico, and Goldcorp are all looking to expand their footprint in this highly profitable region.  Integra owns one of the highest grade and most advanced mines in Quebec, possibly one of the best mining jurisdictions in the world and a mill in an area with infrastructure and a skilled labor force.

Integra has hit some really high grade in its Parallel and Triangle Zone.  They recently acquired the Sigma mill which is only 500 meters from the Parallel Zone.  Its a fully permitted, 2,200 ton per day mill and investors should realize that this acquisition moves Integra closer to production and cash flow.

Integra announced a major permitting update due to the mill acquisition which shortens the timeline to production.  Integra has been informed that they will not require a Federal Environmental Assessment for the combined mine and mill.  Permitting timelines are crucial to majors who may be following Integra and waiting for its upcoming Preliminary Economic Assessment due shortly which is going to include 40,000 meters of additional drilling.

Integra President and CEO Stephen de Jong said in the recent news, "From a time value perspective to cash flow, this ruling should save an estimated 6 to 12 months as we progress towards a production decision, in addition to the positive timeline implications stemming from the infrastructure obtained in the acquisition."  See the full news release by clicking here... 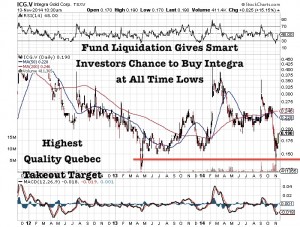 Recently Integra was heavily sold by panic sellers who had a margin call.  I expect tax loss selling to also be in play with recent weakness.  Nevertheless, Integra should be considered as a high grade and economic junior which has some of best chances of getting into production.  It could be considered a takeout target especially after the PEA is announced which will take into account all the additional drilling and the Sigma Mill acquisition.
See my recent interview with Integra CEO Stephen de Jong by clicking here...
Disclosure: I own Integra Gold and the company is a website sponsor.