One of our favorite mining equities has been the ongoing advance of New Gold (NGD). On several occasions we have made doubles in this ongoing saga since we first highlighted it in early 2009. Click here to see original recommendation. The chart is extremely powerful. This could well be the hallmark of an ongoing powerful advance. It refused to violate its 200 day moving average despite sector weakness. 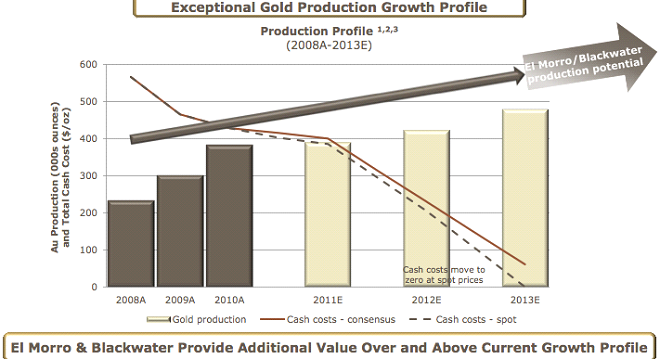 This relative strength may be telling us that New Gold may well be one of our leaders as we return to an equity that has shown consistent strength in volatile markets.

They have one of the best cash flows in the business. Additionally, they represent a strong presence in gold and silver as well as copper.

This abundance of riches increases with the little noticed but all important and fully funded New Afton Project in the friendly jurisdiction of British Columbia. The bride becomes increasingly more beautiful when one considers that New Afton is fully funded, permitted and ready to be carried across the threshold of productivity.

New Gold is strategically positioned to profit from this new upward leg in precious metals. They have a strong balance sheet in the hands of experienced management represented by Oliphant, Gallagher and Lassonde, who have a proven track record of building major mining companies. 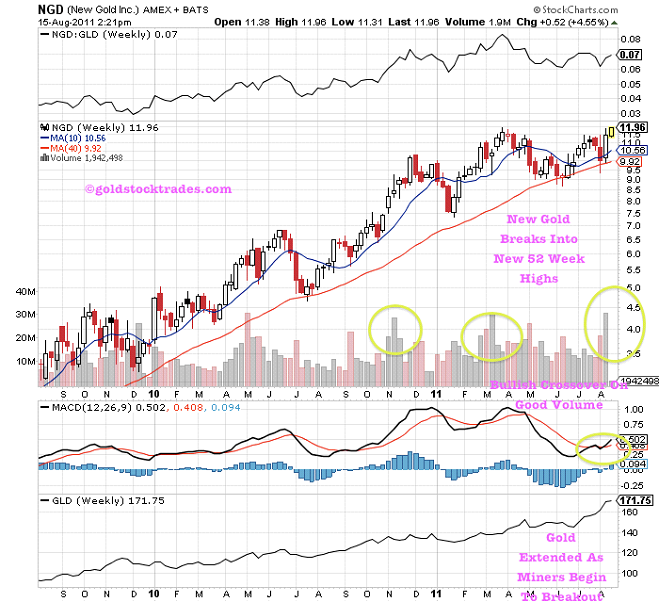 Gold Stock Trades has maintained a strong hand on signaling the completion of the basing process in mining stocks (GDX) in relation to gold (GLD) and silver (SLV) bullion prices. Right now it will suffice to alert readers that one of the most salient technical signals is occurring right now-The dreaded death crosses are being transmuted into euphoric crosses of gold.

For the past four months, an eagle eye has been kept on the number $52.50 on the gold mining equities (GDX). That was the line in the sand that we drew for our subscribers. It represented the technical juncture of key support levels, which can be referred to continuously in our published archives. That line held. The basing process is being completed at this very moment. 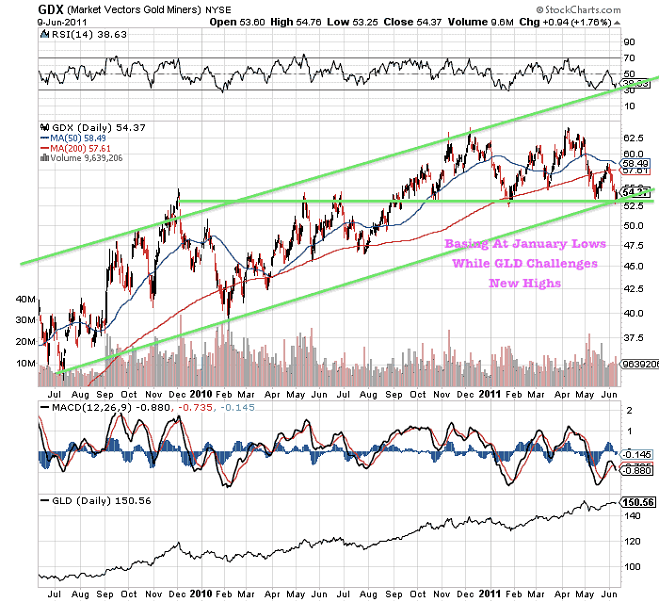 Currently as of this writing it is rising above its 200 day moving average, the critical long term trend indicator. This reversal now above the all important 200 day moving average is among the most bullish of buy signals as the death cross of the 50 day which reversed below the 200 day in June now crosses above making a bullish golden cross. 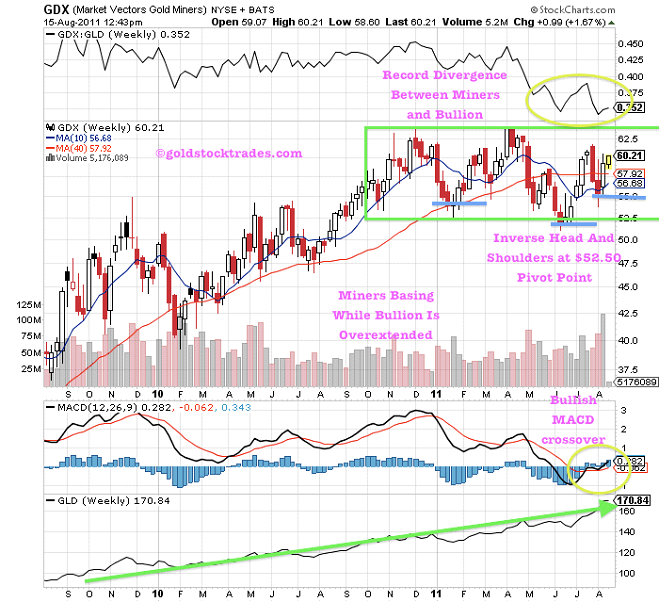 Many analysts had been concerned as to the effect of the expiration of QE2 on the global financial markets and left the commodity arena. Instead, gold stock trades maintained a steady hand on the wheel. Unflinchingly, we stated it was a short term, positive and characteristic correction, necessary to eventually propel us into new highs. As any runner might attest the sprint forward is preceded by a move backward out of the running block in order to gain momentum for the breakout ahead.

At the same time silver is also breaking its own 50 day moving average to the upside despite a series of increasing margin requirements designed to temper the upward move. This upward move is quite bullish as it may signify that the advance in silver is not to be thwarted. As gold is breaking new highs, silver is just beginning to play catch up.

Careful monitoring of the uptrend is required.