There is a company gaining market share due to the recent acquisition of Motorola by Google.  In 2011, Google bought Motorola for its Android Operating System addressed for consumers in the use of smartphone and then sold off the rest of Motorola to other outfits.  This left a huge void in Motorola’s Business Unit which sold “connected-vehicle” devices to fleets across the transportation sector.  Its a big $7 billion market that this small company is looking to build its market share. 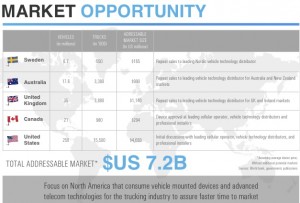 These devices Siyata Mobile (SIM.V) makes connect voice, data and fleet management tools.  After Google’s acquisition of Motorola this area of the business for commercial mobile operations was neglected yet demand of these products still remained.  That is where Siyata Mobile (SIM.V) came in to fill this huge void. They acquired a lot of R&D from Motorola.

Motorola used Israel for a lot of its research and development and Siyata brought on some of the scientists together to make the best possible connected device that is up to date and is cutting edge.  Siyata is doing that right now rapidly growing sales of these devices in Europe, Middle East and Australia over the past three year. 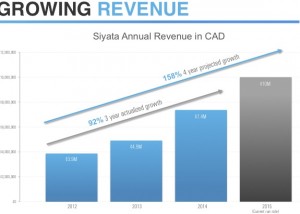 Sales are growing at 53% year over year and recently reported unaudited record sales of $7.2 million for the first three quarter.  This year looks good but 2016 could be great.  Siyata is now being sold in new jurisdictions and they are bursting into many new industries with their devices.  This should grow sales exponentially as they are now entering the massive North American Markets. Siyata Mobile (SIM.V) recently announced a significant partnership with Telus (TU) in Canada and I hope to hear soon that they enter the huge US market.

Marc Seelenfreund, CEO of Siyata commented, “These are exciting times as we continue to see strong demand for our products from recurring orders from existing customers, as well as introducing several new customers in new markets, such as our recently announced partnership with Telus in Canada. We have a great opportunity to grab market share in the lucrative commercial fleet market.” 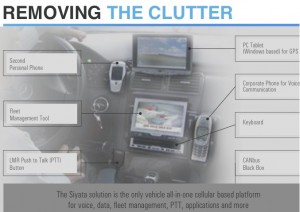 Management believes they have a first to market competitive advantage with technology and regulatory approvals so that they could be the North American market leader over the next two years.   Its quite special to find top notch Israeli tech deals with an improving balance sheet at this low valuation under $18 million.

Siyata (SIM.V) has already proven that they can sell these devices and already sold over 100k units.  If a major company is shipping millions of dollars worth of goods across the country these devices can assume the identity of the vehicle.

New laws are being enacted to prevent distracted driving from commercial operators.  These devices can be programmed for time logging and text blocking technologies with push to talk technology that can be used in law enforcement, construction, mining, oil/gas etc like walkie -talkies.  Google and Apple are not focussed for commercial business but on retail consumers who don’t need these specialized solutions.

In the past, Motorola was the big supplier, however, most of their products are obsolete.  Siyata is hoping to take over that market and be the leading supplier especially in North America.

I recently purchased shares through a Private Placement priced at $.30 CAD that closed several weeks ago.  The last I looked it’s trading at still a significant discount to that financing so you can get in 10 cents cheaper than me and some of its large shareholders.  Look for downtrend to be broken to the upside as technicals should follow the improving fundamentals of the company. 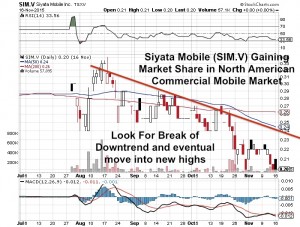 The time may even be more propitious now to build a position as they just announced their Canadian wide launch with TELUS dealers.  TELUS has certified the use coast to coast on the 4G network.

Marc is the founder of the company and a Tank Commander for the Israeli Defense Forces (IDF).  Around 60% of the 72.5 million shares are owned by the parent company and the Shamrock Israel Growth Fund.  The company has around $4 million CAD in cash and 8 million warrants at $.60 putting them in a strong financial position to grow.

Disclosure: I own Siyata Mobile (SIM.V) participating in the recent PP at $.30 CAD and I bought more at the end of October in the open market.  Siyata is a current website sponsor.  Conflicts of interest apply as I would benefit if the share price rises.  Please do your own due diligence.