In November I introduced a Tech Deal that came public on the TSX Venture Exchange which is headquartered in Israel. A lot of Motorola's Research comes out of Israel and I was quite fascinated by this unique deal that was growing at an impressive pace in a huge multi billion dollar telecommunications sector. Israel is one of the best incubators of telecommunication technology in the world.

See that article from a few months ago by clicking on the following link:

Siyata recently announced unaudited revenue of $9.9 million in 2015 a 34% increase year over year showing increased demand for their 3G Commercial Vehicle Devices. According to Siyata, the company has seen four straight years of consistent growth building partnerships with mobile carriers such as Telus and Bell. Over the last four years, sales of the Truckfone and Voyager devices have consistently increased in multiple jurisdictions around the world, while Siyata partnered with multiple mobile carriers and distributors to meet the needs of commercial fleets and vehicles with aging devices.

See the Press Release on reporting record sales by clicking on the following link:

“We are very pleased with our continued growth in 2015 and industry acceptance amongst mobile carriers, distributors, and their clients,” states Marc Seelenfreund, CEO of Siyata. “We anticipate 2016 to be another year of strong sales growth as we enter the North American market.” Stay tuned to news as they are partnered with Telus and Bell in Canada. I hope to hear news that they are expanding in the United States and partner with a US carrier.

Recently Siyata also announced that one of its long term customers, a large mobile carrier in Israel ordered 850 devices during February to meet demand.  This is a monthly record amount as fleets need to update to 3G compatible devices as 2G is shutting down.  There are millions of vehicles on the road that need to update to 3G and Siyata Mobile (SIM.V or SIMFF) could continue to hit record achievements. 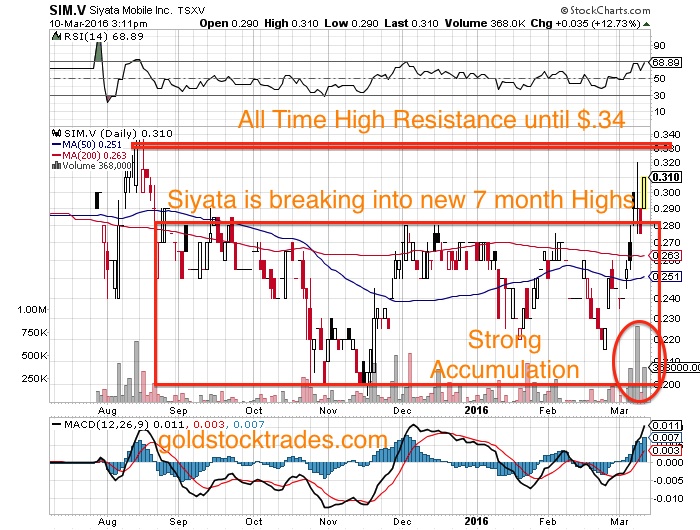 Siyata Mobile (SIM.V or SIMFF) is breaking out into new 7 month highs and has a little more resistance when it first started trading at $.34.  After it breaks through this area it will be in new high territory and could have little resistance moving up to the warrant strike price area at $.60 over the next few months.

Listen to my interview with Siyata Mobile CEO Marc Seelenfreund by clicking on the following link.

Disclosure: I own shares of Siyata Mobile and the company is a website sponsor. Please do your own due diligence and be aware of the numerous risks when investing in early stage public companies.