Will The Uranium Price Make a Fourth Quarter Comeback? 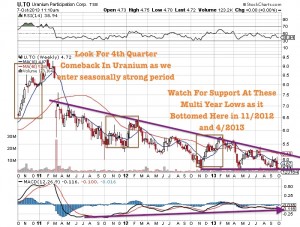 Just recently announced, Fission Uranium will buy Alpha Minerals for $185 million in order to have 100% control of the Patterson Lake South Discovery.  Many analysts are saying this is the best discovery in the Athabasca Basin where grades are exponentially higher than the rest of the world.  I don't think Alpha shareholders should give that asset up in the middle of a drilling program.  Denison (DNN) is making an offer for Rockgate at ridiculously low levels. Energy Fuels just acquired Strathmore to try to become a bigger player in the U.S. market.  Although I am not a shareholder of Alpha or Rockgate I would vote against these bids as they may be coming at the bottom of the uranium cycle.  Think what these assets could be valued at when uranium is at a reasonable price.

Don't be surprised to see further merger activity in the emerging Wyoming producers especially Uranerz (URZ) which has possibly the best land position in the Powder River Basin where Cameco is expanding production.  Uranerz is on the verge of commencing production at its Nichols Ranch in Wyoming. 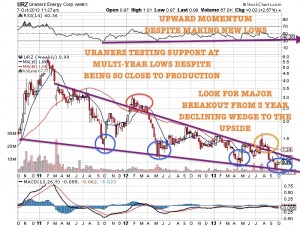 This increase in M&A probably means that either Cameco, Denison or Rio Tinto want to acquire assets sooner rather than later.  It must be remembered that the Athabasca assets are extremely early stage and although the uranium assets may be high grade, it could take thirty years to build a mine.

Cigar Lake, which is the largest high grade undeveloped deposit in the Basin was discovered in 1981 and has still not yet produced one pound of uranium.  Cameco is continuing to delay startup.  The grades are phenomenal there, but Athabasca has challenges including being in an area of lakes where there is the risk of flooding.

Cigar Lake has been under construction for seven years with many problems occurring delaying production several times.  One must not forget that the uranium bubble back in 2007 was accelerated when a flood in Cigar Lake was announced.  Uranium ran up to $137 a pound.  One delay or shutdown of a major uranium mine such as Cigar Lake or Areva's Niger Operations could lead to a powerful reversal in the spot price.

Fission may be building the next Hathor which was taken out for over $650 million by Rio Tinto back in 2011 if it is able to acquire Alpha.  From my evaluation the Alpha shareholders should not sell at these levels possibly at the bottom of the uranium market.  This is a buyer's market.

Patience and fortitude should be exercised by shareholders of companies getting low bids.  There are several other juniors I have positions in the Athabasca Basin with smaller market caps.  Some of the teams have geologists I have followed for years with incredible resumes.  I will be highlighting some of those Athabasca stories in the coming weeks.

However, it must be understood that these Athabasca plays are highly speculative, early stage exploration stories with the potential for great gains but also greater risk.  Be careful of promotions and only invest in teams with experienced management.  When everyone is discussing a particular story, look for the next opportunity.

Fission and Alpha are probably unable to advance this project alone and most likely will be acquired by either Cameco, Denison or Rio Tinto.  These Athabasca mines require large miner expertise to be put into production.

This increased M&A activity in the uranium space may be forecasting a potential turnaround.  This sector is trying everyone's patience as the spot price hits new lows and as the masses believe there will be no recovery.

I believe these are the times to buy not sell when the fundamentals are strong, yet the prices are low and sentiment is negative.  The Russian Megatons to Megawatts Deal which supplied 24 million pounds to the U.S. is done.  Reactors are being built all over the world and restarts are beginning in Japan.

M&A activity should increase with not only early stage discovery situations such as Fission and Alpha but with emerging producers such as Uranerz (URZ) and companies already nearing the Feasibility Stage such as Pele Mountain (GEM).  Near term supply should be tight as the Russian agreement expires.  Remember the uranium producers have had to compete with this 24 million pounds of extra supply for twenty years.

One uranium district that has been completely ignored by the investment community is Elliot Lake, Ontario.  I have been writing about Pele Mountain (GEM.V) for years as others ignored this undiscovered situation.  Now a Canadian Financial institution has just published a very positive research report.  View the Jacobs Securities report by clicking here...  The report concludes, "Given Pele’s historic correlation with uranium prices, and the strong uranium fundamentals that we believe could drive prices higher, we maintain our view that investors should consider GEM based on its sizable near-surface resources, well-scoped project, supportive jurisdiction and well understood path to permitting and development. We believe, Pele is positioned for success as a developer of a geopolitically secure supply of U3O8, Critical REO, and scandium oxide."

I couldn't agree more with them.  More than 300 million pounds of uranium were mined in Elliot Lake, Ontario by Rio Algom and Denison Mines.  The Elliot Lake Mining Camp is known as the Uranium Capital of the World and was the only Canadian mine that commercially produced Rare Earth Oxides. 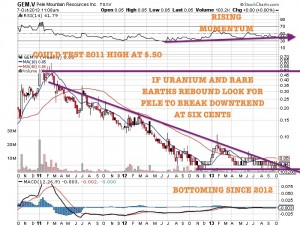 The Elliot Lake mines were closed down in the 90's when rare earths were unknown and worth little and uranium was trading below $20 a pound.  Being a past producing district of both uranium and rare earths gives an advantage to Pele Mountain Resources (GEM.V or GOLDF) a small junior miner, who will hopefully begin feasibility on their enormous and valuable Eco Ridge resource.

Operating in an established, past producing district with power, labor and infrastructure is crucial when evaluating the potential viability of mining development.  Every twenty to thirty years Elliot Lake goes through a boom cycle.  Even though the Athabasca region has higher grade uranium, mining and processing is a lot more challenging.

Pele Mountain (GEM.V or GOLDF) may provide excellent leverage to uranium and rare earths for investors at these discounted levels.  Elliot Lake is a proven rare earth and uranium mining district which is very supportive of Pele Mountain’s Eco Ridge Mine.  See the letter supporting the mine from the mayor and city council by clicking here…

Pele has a proven commercial processing method unlike so many other rare earth juniors of recovering the valuable rare earths used in the latest green energy technologies such as wind turbines and high efficiency lighting.  Pele has the Elliot Lake technical team led by Roger Payne who has the experience designing and developing efficient and safe production of critical clean energy metals such as uranium and rare earths.

When comparing Pele's NI 43-101 compliant resource base to some of the recent acquisition prices of $7-10, Pele is trading for pennies of a penny on a dollar and may provide great leverage as uranium and rare earth prices recover.

Listen to a recent interview with Roger Payne, who leads Pele's (GEM.V or GOLDF) technical team and previously managed Rio Algom's operations in Elliot Lake by clicking here....  He has decades of experience in this region, which could blossom again providing a safe and secure supply of uranium, rare earths and scandium.