Keep Your Head When Others Are Fearful of Precious Metals

"If you can keep your head when all about you
Are losing theirs and blaming it on you...And---you'll be a Man, my son! "

If by Rudyard Kipling

Today a news item from the Wall St. Journal crossed my desk entitled, "A Fearful Time For Gold".  Then I read another article entitled, "S&P500 In Longest Winning Streak Since 2004."  These articles are an indication of what the majority is thinking and may be a contrarian buy alert for my readers.

The majority of investors are usually wrong at turning points.  Many investors are becoming impatient with gold selling into an oversold panic in the miners and looking for the latest fast money scheme in mortgages or real estate.  Be careful of following this emotional move where investors take on too much risk in banks and housing and overly fearful and pessimistic in mining equities.  We are in the midst of currency and trade wars where countries are competing to devalue their currency. 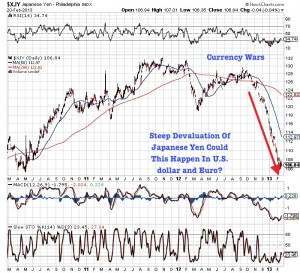 My readers are well aware that the role of the media is to confuse and misdirect the average investor. Be careful of the media's job which is to sell the popular news of that day for the masses.  Many times the cover stories are a reflection of the majority view, which is usually wrong.  Behind the scenes the world is in the midst of competitive currency devaluations.  The Japanese Yen is in free fall and the West must compete which could put downward pressure on the U.S. dollar and Euro.

However, the news fails to discuss what the implications of trade wars and the impact on currencies can have to investments. Instead they like to publicize pundits who are speaking about if the Canadian Venture exchange can be saved or discussing  a complete collapse.  In my opinion, this is characteristic bear market talk, capitalism and metals exploration are not ready to run for the hills especially as we have a lack of available supplies in uranium, rare earths and precious metals.

Usually these pessimistic doom and gloom comments signal a contrarian bargain buying opportunity.  In fact, I have spoken with many mining executives who have been in this business for 4+ decades and they have commented that they have never seen pessimism in the sector like now.  There are several mining companies whose market cap is just a fraction of their Net Present Values from third party independently verified economic assessments.  Never have they seen this disconnect.

Just like we had irrational exuberance on the upside with tech and real estate this past decade, we are witnessing illogical fear in the junior mining sector.  In due time, investors will look back at this time and be amazed at some of the values.

We feel that it is only a matter of time before the precious metal, rare earth and uranium miners themselves participate in reflecting this bull market in other areas such as banking and real estate which are being manipulated higher by Central Banks.   Capital will eventually flow to quality.

Many miners are reporting earning surprises beating analyst estimates and breaking into new highs.  The large gold mining companies have taken write downs.  The majors are desperate for resource growth at a time when new discoveries are at an all time low.  While the large gold miners are testing lows, some of the big industrial miners are outperforming the S&P 500 and hitting new 52 week highs. 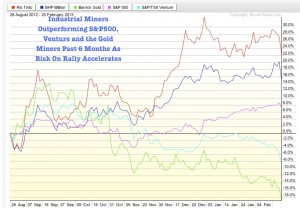 The majors are becoming less picky and some of the undervalued juniors sitting on developing mines may attract the hungry giants who may pay exciting premiums.  Do not forget many of these majors are sitting on large holdings of U.S. dollars, which is increasingly losing value.  They must work speedily to transfer that capital into resource growth.  Many of their large and high cost miners are riskier then some assets being held by undervalued juniors.

I have learned through experience that following the majority or the mass media is dangerous.  How soon we forget the tech collapse where many of our colleagues who became day traders and web entrepreneurs were wiped out.  The housing crash is almost completely forgotten by the mainstream media or the average investor.

Many of my contemporaries who became mortgage agents or real estate brokers are getting back into the real estate business as the Fed has been throwing tons of fiat dollars into those markets.  Be careful of a double dip in the housing market as there is still a huge inventory of homes and condos which have not hit the market.

Despite these two major bubbles just in the past 15 years, some pundits claim we are in a gold bubble despite the miners being at record low valuations.  Most of my friends in the mining industry are 60-90 years old and they are concerned that there may be an entire generation that is not well equipped with the ability to explore and develop mining operations.  There is a huge generation gap and a lack of technical skill with few discoveries being made despite record exploration budgets.

Just like the .com bubble or the real estate bubble, there will come a time when all your friends will be discussing mining stocks or going into the mining industry.  We are far away from that time as the majors trade at a record discount P-E Ratio compared to the S&P500.  When your taxi driver starts talking gold stocks with you that is the signal to take profits and that we may be near a bubble.

Recently, sellers predominantly large hedge funds who have been highly leveraged to the price of gold are rushing to the exits as margin calls and fund redemptions increase.  This is a shakeout of the weak hands before a potential breakout move which may be completion of basing process.  While many are discussing the death cross on gold, they fail to speak about the death cross in long term treasuries.  This may be indicating increased risk appetite and a rotation into equities.

Many times bottoms come with capitulation or panics as investors rush to get out at any prices.  Usually after capitulation great bargains are available.  Remember we are witnessing increased margin calls and commodity fund redemptions that is causing forced selling. 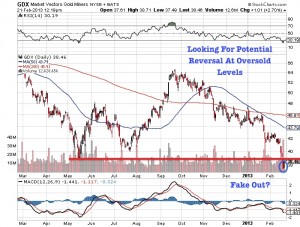 After these volatile periods, major reversals tend to occur, which I will be monitoring for in my newsletter.

Many precious metals investors are scared and beginning to panic.  We are witnessing a selloff in precious metals and miners as the general equity market continues to move parabolically higher.  More specifically the mortgage, bank and homebuilders are leading the overbought rally.

Investors are confused as these are the sectors which almost caused the entire capital system to almost collapse.  Massive bailouts, mark to market and refinancing debt at artificially low interest rates have been tools to manipulate these sectors higher.  For a few weeks, I have been warning my readers about the extremely overbought conditions in the general equity market despite a weak economy and the risk of hyper-inflation. 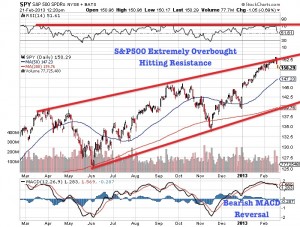 On October 4th of 2011, I called for a major risk-on rally.  See the video analysis from back then by clicking here .  At that time I wrote, "The S&P 500 had a powerful reversal and showed the first major day of buying since the August Crash.  Chart patterns indicate that a potential low could have been placed this week."

That in fact was the major bottom as easy money from the Fed stealthily boosted the toxic housing and financial stocks, while hiding inflation.  In fact, since that time the best performing industries have been mortgage finance, home improvement retailers, real estate investments and U.S. Banks.  These are the same toxic sectors that caused the crash and has trillions of dollars thrown at it to prevent a depression.

Last year I spoke at PDAC in March of 2012 and was quoted in Bull Market Run as saying, "“The risk-on rally began in early October due to record breaking stimulative measures, actions from the ECB, China, the U.S. and Japan…it’s very hard to fight the Federal Reserve which is constantly pushing money into the system…this run into cash and treasuries, this irrational run in 2011, was really a very dangerous move and there are a lot of investors still on the sidelines, a lot of capital that’s going to come back into the market…"

Now we are witnessing the capital come back into the market but it has not trickled down to the junior miners.  The housing etf (XHB) is up over 110% while the major gold miners are down 25%.  This divergence may only last so long.  Investors will one day realize that the Central Banks actions over the past 5 years could have long term hyper-inflationary consequences which could be devastating to the next generation.

This is why I encourage you to be cautious as the Dow breaks above 14,000.  The general equity market is overbought and may soon be reaching a top.  The U.S. dollar may soon break 52 week lows and continue downward in its secular bear market following the Yen lower.  The underlying economic foundation is shaky as unemployment and government debts continues to soar.

First we had the bonds rally in 2011, then the equities for close to 15 months and a major move may soon be coming in the commodities and junior miners possibly even greater than 2009-2010 after the 2008 decline.

Usually when bonds and stocks rally together and commodities consolidate like they did in 2011-2012 it forecasts a hyper-inflationary rally.  We may be on the verge of that great rotation into the junior miners in 2013, so hold tight and keep your head  even when all around you are selling and losing theirs.

Do not forget the discounted junior miners who are searching for real wealth in the earth.  It may happen sooner rather than later that the large amounts of capital being put into the housing and financials will rotate into commodities.