The U.S. election results are in.  The people have chosen.  Subscribers are well aware of the changing rules of the game will conform to the latest economic developments.  There may well be a period of negativity relating to the general markets due to the U.S. election, Fiscal Cliff and Year End Tax Loss Selling.  We may see both parties come to some sort of conciliatory agreement to save the holiday season.  This is known after the election as the Honeymoon Phase, when previously antagonistic parties feel the need to think "Can't We All Just Get Along!"

What should investors in the precious metals market do next on this wave of Obama's win?  The way we see it is to wait for any initial reaction of pessimism to subside.  Precious metal devotees are a special breed that still must operate within basic rules of the game.  What is the market signaling to us?

Immediately after Obama's victory, there has been a selloff in the general market.  Note carefully that gold and silver has held up well despite a significant decline in the Dow Jones Industrial Average and S&P 500.  The market will do whatever it can to confuse, misdirect and obfuscate.  The recent decline in the S&P500 not only was unmatched by the action in gold, but we note silver is outperforming as well. 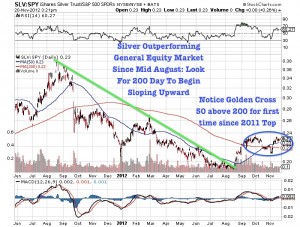 What could the recent market response tell us as to what our next move in the gold market might be?   Possibly, reverting to one of our favorite mantras: "Patience and Fortitude".

We may well be witnessing negativity as being the abdication of disgruntled Romney supporters.  This is generally the standard reaction of depressed players quitting the scene at the wrong time.  But, hey, this is a psychologically skewed, emotional reaction to leaving the battlefield.

Napolean was famous for having said, "One engages then one waits."  Similarly, as precious metal players we have taken our positions and hopefully buy and hold along the secular upward charts may turn out to be the prudent course. 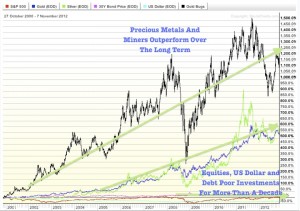 Miners and precious metals have outperformed over the past decade and may do so for a considerable while longer as we are nowhere near bubble territory.

At this point it is important to address the implications to our subscribers of the "fiscal cliff".  Remember that our representatives have been revealed as active shareholders in the purchase of stocks that drive our economy.  When Jamie Dimon was being questioned by the committees, it was instructive to learn that the very inquisitors owned many of the stocks under surveillance.  Speak of conflicts of interest!

Seemingly forgotten has been the activities of Governor Jon Corzine and MF Global with the missing hundreds of millions of dollars, which apparently have gone up in cigarette smoke.  The elites are not about to rock and sink the boat.

It might be a pleasant surprise to see them finally get down to the business of the nation in addition to their own interests.  How refreshing it would be for both parties to join in reducing the budget deficits before the possibility of a Holiday catastrophe?

The pressure is on for our reelected President and the Lame Duck Congress to avert the Black Swan.  Any move short of reconciliation might not only risk another recession, but also question the viability of the American Economic System.

The question arises, in the long term, will these conciliatory measures work or are they destined to be short term bandaids?  Our national debt is at least 16 trillion.  Could it be this increasing shift to soft money may be too little and too late?

After all there is only so much you can blow up a balloon before it bursts.  Close to 23 million people are unemployed in this country and close to two-thirds of our citizens don't pay income taxes.  If we are believers in hard currency such as gold and silver then the printing presses will be turned on even higher to attempt to satisfy our soaring debts and artificially boost the economy.

However, there may be another side to this story.  Could it be that the proponents of entitlement have voiced their feelings in this recent election?  The majority of the American People may well be in favor of priming the pump to satisfy their lifestyles.

We have become a nation of debtors.  Between mortgage, student loan and credit card debts the average citizen owes over $50,000.  To a certain proportion of our nation free and easy fiat money may well be the way to go in the short term.

Eventually, the piper must be paid.  We may have to face one day that the party is over.  Our large creditors such as the Chinese are already looking to diversify away from U.S. debt and the dollar.

Our critics have felt that our patience with precious metals positions are not buy and hold, but buy and hope.    So far our long range charts signal that gold and silver are in a continuing bull market, which are sometimes obfuscated by a concentration on the short term tactical decisions.  The technical picture reveals the opposite. 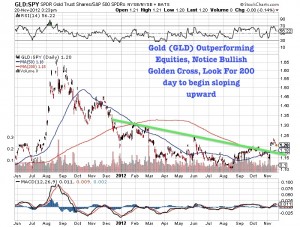 Gold is outperforming and may continue to decouple from the equity markets.  Remember inflation and uncertainty is bullish for precious metals and bearish for the general equity market.  Are we beginning to witness this phenomenon?

The lame duck may well throw a life preserver to the black swan to keep it afloat temporarily.  However, the golden eagle and the silver loony are hovering overhead.  Gold and silver are making cup and handle patterns which is historically indicative of major breakouts.