The  mixed action in the rare earth sector may be highlighting one company which has been outperforming and making significant progress.  Suffice it to say that we hope to publish this update on the rare earths that will suggest to our subscribers the positive direction in which the sector is heading, especially as we witness the U.S. Department of Defense take a step in reestablishing American rare earth independence.

I wish good luck to those who were boasting their short trades in the rare earths and paper profits.  This may rapidly be coming to an end as the heavy rare earth sector is about to reverse higher as Western Nations take a stand and develop their own supply of these critical materials crucial for our latest military technologies such as drones, stealth helicopters and guided smart missiles.

We expect a significant rally in this sector which being thinly traded might place the short sellers in peril as they attempt to exit their positions.  Sufficient volume may not be there to give the naysayers enough exit room through which to leave the theater once the word fire is realized.  We are witnessing global currency wars, trade wars and territorial disputes in the South China Seas.  Tensions between China and Japan have increased over many issues but are extremely focussed on expanding their natural resources for which they are desperately looking around the world.

Gold Stock Trades expects a turnaround rally in this wildly oversold resource area, which is still relatively unknown by the public crowd.  There are developments that may be reversing the 18 month basing process and indeed trap the disbelievers.  Included in these possibilities is the bearish sentiment that the less advanced rare earth companies have inadequate cash reserves needed to proceed with development.  This interpretation may have been  advocated actively by the larger cap Molycorp(MCP) and Lynas (LYSCF) who is deficient in the heavy rare earths.  This thesis did not take into consideration the distinction between heavy and light rare earths in coming to their conclusion. 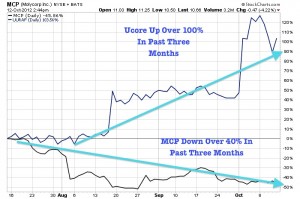 Technically the charts of one of our favorite heavy rare earth selection Ucore is outperforming the giants, demonstrating excellent relative strength compared to the more advanced light rare earth companies (Molycorp), whose claim to the heavies remains to be substantiated.  The next move is up to Molycorp to inform the investorate as to the nature and source  of this purported new motherlode.  Subscribers are aware that we have been presenting Ucore (UURAF or UCU.V)  as one of our choice selections.   The current breaking news vis a vis the U.S. Department of Defense (DOD) vindicates our faith in the Ucore story. 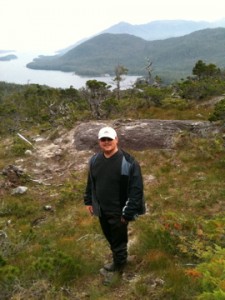 In August of 2011, your editor decided to see for himself  Ucore’s Bokan Mountain property.  We liked what we saw technically and fundamentally.  Subsequently we visited Hazen Labs in Denver, Colorado, which confirmed our analysis that something was brewing.  All that was needed to put the puzzle together was U.S. Government participation.  We got it the other day.  Streaming over the wires was “U.S. Department of Defense Contracts with Ucore”.  This decision by the U.S. Government to support Ucore’s development may have been solidified by the recent news that was published that Ucore has separated dysprosium at the lab scale.  Dysprosium is crucial to the military.  This is a major advancement in Western rare earth technology to be able to isolate dysprosium from ore.  The Department of Defense will be working with Ucore to take this to a pilot plant stage.  Some of the recent metallurgical announcements using Solid Phase Extraction or Polymer Nanotechnology will be incorporated into Ucore’s upcoming Preliminary Economic Assessment which should be published shortly.

In all of my years I can't recall a governmental agency especially one as large as the U.S. Department of Defense come right out and adopt a mountain.

See my recent video with CEO Jim Mckenzie below.

Subscribe to my premium service to be the first to receive my reports by clicking here...

Disclosure: Author Is Long UURAF and Ucore Is A Featured Company On goldstocktrades.com