Quantum Rare Earth Development Corporation (QRE:TSXV or QREDF:OTC) possesses the rights to the only 43-101 compliant resource of niobium in the United States at its Elk Creek Project in Nebraska. 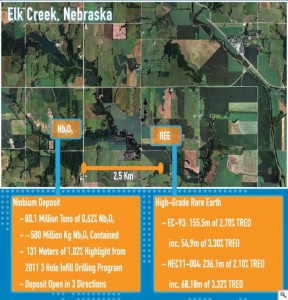 In this age of energy conservation intrinsic in the production of lighter and stronger metal alloys, niobium presents itself front and center.  It appears on the government’s short list of essential metals.  The automotive industry requires cars that are lighter which increases fuel efficiency.  At the same time a car must be produced with bodily strength to adhere to safety targets.

This is where niobium enters center stage.  When alloyed to steel, niobium increases strength of the metals, while at the same time reduces its total weight.

There are competing products such as vanadium and molybdenum, but it is difficult for them to challenge niobium in the new high tech world associated with the automotive industry and construction of natural gas pipelines.

Astonishingly, 100% of niobium is currently being imported to the United States.  This is a far cry from energy independence.  Perhaps this may explain the Department of Defense which recognizes a crisis in formation.

Let’s see how Quantum Rare Earth Development could provide the answer.  The Elk Creek, Nebraska resource is in an ideal location.  It is smack in the middle of farmland through which major roads and rail lines are available for Quantum’s expansion.  It is located in a friendly jurisdiction which has state and local support for the Elk Creek Mine. 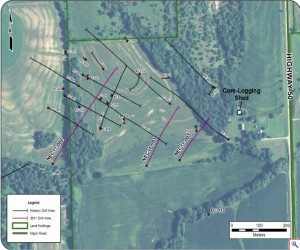 They had a stated 80.1 million tons at 0.62% niobium, which had the potential of rivaling Iamgold’s Niobec Mine at much less capital expenditures.  In the summer 2011 drill program Quantum hit some high grade niobium which has been factored into a new resource estimate published today which significantly added tonnage and grade.  The highlights included :  Addition of higher grade indicated status tonnage of 19.3 Mt grading 0.67% Nb2O5 and an increase in inferred status tonnage and grade from the previous resource estimate (News Release dated April 28, 2011); from 80.1 Mt grading 0.62% Nb2O5 to 83.3 Mt grading 0.63% Nb2O5. 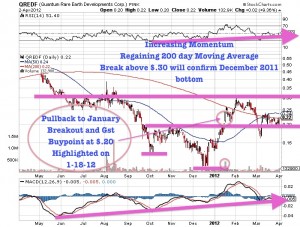 A year long downtrend has been broken and the trajectory is upward at this point as it regains its 200 day moving average.    Volume is increasing and Quantum should be bought on pullbacks.  However, a runaway move is possible imminently upon publication of this updated resource estimate and results from metallurgy.

Meanwhile, the giant Iamgold is sinking $950 million dollars into Niobec in Quebec over the next three years which is lower grade.  One conjectures that there may be another mining giant out there willing to enter the highly profitable niobium market inexpensively.  The possibilities are present. 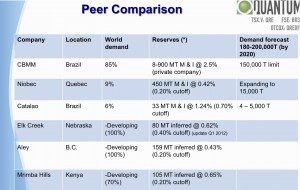 Quantum's resource is the highest grade primary niobium deposit under development in North America and the only major deposit of Niobium in the U.S., where 100% of this strategic metal is imported.

Listen to my recent interview with CEO Peter Dickie below.

Disclosure: Long QRE.V and QRE is a GST Featured Company

Please do your own due diligence before making any investment.