For years I have highlighted a strategic metal called niobium. See my recent article on the topic by clicking on the following link below:
http://seekingalpha.com/article/2288223-the-west-must-look-for-a-secure-supply-of-niobium

Recently Iamgold sold Niobec, one of the largest niobium mines in North America for $500 million cash and an additional $30 million once it comes into production.

This could be a huge boost for Niocorp (NB.V or NIOBF) which is up over 536% over the past two years while the TSX Venture has lost close to half its value.  See one of our first reports on Niocorp when it was still called Quantum Rare Earth Development from over two years ago by clicking here...

This outperformance over the past two years could be due to Niocorp being run by veteran miner Mark Smith, the former CEO of Molycorp. The sale of Iamgold's Niobec gives investors and analyst a valuation benchmark to be used when comparing Niocorp's Elk Creek
Deposit. 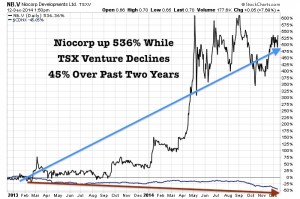 According to Niocorp CEO Mark Smith, the Niobec sale "demonstrates the strong demand and understanding of the strategic nature of niobium."

Even though the precious metal and junior mining sector have been in decline for the past few years, there have been a few exceptions due to the high quality of both the management team and the asset. One of the areas of strength has been in a relatively unknown metal known as niobium. What is niobium and why is it so important?

Niobium is critical for high strength low weight steel that is required in the automobile, infrastructure and aviation industries. Niobium prices have increased steadily over the past 40 years, but may move higher at a faster rate as niobium demand is increasing due to its ability to reduce consumption of energy. A little niobium decreases the weight and increases fuel efficiency.

One of the junior niobium miners, Niocorp (NB.V or NIOBF) has been one of the best performers on the TSX Venture over the past year. The main catalyst was attracting top notch CEO Mark Smith who brought Molycorp's (MCP) Mountain Pass Rare Earth Deposit into production.

Mark has decades of experience of bringing mines into production. Mark put his money where his mouth is and bought a large position over the past year in Niocorp which is developing North America's largest and highest grade undeveloped niobium deposit near Elk Creek, Nebraska.

Mark has put together a quality team to advance the project towards a Bankable Feasibility Study. Niocorp is currently drilling a 3 stage program to move the resource from inferred to measured and indicated. The recent drilling program has been a huge success hitting some of the highest grade assays ever recorded at the project. Major players should begin noticing this high grade niobium material.  Recently Niocorp engaged a firm "exploring the option of listing its securities on a more senior North America stock exchange."

As Mark Smith, CEO of Niocorp said in the recent news release on the second stage drilling program,
“The final Phase II drilling results continue to be extremely encouraging and supportive of our project...I could not be more pleased with the overall high-grade assay results that have been delivered from both our Phase I and Phase II drilling program at our Elk Creek deposit...Third Phase drilling will be completed by mid-December 2014, and we are anxiously awaiting the upcoming analytical results.”

It appears the grades are higher at depth where the deposit remains open. In addition, there are additional targets to the southeast and northwest of the deposit.

In conclusion, Niobium demand has been increasing for the past 40 years and should accelerate as demand is increasing for high strength low weight steel. Niocorp could be one of the largest suppliers of niobium in North America and take advantage of the increased consumption of niobium. Recent results both with the drill and on the metallurgy could attract significant strategic financial partners on this project in the coming months.

Mr. Smith is well recognized in the mining community, having recently served as CEO and Director of Molycorp, Inc., where he was instrumentally involved in taking that from a private company to a publicly traded producing mine. Prior to that, Mr. Smith was the President and Chief Executive Officer of Chevron Mining Inc. and managed the real estate, remediation, mining and carbon divisions of Unocal Corporation for over 22 years. During his tenure with Chevron Mining Inc., Mr. Smith also served as a Director of Companhia Brasileira de Metalurgia e Mineração (CBMM), part of the Moreira Salles Group, a private company that currently produces approximately 85% of the world supply of Niobium. Mr. Smith has a Bachelor of Science degree in engineering from Colorado State University and a Juris Doctor cum laude from Western State University, College of Law. 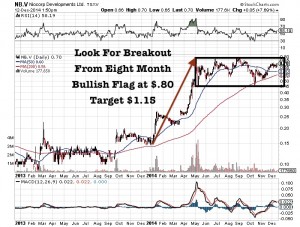 Niocorp is forming a potentially bullish flag pattern for over eight months.  Look for a breakout into new highs at $.80.

See my recent interview with Niocorp (NB.V or NIOBF) CEO Mark Smith by clicking on the following link.

Disclosure: I own Niocorp and they are a website sponsor.