Last week before the jobs report on Friday I wrote an article that concluded, “The weakness in the dollar will also put hawkish pressures on the Fed. Many are expecting more quantitative easing but the market may have a surprise if the Fed changes its language to support the dollar and curb the speculation into gold and silver.” (See Will Tomorrow's Job Report Be Bullish for the Dollar?) Today, one week later, Ben Bernanke said, “...factors have dictated that the FOMC proceed with some caution in deciding whether to engage in further purchases of longer-term securities.”

This was a major change in the language and came in at a crucial time to support the US dollar from entering new all-time lows. Pressure from the rapidly declining dollar led Ben Bernanke to also speak today about not knowing the economic effects of these policies. This sent long-term treasuries lower along with housing and financials. The dollar gained some strength over the cautious statement.

I believe he's well aware of the economic effects which are clearly being felt in the markets, a deteriorating dollar, higher prices of commodities, and an extremely weak recovery with high unemployment. Now I'm also seeing signs of a collapse in long-term Treasuries through two factors -- less demand from foreign buyers and less purchasing power by the Fed. One of the actions the Fed has been doing to keep interest rates low to stimulate growth is buying long-term Treasuries. However, the market is nervous that the Fed may be cautious of the extent of those purchases.

Although Bernanke indicated there are some very large deflationary pressures, the long-term Treasuries are indicating that it will be much harder for the Fed to raise its debt at these low rates. The long-term Treasury market is indicating that the spending and deficits the US is getting itself into may demand higher interest rates. The US is selling a huge supply of Treasuries to finance the debt it's using to spur economic growth. This is creating an artificial glut and demand seems to be decreasing -- especially since many investors are moving into precious metals and natural resources as the safe haven at the moment. Long-term Treasuries were a safe-haven asset during the credit crisis of 2008 and the recent European sovereign debt crisis. However, the long-term Treasuries are showing signs of weakness as investors are losing faith in the financing of record deficits and a pullback of purchase by the Fed.

We may be approaching a significant decline in long-term Treasuries which could send long-term rates higher. These higher rates could continue to put pressure on the housing market. Many homeowners are unable to take advantage of record low interest rates to refinance due to negative equity. Now with higher rates this will continue to put pressure on the housing market and bank stocks which haven't confirmed this recent rally in the equity. Please see Treasuries Break Long Term Trend Support as Gold, Silver Rush Continues where I discussed the potential breakdown of US Treasuries. Their recent lack of participation in the market rally indicates that the housing and financial crisis isn't over yet. Defaults are expected to rise with higher interest rates on adjustable loans. 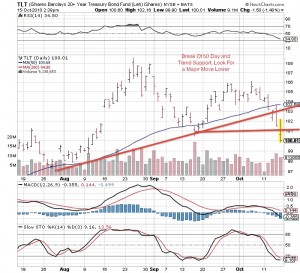 I believe that interest rates will start moving higher and we may see a major collapse in Treasuries, housing, and financials over the next couple of weeks. The long-term Treasuries have broken trend support and the 50-day moving average is on high volume. Now is an important time to prepare for a rise in interest rates during a weak economy.