A Healthy Pullback In Gold And Silver, Will Produce Next Buy Signal

Treasury Secretary Timothy Geithner is trying to give support to the currency as tensions have grown on a devalued dollar. This past week he stressed the importance of a sound currency. The US definitely wants to devalue the dollar in a slow and steady way. The plunge in the US dollar, which is still the world’s reserve currency, created a lot of international tension and speculation into gold and silver. The Fed wants to slowly devalue the dollar, not create a panic. If it's collapsing too far, too fast then the Fed or Geithner will come in and make comments to support the dollar. The November election and next week's Fed meeting could make a significant impact on the bullish dollar trade. I believe the fiscally conservative candidates will gain a lot of support. This could have a bullish impact on the dollar as an expectation of less spending and printing will provide some support for the dollar.

The collapse of the dollar has caused other countries such as Japan to intervene in the markets to support the US currency as a weak dollar curbs demand for Japanese exports.

Although I've called for a dollar bounce over the past week I want to reiterate that I don't believe the move will be long-lasting. The currency crisis is in early stages and quite often there are violent corrections that provide long-term holders a great buying opportunity. Investors should be aware of the massive buying in the dollar ETF (UUP). This signals a major move going into the dollar as it tests all-time lows. It could signal a bottom. 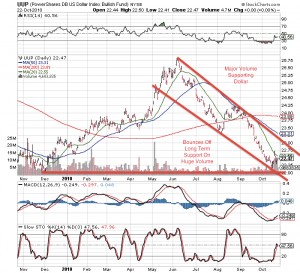 This bounce in the dollar and correction in gold is to shake out weak hands from the long-term trend. It also hurts investors who have been buying in at very overbought levels. Throughout this 10-year bull market in gold it has been a series of two steps ahead with one back. Now we're in the retrenching stage, which is what I warned about exactly two weeks ago. Major moves when sentiment levels reach extremes is accompanied by powerful reversals, which we've observed this past week in the dollar and gold. This past week we saw a major gap down and a break of the 20-day moving average. I do believe this short-term downtrend could continue for a few weeks to work off overbought conditions and to shake out late comers and investors who are over leveraged.

Look for gold and silver to move to support and create a new buy signal. Patience is key to buying gold and there continue to be times along this bull run where gold is oversold and out of favor. I'm looking for those key areas.