In the late 1990's when gold was at major low, Central Banks were liquidating their gold holdings and investors became completely disillusioned with junior gold exploration after Bre X I decided to go against the consensus at that time.

My friends went off to study computer science but I went into mine development and engineering.  I became horribly depressed around academic engineers in university as the culture at that time was very negative and a lot of the professors at that time were recently laid off by major producers.  It was a negative atmosphere and professors were actually discouraging me from the profession.

I then decided to look for real world engineers and financiers still making it in the business.  I started going to investment conferences and met people like Rick Rule, Rob Mcewen, Bob Quatermain, David Tice, John Doody, Jay Taylor and that is where I saw academics turned to a real world hypothesis with money on the line.  I met the top scientists and financiers who believed they would make it big and gold would turn!  It did.

A lot of those stocks went from pennies to tens of dollars and I thought I was smart eventually quitting my job to blog full time and that is exactly when gold corrected.  I lost almost 90% from the highs.

I thought it would be a year or two correction but it lasted more like 8 years and now we are finally breaking out into new multiyear highs.  It was long dark winter of a bear market.  But I continued buying after failure and investing in scientists I believed in.  Now it looks as though spring has arrived and the seeds we planted are sprouting.

Gold is on the verge of hitting new highs and palladium has surpassed those record highs soaring past $2k.

We may be on the verge of that next run in the junior miners like we saw almost 20 years ago.  The Iran-US tensions now after the death of the Iranian General is the worse since 1979 when gold soared last time.

Now even Iraq is turning over to Iran against US asking troops to leave.  It seems Obama's appeasement is all null and void now as they are threatening nuclear war again.

The tensions now especially around Strait of Hormuz is greater than that of the beginning of the Iraq War in 2003.  Gold benefits during times of financial uncertainty and war.  So does palladium which continues to tighten and move parabolic.  Silver looks strong too hitting almost $18.50. 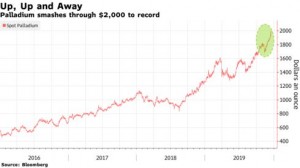 Unlike many metals I can't find palladium projects for development especially with no royalties or streams.  One that I have featured for months just came out with economics (PEA) today.

The chart looks amazing and I can't find any other junior like this.  If you can find another palladium junior in North America with these economics please tell me!  Its hard to find a project that could average 200k palladium eq. ounces annually over 14 years at an all in sustaining cost under $600 an ounce. 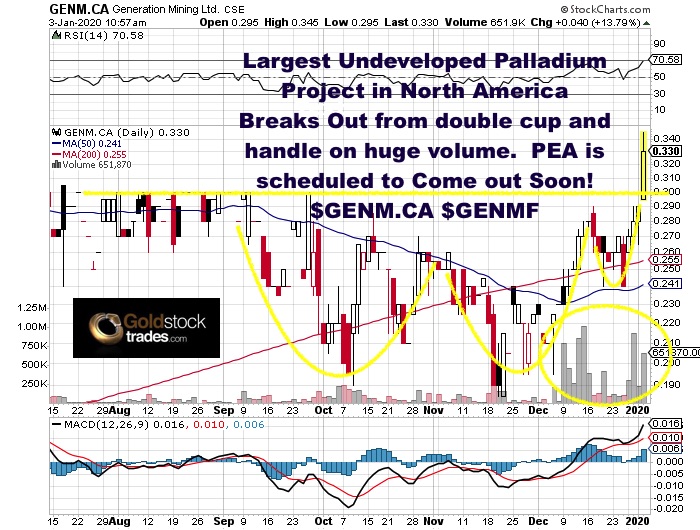 Please remember this is just the base case!  The company hasn't included all the recent drilling from additional deposits.  Don't discount the fact that North American Palladium was just taken out.  I have a feeling this could be candidate.  Check out my recent interview by clicking here...

Please note for full disclosure I am a shareholder and they are a Goldstocktrades.com sponsor that means I have a conflict of interest.

Assume Author (Jeb Handwerger) owns shares and that I want to sell them for a profit.  I may have received or intend to receive compensation for digital marketing services from these companies.  The content of this article is for information only. Readers fully understand and agree that nothing contained herein, written by Jeb Handwerger about any company, including but not limited to, commentary, opinions, views, assumptions, reported facts, calculations, etc. is to be considered implicit or explicit investment advice. Nothing contained herein is a recommendation or solicitation to buy or sell any security. Author is not responsible under any circumstances for investment actions taken by the reader. Author has never been, and is not currently, a registered or licensed financial advisor or broker/dealer, investment advisor, stockbroker, trader, money manager, compliance or legal officer, and does not perform market making activities. Author is not directly employed by any company, group, organization, party or person. The shares of these companies are highly speculative, not suitable for all investors. Readers understand and agree that investments in small cap stocks can result in a 100% loss of invested funds. It is assumed and agreed upon by readers that they will consult with their own licensed / registered financial advisors before making investment decisions. Readers understand and agree that they must conduct their own due diligence above and beyond reading this article. Author is not responsible for any perceived, or actual, errors including, but not limited to, commentary, opinions, views, assumptions, reported facts & financial calculations, or for the completeness of this article or future content. Author is not expected or required to subsequently follow or cover events & news, or write about any particular company or topic. Author is not an expert in any company, industry sector or investment topic.