Junior Uranium Mining Breakout in Second Half of 2015?

The big story over the second half of 2015 could be the junior uranium mining breakout, which I expected could be accelerated by moves from emerging economies such as China and India.  The recent deal between Canada's Cameco and India could be the catalyst as highlighted in my previous article.  I was quoted in Marketwatch and The Daily Reckoning stating my beliefs that large gains could be made in the nuclear energy sector in the second half of 2015. 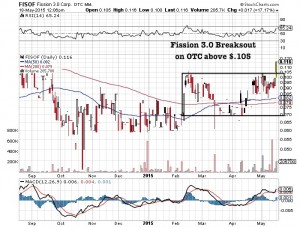 Keep an eye on Fission 3.0 (FUU.V or FISOF) which may just be breaking out of a cup and handle.  Fission 3.0 has the same management team that found Patterson Lake South and the J Zone Discovery sold to Denison for top dollar.  They have $5 million in cash and are sitting on 16 properties totaling over 183,000 hectares in the Athabasca Basin.  As the uranium market heats up I expect other juniors to partner with Fission's proven management team to joint venture these opportunities. 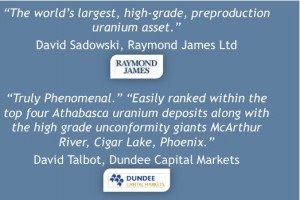 Despite the once in a millennium Fukushima disaster which pummeled the nuclear (NLR), uranium spot price (URPTF) and the uranium miners (URA), one junior uranium management team has been able to outperform and build a market cap of over $460 million CAD while the rest of the sector was decimated.

Investors are increasingly attracted to the Fission team as they continue to provide long term wins such as Strathmore which later became Energy Fuels and Fission Energy which was bought out by Denison.  I believe Fission Uranium (FCU.TO) could be the next big takeout target as they have delineated a massive high grade-open pit target in the uranium rich Athabasca Basin.  A Preliminary Economic Assessment (PEA) is currently underway which I am quite excited about as it could show that their discovery may be the best uranium development project in the World.

Fission Uranium (FCU.TO or FCUUF) has made one of the greatest uranium discoveries in the Athabasca Basin in history at Patterson Lake South on the southwest side of the Basin.  Its announced a huge high grade resource of around 110 million lbs in January with most of the deposit extremely shallow less than 250 m deep.

The PLS discovery is growing and should provide great leverage as uranium rebounds.   Fission is continuing to surprise the market to the upside announcing new high grade areas and continuing to expand.

As the uranium sector turns around I expect Fission Uranium's PLS discovery to be sold to a major such as the Chinese, Cameco, Areva or Rio Tinto.  Interest in the form of an acquisition or strategic equity position is probable.  Attention should turn to the next big discovery following PLS especially in Canada's Athabasca Basin which have the highest grade and largest uranium deposits in the world.

Capital should seek out this talented Fission management team which has a track record of building shareholder value through acquisitions by companies in the past such as Denison and Energy Fuels.

Disclosure: I own Fission and Fission 3.0. Fission 3.0 is a website sponsor. Please do your own due diligence as I am not a registered financial adviser and would benefit if Fission or Fission 3.0 move higher.